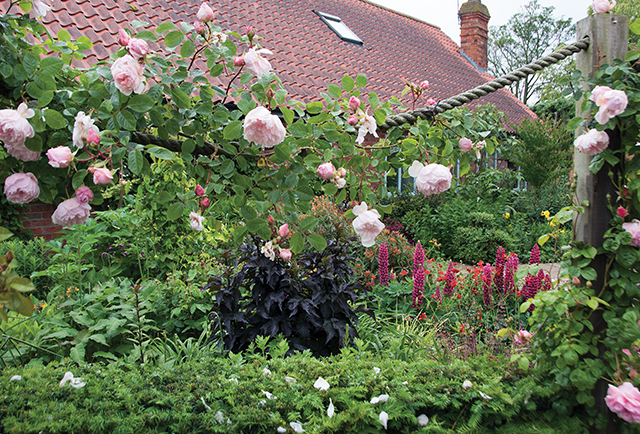 Steffie Shields talks to Nikki Applewhite, co-founder of G.R.O.W. a new charity to improve hospital grounds and make a difference for Lincolnshire patients.

In December 2017, Emmy Shelton, working for garden designer Nikki Applewhite, came across a Twitter feed asking for local businesses to ‘adopt a garden’ at Grantham Hospital. As the New Year dawned, the local press spread the word. Despite ongoing administrative, budget and staffing problems facing the United Lincolnshire Hospitals NHS Trust (UHLT), volunteers were being sought to take over neglected outdoor areas around Grantham Hospital. It sounded positively worthwhile.

Nikki and Emmy are equally passionate about gardens. Intrigued, they attended an initial meeting in February 2018, to discuss the project, together with representatives of various interested organisations, including Lincolnshire Gardens Trust (LGT) and ‘Mens Shed’ Grantham, (the latter based in Dysart Park, and currently engaged in crafting bird boxes for the park.) LGT trustees supported the attractive project in principle. ‘Creating a garden’ would stimulate local interest. However, more than volunteer amateur gardeners’ enthusiasm and donated plants etc, such a scheme would need leadership, a cohesive design, professional skill and real commitment for future maintenance. Necessary funding would be considerable.

As it happened, Nikki was facing a personal health challenge. Coincidentally, she was attending Grantham Hospital regularly to undergo radiotherapy for breast cancer. Though fulsome in praise for the doctors and nurses, her professional eye had not failed to notice the depressing state of the grounds. Concentrating on resolving her hospital’s environmental problem might give her another focus, to see her through treatment and, she hoped, perhaps even contribute to her own healing.

By March, a second UHLT meeting assured Nikki that legislation could be sorted, and an area outside Ward 6 was chosen for the first garden development. After a site survey in April, by May, she had produced a concept plan for the garden. Wide paths suitable for wheelchairs would also enable access for bed-ridden patients to be wheeled out into fresh air and sunshine, while the garden’s year-round interest would both attract wildlife and engage children.

Nikki admits to naivety. Having drawn up a practical design, she thought she could simply employ a contractor and hey presto, job done! Life is never that straightforward. With budgets so stretched that even grass mowing proves a problem, the NHS has other priorities: protocols and, understandably, health and safety. Nevertheless, considering the positive feedback, the Applewhite team wanted to roll out their concept across all Lincolnshire hospitals. They began fund-raising. Then, in August 2018, the UHLT staff member responsible for the initiative, Sharon Hurrell was promoted and moved. With communication broken down, progress came to a grinding halt.

I have had the pleasure of knowing Nikki for a long time. I marvelled at her brave determination. She reminded me that her maiden name is ‘Grantham’ with the confession: “I did this project out of being totally frustrated and annoyed, more than anything!” Undaunted, she went to the top. The UHLT chief executive promised to clear up any outstanding legal and health and safety issues. By October, legislation was almost in place. In November, she was delighted to meet Tracey Pemberton, the nurse in charge of Ward 6, specialising in stroke rehabilitation and respiratory patients. Tracey suggested putting patio doors for the ward to open directly onto the garden.

Applewhite Garden Design is a small company compared to the big machine of the NHS. In view of the encouraging support from the community, setting up a charity seemed the only way forward to facilitate the work. With little idea how to do this, besides copious form-filling, Nikki set about raising the substantial sums required. Other Olympian high hoops to jump included the Charity Commission’s insistence on an initial £5,000 in the bank, and a minimum legal obligation for at least four trustees to push progress. In December 2018, G.R.O.W. was founded with a clear philosophy: Gardens Restore Our Wellbeing. By January 2019, less than a year since leaping in with both hands, they launched the new charity publicly complete with logo and website. Twitter, Facebook, and LinkedIn pages appeared, as if by magic, all linked to the essential G.R.O.W. page on Justgiving.com.

Grantham Journal gave helpful publicity. The League of Friends of Grantham Hospital donated “a huge amount of money: £ 9,500” to cover the cost of hard landscaping, plus a bench in memory of nurse Jean Savile. Nikki is staggered at the generosity of the townspeople who care about their hospital.  By opening her own garden, together with a silent auction and a fun quiz night hosted by the Brownlow Arms at Hough on the Hill, Nikki and Emmy have raised a remarkable £16,000 thus far, giving many residents renewed hope for their hospital.

In July 2019, one of the first jobs in post for ULHT’s new chief executive officer, Andrew Morgan, was to secure the licence for G.R.O.W to build gardens at Grantham Hospital, and ensure their work could begin. By August, as my photos reveal, despite the searing heat followed by torrential rain, the hard landscaping was in place. This month’s cooler temperatures should allow appropriate planting. Considering the miracles Nikki has worked on her new Beckingham home turf in less than three years, watch this space. Naturally Sharon Hurrell is delighted. Nikki’s biggest ‘buzz’ has been an ecstatic Tracey Pemberton coming towards her, arms outstretched, exclaiming: “I cannot believe that this has happened. This will make so much difference to my patients.”

Remember how those caring folks successfully nursed thousands of WWI and WWII wounded troops? Have we forgotten those landowners who converted great houses with gardens into sanatoriums? Everyone then witnessed how gardens can reduce stress and lift mood for patients and loved ones alike, just as those who continue to support today’s hospice movement. Simply being in a garden gently aids the immune system to function through fragrance, beauty, birdsong, insect-humming and touch. Medical scientists have now clinically proven a phenomenon of nature: greenery and flowers contribute to stress reduction, lower blood pressure and pulse rate, and help recovery from operations. Once a patient can relax, the healing process can resume – from hospital through horticulture to healing and home.

Our surroundings matter. Some years ago, when researching the origins of Wyndham WWI Memorial Park, I was surprised to discover that, in the 1920s, the town was known as ‘Grantham Garden Town’. Let this be the case again! Nikki and Emmy have already surveyed the Outpatients courtyard. G.R.O.W. with the simple mantra ‘Gardens Restore Our Wellbeing’, aim to banish depressing grounds by helping to improve Grantham Hospital. Next they hope to provide opportunities for patients, visitors and staff to socialise, exercise and rehabilitate in a natural, healthy and tranquil environment in all the county’s hospitals.

Reader – you too can make a measurable difference in the lives of others. Go online now – www.growcharity.co.uk – for an artist’s impression of Grantham’s Ward 6 Garden. Then click through to Justgiving.com to send your donation. Tell your families and friends to support this extra-special, local, pro-active gardening charity. Together let’s celebrate and enable these two big-hearted, energetic women to turn their ambitious vision into reality.