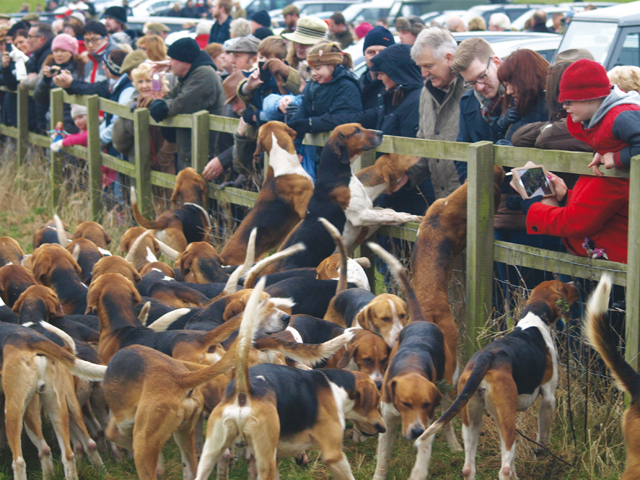 The annual Boxing Day meet of the Brocklesby Hunt took place at the Point-to-Point course on Lord Yarborough’s estate at Brocklesby.

Fifty-eight mounted followers gathered at 11am watched by a large crowd for the traditional Christmas event. Gareth Bow, now in his third season as huntsman of the Brocklesby, paraded hounds along the racecourse assisted by whipper-in Ed Shere who joined the hunt in May. Lord Yarborough led the mounted hunt followers and was accompanied by Lord Worsley and his youngest son, twelve-year-old Edward Pelham riding his grey pony, Jack.

Roberta Jennings from Immingham, a student at the Bishop Burton Equine Centre was riding with the hunt. She said: “I like to continue the festivities on Boxing Day by coming to the meet; I am a regular with the hunt.”

Jean Blakely from Keelby was another mounted follower; she commented: “A lot of people come into the countryside on Boxing Day to enjoy watching the horses and hounds set off. I came because it is important to support this tradition.”

Fourteen-year-old Ellie Hicken from Immingham was making the most of the school holidays and riding her pony whilst her brother Kyle followed on his bike. Emily Wilson (17) from Goxhill was another Brocklesby Pony Club member enjoying riding out with the hunt. Her mum Louise was happy to wait for her to return, whilst Jonathan Hendry from Tetney was following in his car whilst his wife Katy was riding. “It’s lovely to be out in the fresh air enjoying the countryside,” he said.

Amongst the mounted followers were two Point-to-Point jockeys. Tom Broughton is hoping to be in action at Brocklesby with Cian Boy in spring, whilst Midlands area leading Point- to-Point rider Tom Strawson hopes to defend his title when racing in the area resumes. There are two Point-to-Points scheduled for Brocklesby in 2015: the South Wold on Sunday 8th February and the Brocklesby on Sunday 1st March.