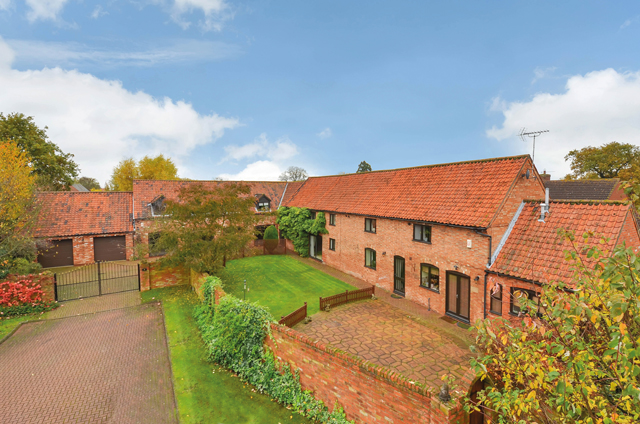 Charm in the countryside

When Lindsey and Paul Whitfield bought The Manor Farm at Brampton, they were driven by location.
At the time, the family lived in a new build property at East Bridgford, near Nottingham, but Paul worked in Hull as the director of Northern Foods whilst their daughter was at boarding school in Derbyshire and their son was at school in Nottingham.

“We decided we would move but we needed a location that would suit all three,” said Lindsey. “We stuck a pin in a map and came up with Lincolnshire so Paul could go across the bridge each day and I could drive our son to the station for school.”

At a visit to the local estate agent, the Grade II listed The Manor Farm in the hamlet of Brampton, nine miles north west of Lincoln, was just one of a series of houses lined up for them to visit. Yet Lindsey in particular was drawn to its sheer scale and large grounds.

“I think I went round the house in a daze as it was so big,” admitted Lindsey. “I took my friend to see it for a second viewing and she said, ‘I wouldn’t want all that brass to clean on the doors’ and I said, ‘what brass?’ I was just so excited that I could do so much with the house and finally garden on a grand scale.

“The house was nicely presented as the previous owners had a very good sense of style and although I could see it had its problems, I loved it.”

The house had been in the same family since the late-1800s. Lindsey explained: “The Dickinsons ran a dairy herd until the late-1970s and owned the whole village including The Manor Farm and Hermitage Farm. Most of the houses were lived in by people who worked on the estate like the gamekeeper and cowman.

“When they sold off the dairy herd, Brampton was in a sorry state with lots of ‘For Sale’ signs outside.”

The family moved into their new home over three days in November but weren’t prepared for the realities of an old house with no central heating. Their only source of heat was three open fires downstairs and a series of oil fired radiators which ‘leaked big patches of oil onto the carpets’ and had ‘knitted electric cables’.

“On our first night, we lit the fire in the TV room and had fish and chips on our laps,” said Lindsey. “My husband and I looked at each other as we weren’t getting any warmer and we realised that all the heat was going straight up the chimney.

“It was a real shock as we had come from a new build but we kept our heads and thought we would have to deal with the big problems first.”

The couple embarked on a five-year project to bring the house up to date. The greatest challenge was creating a home that was sustainable for the twenty-first century whilst being constrained by the fact it had listed status. With this in mind they installed a wind turbine in the medieval ridge and furrow paddock in the five acres of grounds, which runs the heating, lighting and Aga and means that the electricity bill for 2014 was just £16.

The couple planted 500 willows to provide logs for four wood burning stoves and an open fire – the stove in the green sitting room circulates warmth throughout the house backed up by the central heating system which was installed five years after the couple moved in.

“One of our first tasks was to make sure the house was still upright,” said Lindsey. “With three storey Georgian properties, sometimes the roof starts to splay so we had noggins put between the top floor joists which brace the structure. We had a man tapping away up there for three weeks – in fact I forgot he was there one day, locked him in and went out!”

In the three rooms on the top floor, the cracks in the original horsehair plaster were so large you could post a letter through the wall, and ten tonnes of lime ash plaster from the floor was deposited down a bucket shoot into a skip below.

Next the windows, which hadn’t been touched since 1948, were repaired and the ‘black museum of wiring’ and plumbing, both of which had not been upgraded since they were first installed, were replaced. The house then had a damp course and woodworm treatment.

“Most of our ‘mad’ money went into practical work and I don’t think Paul let me buy an aspirational magazine for five years in case I got carried away,” said Lindsey. “But at least there was no pressure to dust while we had the builders in.”

She added: “Having the builders in is a bit like childbirth, you have to forget what having the first one was like before you commit to having them in again!”

Lindsey is particularly proud of her oak kitchen which came from a nineteenth-century French cake shop interior and is inspired by the kitchen of the 1940s cookery writer Elizabeth David. “I found it in an antiques shop in Oswestry and they had found it in Josselin in North West France,” said Lindsey. “The fittings even include a baguette tray.”

Once all the building work was complete, Lindsey had free rein to decorate the house with wallpaper and soft furnishings.

“I have a friend, Mrs Sellers from Grantham, who had made curtains for the great and good of Lincolnshire for most of her life, including Prince Charles’ curtains when he was at Cranwell. She showed me how to make curtains, so I could spend a lot on the fabric and keep costs down; then I taught myself how to wallpaper.”

The final renovation project, which was completed ten years ago, was to convert the old dovecote into a home office for Paul who now works as a director of a division of Capita dealing with research and the environment. The roof was taken down to expose the original beams; the nesting boxes now make a feature wall and a large wood burner keeps the room warm.

Lindsey spends her time working in the house during the winter and the garden during the summer. The gardens, which feature a magnificent copper beech tree planted in 1900, are planted with hundreds of bulbs including Narcissi, crocus lawns, snake’s head fritillaries, primroses and cyclamen and lots of herbaceous planting. A former tennis court was turned into a kitchen garden with raised beds, greenhouses and a hen enclosure, a small orchard and soft fruit cage.

“The gardens are not designed, they have just evolved,” said Lindsey.

Now complete, The Manor Farm is a testament to Paul and Lindsey’s hard work and dedication to their home. However, with their children having flown the nest, the couple have decided the time is right to sell and they have placed The Manor Farm on the market. Once they have found a buyer, they are keen to move to North Yorkshire to be closer to Paul’s work.