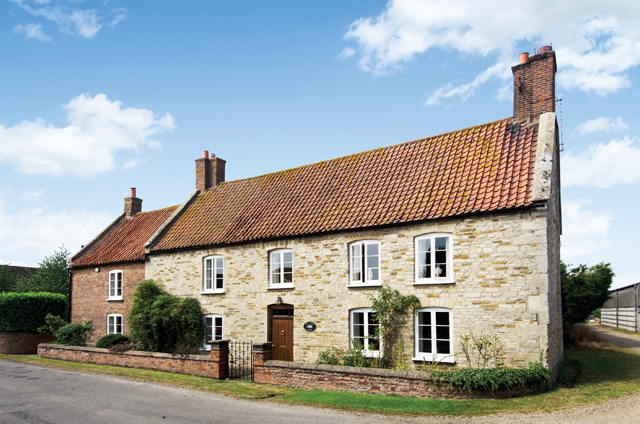 When Steve and Sally Richards moved to Lincolnshire from Cheshire ten years ago, they embarked on an extensive search to find their ideal home.
The new property only had to meet two criteria – it had to have good rail links to London for work (Steve began his role as chief executive of Interflora based in Sleaford in September 2003) and have large reception rooms for entertaining. But after considering more than seventy properties and viewing over thirty in person, they still couldn’t find the right house for them.

“My wife is quite a hard task-master,” joked Steve. “We looked at probably three dozen houses but none were quite right. There were some fantastic old rectories but they were enormous and next to graveyards and a lot were in need of work so we found ourselves casting our net far and wide.”

It was whilst viewing a Georgian house at Marston, near Grantham, that they received a phone call about a property that had only just come onto the estate agent’s books nearby. Mill Farm House on Barkston Road, Marston was a Grade II listed, detached farmhouse built in stone and brick with five bedrooms.

Steve said: “As we walked through the door, it felt like a great place to be. The oldest part of the house with the distinctive brick gable dates from 1604, with the main stone house built in 1650; it had a certain calm atmosphere, lots of rooms that were all good sizes and was in a lovely village location.

“We made an instant decision and made an offer the same day which was quickly accepted.”

The couple and their black Labrador Hamish moved into the house in February 2003 and spent nine months living there before embarking on a series of major extension and improvement works.

“The house is a substantial old stone building, so structurally it was very sound,” said Steve. “It needed a bit of love and detailing and we’ve gone through the house and made some serious improvements to it.

“We were looking for light and built a steel framed conservatory in what was a little courtyard between two extensions in the style of an old garden house. It is always light, west facing and a great place to spend time in the evenings.”

Next they built an extra garden room seven metres long by five metres wide and above it created an en-suite to the master bedroom.

Paul Bee, a carpenter from Wrangle, near Boston, was commissioned to create all the woodwork in the house using hard wood. Steve said: “Paul made twenty-two solid English oak doors copied from an original seventeenth-century internal door in the house, made new architraves, skirting boards, installed wooden floors and architectural cupboards, made the kitchen, built the conservatory and replaced some of the windows for us.

“We feel we are just custodians of the house and because we wanted the work to last for another 400 years, everything was made from solid oak and yellow poplar.”

A local designer was commissioned to redesign the garden, create patios and a parking area. Steve said: “It is meant to be a garden that looks like it hasn’t been designed so it fits in with the style of a seventeenth-century farmhouse. There is lots of planting to attract butterflies and bees.”

It took two years to complete the work and Steve admits it was like living on a building site at times. Now the property is ideal for family living with an entrance hall, dining room with fireplace, kitchen breakfast room with exposed beams, pantry, utility room and downstairs toilet. To the rear of the property is a twenty-five-foot family room with French doors going through to the conservatory – both rooms open onto the garden. A reception or snug with a stone fireplace adjoins the family room and there are two separate staircases to the first floor and another to the top floor.

Outside, a pretty walled garden is mostly laid to lawn with mature trees and borders, an open brick and pantile summerhouse and paved seating area. Electric gates lead to a double garage and a gravel driveway with ample off street parking.

Once the work was complete, the walls were painted in neutral colours and sisal carpets were laid.

Sally, who was initially a human resources manager but has retrained as a psychotherapist working just off London’s Harley Street, designed the stunning interiors to allow the raw stone and woodwork to show through.

Steve said: “The story in the village goes that Cromwell’s men were billeted to the local manor house, got drunk and burnt the place down, and that the stone from the manor house was used to build parts of this house.

“Certainly, some of the Lincoln ironstone is dressed to a very high standard and there are odd shaped pieces of stone which look as if they have come from a grand house rather than a farmhouse.

“When it came to interior design, we didn’t want to make a chintzy pastiche of a country house, a Cath Kidston cliché, but to do something which reflected the calm atmosphere of the place so we used warm clubby leather, fur, velvet and pastel plaids to give it a chic and luxurious feel.”

The couple have many happy memories of their time in the house, in particular family Christmases. Steve said: “The house looks fantastic when Sally’s dressed it for Christmas with wreaths, Christmas trees and lights. We’ve had some great family Christmases and with five bedrooms and large reception rooms, there is space for everyone.”

Sadly, the couple’s dog Hamish, who was well known in the village, died five years ago. Steve said: “Sally would take Hamish on his favourite walk every day to the waterfowl reserve on the edge of the village, which is 100 yards from the house and full of migrating Canada geese, and then over to the nearby village of Hougham. It’s a magical walk and we have only just scattered his ashes there.

“Hamish had a great temperament and we still miss him getting under our feet. He had terrible hips and we got a vet to give him acupuncture once a month and for two weeks afterwards, he was like a puppy again. One of my fondest memories of the house is Hamish lying on the kitchen floor with the vet putting needles in his hip and back.”

Five years ago, Steve left Interflora to develop a portfolio career and now works as a non-executive chairman for two companies in Nottingham and Leicester, and in London. He also sits as a non-executive on the England and UK committees of the Big Lottery Fund, a non-departmental government body which awards around £700 million a year to good causes from funds raised by The National Lottery. It is a role he describes as a “great privilege”.

With both Steve and Sally’s work being more centred around London than ever before and with fewer visits from family and friends, the couple have taken the difficult decision to sell Mill Farm House.

Steve said: “It’s been a heartbreaking decision but we are rattling around in the house now and so we have decided the time is right to sell.”