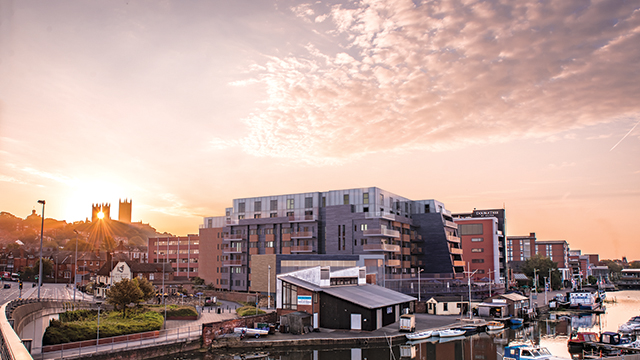 The bustling heart of Lincoln’s Brayford waterfront has witnessed many transformations as its regeneration has melded industrial heritage with contemporary architecture and a vibrant mix of development.
The newest development to take its place on the skyline is One The Brayford on the north shore of the Pool, the conversion of the existing historic Mill House on Brayford Wharf.

The design, by Lincoln based Stem Architects Ltd, has been inspired by the city’s industrial heritage and Tate Modern’s iconic building on London’s Bankside. One of the outstanding features of the scheme will be a striking glass rooftop extension.

One The Brayford is a mixed-use scheme of eighty-nine luxury apartments and three retail units being developed by Lincoln based Jackson & Jackson Developments, in partnership with Richardsons Capital LLP.

Mark King of Stem Architects Ltd said: “One The Brayford is an exciting development that has a great deal of design opportunity.

“The existing building that is being renovated is made of red brick, which is very much part of the Lincoln vernacular and draws back to the industrial heritage of Brayford Pool. We felt it was important to retain that history, so we have worked hard to retain red brick in the design of the scheme.

“While being sympathetic to the surroundings, it was also key for us and our client to have a modern and striking element to the exterior that is in keeping with the high-spec luxury apartments that will be housed inside.

“After looking at a number of options we were impressed with the glass roof extension at Tate Modern in London and wanted to create something similar in Lincoln at One The Brayford. Like the Tate, this scheme is next to water and the glass extension will not only look impressive but will allow floor to ceiling views of the beautiful city of Lincoln.”

Several of the members of the Stem Architects team are graduates of the University of Lincoln and after working with Jackson & Jackson on The Gateway student accommodation on Ruston Way are now engaged on this prestigious development, which overlooks the campus on the southern water edge.

The elevated views of Brayford Pool to the south and over the city and up to the Cathedral and Castle to the north will be outstanding features for occupants. All apartments, which will be delivered in early autumn 2017, will have balconies with sliding facades to enable residents to appreciate these visas.

Director of Jackson & Jackson Developments, Dominik Jackson, said: “As developers we are ambitious in our schemes and want to create the best for the communities we develop in. The glass roof extension is a first for Lincoln, as is the three retail units having the potential for outdoor roof terraces, the latter being a unique addition to the already thriving Brayford Wharf promenade.

“As well as the latest structures being used, we are also incorporating the latest technology that will allow the building to perform efficiently.

Interior design has taken inspiration from classic Art Deco style with a bold, stylish and timeless scheme featuring an elegant geometric print which runs throughout the eighty-nine luxury apartments.

Mr Jackson continued: “One The Brayford is a sleek and contemporary development where we want every element of it to be beautiful. Everything from the branding upwards is intended to turn heads.”

The ‘wow factor’ kicks in as soon as you step into the stunning reception lobby with its bold black and white geometric tiled flooring, walnut veneered and panelled walls with a cast concrete concierge desk. Each apartment reflects this design ethos and boasts a luxe interior fit-out and state-of-the-art technological capability.

All apartments are enabled for tech automation and entertainment systems and penthouse apartments include Google Nest smart controlled heating systems. Fast broadband is of course available, with broadband internet points to living areas, plus telephone points, and TV points to all bedrooms and living areas with satellite points in the sitting room.

Although the development will not be complete until the autumn, more than 45% of the apartments have already been snapped up, reflecting an appetite for luxury appointed city centre living, which hasn’t been available in Lincoln for a decade.

One The Brayford is being marketed by agents Pygott & Crone who have received a consistent flow of enquiries since the scheme was announced, confirming the demand locally.

Tim Downing, director at Pygott & Crone, said: “We are overwhelmed by the amount of serious interest we have received for One The Brayford. It shows that Lincoln is very much a city to live, work and invest in.

“We have seen a wide range of demographics purchasing the apartments, from twenty-somethings right through to those in semi-retirement. We have also had buyers who simply wish to make a sound investment in One The Brayford with the plan to rent out the apartment on completion.

“With its highly sought after location and quality of stylish fixture and fittings, One The Brayford appeals to all and I’d urge anyone interested in this development to act quickly. We anticipate demand to accelerate further.”