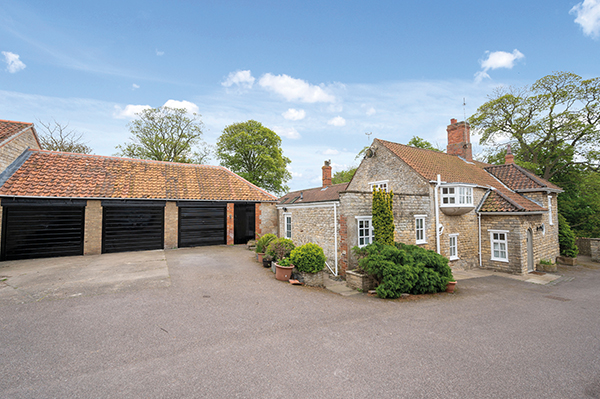 Located nine miles south of Lincoln, this outstanding and rarely available property in the small, historic Cliff village of Boothby Graffoe has been expertly extended to offer generous and flexible accommodation with superb views across the Trent Valley.

Granary House, which dates back to the 19th century, features three/four double bedrooms, including a master bedroom with en suite shower room, separate family bathroom with traditional suite, plus four reception rooms, including 20ft living room with canted bay onto terrace and expansive dining room. There is also a study and two utility rooms.

This well-built, light and airy house is orientated to face south with all the principal rooms on both floors facing south overlooking the garden with a well designed kitchen/breakfast room featuring vaulted ceiling and exposed timbers with Aga range cooker, integrated Bosch oven and gas hob.

“The majority of rooms are dual aspect so the house is flooded with natural light and it has a lovely feeling of space – it’s mainly painted in white and the kitchen and the spectacular sunroom both have vaulted ceilings which enhance this sense,” explains owner Stuart Hancock.

“The walls are very thick and most of the windows are double-glazed, which makes it a really warm and cosy home.

“The three sets of French doors from the living room, kitchen and sunroom all open onto this aspect giving it a wonderful connection with the outdoors and the large, paved terrace, which is a real suntrap, makes it a fabulous place for entertaining, especially in summer.”

Mr Hancock explains that because the property is built on a slight gradient there are differences in levels inside, which provides plenty of character combined with the exposed brick and stone, the chunky structural ceiling beams and the roof timbers in the kitchen.

“The kitchen is the real hub of the home, with the big Aga, and great for informal meals. In summer you can just wander out onto the sunny patio through the French doors – the perfect spot for eating outside. The formal dining room next door is large enough to have a huge table – ideal for big occasions or at Christmas with all the extended family.

“The study is a really good size and faces south and west. It would be a fantastic home office, but has made a great playroom. If wished, it would definitely make a fourth bedroom since there is a shower room with toilet and basin (and the luxury of a sauna) on the ground floor – you could have a study area at one end of the dining room.”

Versatile outside space
Approached by its private entrance with double five bar gates, the tarmac drive in front of the house provides plenty of parking for several vehicles, with the addition of triple garage and adjoining storeroom.

The quiet and private south facing garden features a large terrace with sweeping lawns and an attractive summerhouse.

“The garden is an amazing space with so much room for children to run around and expend a lot of energy! It’s very private and enclosed with mature shrubs and trees along the boundary. The summerhouse is another space where you can go to have complete peace and quiet, and the views over the countryside are fabulous.”

Idyllic location
The attractive and much sought after village of Boothby Graffoe is largely made up of pretty stone dwellings with the mid-19th century church of St Andrew on the outskirts by the Lincoln road, the route of the old Roman road, Ermine Street.

The area also provides some wonderful country walks along the Lincoln Cliff including The Viking Way, a long distance trail running nearly 150 miles between the Humber Bridge in North Lincolnshire and Oakham in Rutland.

Within walking distance of both neighbouring villages Coleby and Navenby, there is a range of amenities and facilities including a Co-op and several family-run shops and businesses such as Odling’s Butchers, which was established in 1920, and Welbourne’s Bakery, which is one of the longest-standing artisanal bakeries in the county.

It can also boast two pubs, The Lion & Royal and The King’s Head, as well as the popular Macy’s Brasserie. Mrs Smith’s Cottage is a charming museum in the village, illustrating a century of rural Lincolnshire life.

“It’s a wonderful location if you yearn for a peaceful country lifestyle yet need to be close to towns and cities, and Navenby is only a mile away with so much to offer including the excellent primary school. You can walk there along the Viking Way, do a bit of shopping, have a coffee or some lunch at a pub or café, and walk back.”