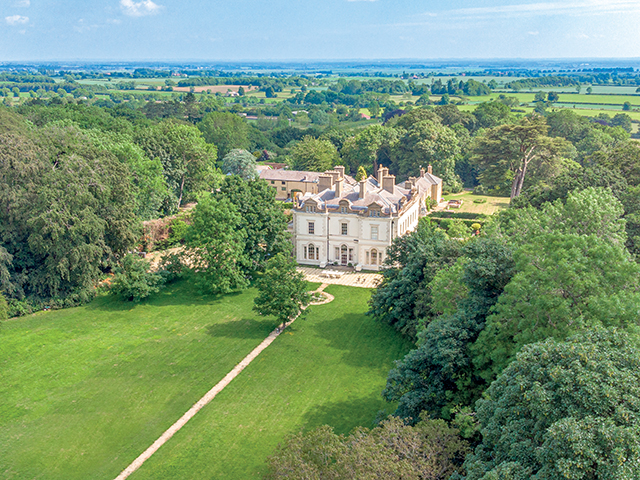 Longhills Hall offers a rare chance to experience elegant country living in a stylish property which combines period charm and a wealth of character.

Dating back to the mid-17th century, Longhills Hall is an impressive Grade II listed country mansion built in the Palladian style, which has been beautifully restored to include an abundance of original features providing its own unique character.

Not surprisingly, this magnificent 10-bedroom house, which stands in grounds of four acres of wraparound parkland grounds, also has an interesting history and includes cellars which indicate that it originally occupied the site of a former residence from the Elizabethan era.

In 1836 alterations to the house were made by George Basevi, a pupil of Sir John Soane, one of the foremost architects of the Regency era and a Professor of Architecture at the Royal Academy.

For more than 200 years it was owned by the Curtois family, followed by the Abel Smiths, renowned bankers whose name still sits above the NatWest bank in Lincoln.

During World War II, the 1st Airborne Division, which took part in the invasion at Arnhem, was billeted to Branston and many of the soldiers occupied the hall, which features two commemorative plaques near the entrance.

Since the turn of the millennium, Longhills Hall has undergone a complete restoration and been returned to its former glory as an exceptionally elegant and sophisticated stately home.

Among the many treasured original features which have been retained is the iconic Georgian porte cochère with Tuscan Doric columns at the north entrance and projected bays with three Venetian windows on the front façade to the west.

Also on the ground floor is the spacious kitchen breakfast room, with the cellar running under the majority of the hall’s footprint sectioned into four vaulted rooms, comprising storage, wine cellar, wood store and workshop with power and lighting.

Gorgeous grounds and views
This majestic house is approached from the Sleaford to Lincoln road down a long, sweeping, tarmac drive through mature trees to the main, impressive entrance of the hall on the north elevation where a spacious gravel drive offers an abundance of parking.

The west-facing front with its superb trio of Venetian windows and the south-facing side elevation features a large, paved terrace with wonderful views across the parkland-style grounds with expansive lawns, magnificent beech trees and enchanting woodland, adjoining paddocks and open countryside.

In winter, the snowdrops and aconites are a beautiful sight, followed by splashes of colour in spring and summer from flowering shrubs and plants.

Ideal rural location
Located just a mile outside the pretty village of Branston, Longhills Hall is ideally situated being just a 10-minute drive from Lincoln, with rail connections directly to London King’s Cross and a good road network nearby.

The A15 northwards provides easy access to the M180 motorway network and Humberside Airport, and the house is also within an easy drive of the A1 at Markham Moor along the A57 westwards, and the A1 at Newark, via the A46.

The village is well served for education too, with excellent infant and junior schools, rated Outstanding and Good by Ofsted respectively, as well as an Outstanding state secondary school, Branston Community Academy. The Lincoln Minster (Prep and Senior) are highly regarded independent schools in the centre of Lincoln, only about a 10-minute drive from the property.

Branston also boasts a medical centre, Co-op supermarket, post office, takeaways and the Waggon & Horses pub which serves food, as well as a busy village hall, recreation ground, tennis club and fitness centre with swimming pool. The Church of All Saints dates back to the 11th century and is open for worship.