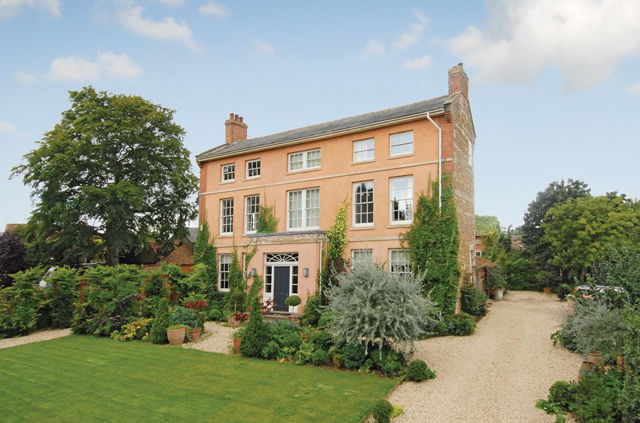 For its owner, Tiffany Giudicelli, knows a thing or two about interiors having once been a stylist for Elle Decoration and Gardens Illustrated magazines. Since she and her husband, Laurent, bought their classic Georgian house five years ago, Tiffany has used all her experience to turn it into the stunning and stylish family home it is today.

The house, with its white painted walls, stripped wood floors, sash windows, deep skirting boards and original fireplaces, is used as a photographic backdrop for the couple’s silk flower mail order company, Bloom, and was recently chosen as the location for wallpaper and fabric company Sanderson’s new brochure.

Tiffany admits the house itself holds the secret to its inspirational good looks. She said: “It’s very simple – the house has good bones with nice architraves, good windows and skirting boards and classical proportions with a huge, luxurious hallway on all floors and the same sized rooms throughout, making it very liveable.

“Although it is east facing, it is incredibly light because the windows are very large and all the rooms, apart from our bedroom, have windows on both sides. Even the hallway is like a light well which is unusual for an old house.”

The couple met in London in 1991 and set up Bloom eleven years ago after spotting a niche in the market. Tiffany said: “At the magazines, we always used flowers in shoots and people were thrilled when I wrapped them up afterwards and gave them as gifts. I thought flowers would be a nice life. At the time silk flowers were a bit naff so we decided to do them in a not-naff way.”

The couple, who have lived in London, Rome and Los Angeles, decided to make their home in a huge old mill in South Wales before relocating to Lincolnshire in 2004, with their son Etienne (now 8), to be closer to Tiffany’s mother. At the time Tiffany was pregnant with their second son, Remy (now 6).

At first they rented a house over the border in Leicestershire’s Vale of Belvoir but Tiffany always preferred rural Lincolnshire because it reminded her of the Welsh countryside she had left behind.

They had viewed the Old Rectory and fallen in love with it six months before making an offer on it. Tiffany said: “The wine cellar sold it to Laurent and I loved it because it looks like a doll’s house. Our builder also said that even though it needed some work, it was solidly built and sound as a pound.

“The decoration wasn’t to my taste but it was immaculate inside and very workable. It had all the original doors and cornicing and then another layer on top, so we just simplified it and put it back to what it was.”

Whilst Tiffany and Laurent are no strangers to renovating property (they lived in the old mill whilst it was being renovated), having a new baby made them determined to complete all the necessary building work before moving into their new home.

They set about turning nine bedrooms into six by converting one room into a bathroom and knocking two rooms into one. Then every room, except the kitchen, was plastered, they replaced all the old sash windows with modern double glazed sash replicas, re-wired and re-plumbed throughout and hid cables and TV aerials in the walls.

When it came to decoration, Tiffany painted the walls white, added simple curtains and filled the rooms with what she calls ‘tatty’ furniture.

She said: “The house is impressive in its own right and we’ve just added simple curtains and a lot of e-bay furniture.

“This was always going to be our home and had to stand up to our children. They’ve loved climbing through the windows, sliding down the banisters and riding mattresses and cushions down the stairs, but the house is robust and stands up to it well.”

She added: “One of the best things we did was replace all the sash windows with modern double glazed replicas and have the whole house insulated. We lived in an old rented house before and it cost us thousands to keep it warm, and I didn’t want to waste money in that way again.

“The new windows and insulation really do keep the house warm. Our boiler broke down one Christmas when Laurent’s family had come to stay and we managed to keep the entire house cosy for five days just by lighting fires and candles in the rooms.”

Living in such a prominent village house meant that lots of local people had stories to tell about the place, prompting Tiffany to visit Lincolnshire Archives to discover more about its history. She found that the house was very early 19th century and the frontage was added in around 1740 in the Queen Anne period, but that there had been rectors living on the site since the 15th century.

She added: “It was originally a two-storey building until the beginning of the 20th century when the new rector had lots of children and had to add another floor.”

By around the 1960s or ‘70s, the rectory was sold by the church and then passed through private hands until it was purchased by Tiffany and Laurent.

The couple have since purchased more grounds and the property now stands in an acre-and-a-half of walled gardens with its own summerhouse.

Tiffany said: “The garden has some very ancient apple trees and is completely private. We re-landscaped a lot of it and made it quite formal and classical to suit the house.”

Living next to the church has put the family at the heart of their local community. She added: “We have a close relationship with the church – we see people getting married, funerals, Christmas celebrations and we always hear the choir singing on a Sunday. We don’t even have a clock in the house because we just use the one on the church!”

Now after making the Old Rectory their home for the last five years, the family have decided the time is right to move on. They intend to relocate to the South of France to live nearer to Laurent’s family.

Tiffany added: “I will be sad to leave the house, and in particular the garden because I put my heart and soul into it, but you’ve got to look forward and now is the right time to move on.”