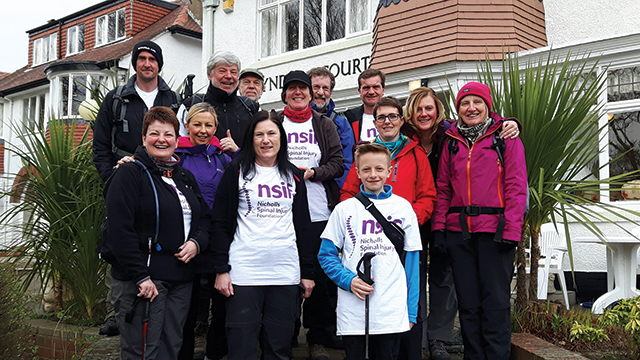 Despite their charitable status, every year staff and residents at LACE Housing raise much-needed funds in aid of a very worthy cause, and 2016 is no exception.
At their Annual Awards and Presentation Evening, held at the Bentley Hotel near Lincoln in 2015, they were joined by Claire Lomas, Patron of the Nicholls Spinal Injury Foundation. During the event Claire provided an insight into her life following a horse riding accident in 2007 which led to her becoming paraplegic. Since then Claire has raised over half a million pounds in the hope of finding a cure for paralysis.

“Having heard Claire’s inspiring story, it was unanimously agreed to recognise NSIF as our chosen charity for this year,” said Nick Chambers, LACE Housing chief executive, who along with nine others spent Easter undertaking a sponsored trek along the 110-mile Cleveland Way. “This is the third sponsored walk we have undertaken in the past six years, the previous one being Wainright’s 220-mile Coast to Coast walk, from St Bees to Robin Hoods Bay.”

This year’s team included staff and friends associated with LACE Housing and the Sir Robert Pattinson Academy, which the Association provides support. Described as ‘strenuous’, the trek was from Helmsley to Filey via Sutton Bank, the 1,000ft Hambleton Hills, the 1,309ft Hambledon End, Cleveland Hills, North Yorkshire Moors, Summit of Urra Moor and Round Hill, and along the coastal path from Saltburn all the way down to Filey Brigg. Thanks to storm Katie, weather included high winds, hailstones, thunder, lightning, rain and sun.

The youngest member of the team was Elliot Chambers, aged 11, a student at the William Farr Academy.

“Together we have raised over £2,500 which is a great start,” said Nick. Further events are planned during the year. For further information you can visit the LACE Housing website www.lacehousing.org or to make a donation www.justgiving.com/lacehousingassociation.