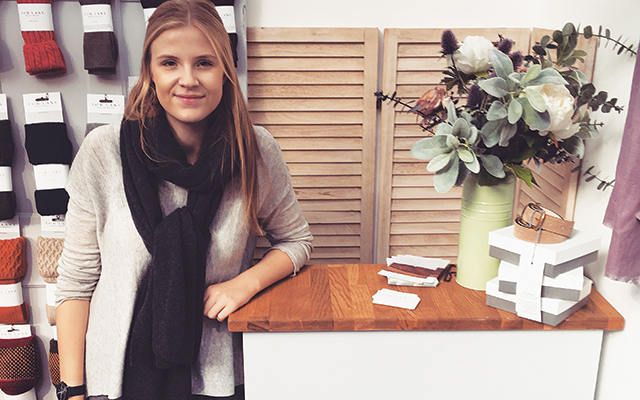 Clothing which epitomises quality and craftsmanship

Inspired by her love of the outdoors and sense of adventure, Jayne Ireland has launched her own fashion label right here in Lincolnshire.
Everything produced under her Tom Lane brand is designed and made in Britain to exacting standards, using traditional manufacturing and craftsmanship techniques. This is something Jayne is fiercely proud of and which unites with her ethos to create timeless products with durability and high performance.

“I set out to create a lifestyle brand that people want to become a part of,” says Jayne, who lives on her family’s farm in North Rauceby, near Sleaford.

“We are not part of the throw away fashion generation – we have a respect for quality and appreciate craftsmanship. Where shall we make our products was never a question. They were always going to be made in Britain; it was just about finding a way.

“It has been a challenge to achieve this status – it could be said that highly-skilled craftsmen and women have become an endangered species. As craft-based businesses decline, those that are left are often smaller and family-run but we were lucky enough to find a small workshop in Wales with the same ethos as Tom Lane and they have manufactured our first collection of shirts.”

Jayne, who grew up on the farm where her father, uncle and grandfather grow wheat, barley, sugar beet and oilseed rape, has always been involved in the family business but decided to pursue her love of art and clothes when it came to her own career.

“I enjoyed all the arts, but it was fashion that I always wanted to go into,” she recalls.

“That’s what I’ve always enjoyed. I love clothes – I used to watch the catwalk shows and want to be the one producing them.”

Jayne completed a three-year fashion honours degree at Falmouth University, in Cornwall, which included an internship during her second year with London designer Sophie Hulme, where she gained a real insight into the industry. During her final year she produced a collection of eight outfits inspired by her own country heritage including a trench coat and tailored trousers and completed a business plan for her own label.

But after her studies Jayne went back to her rural roots working at the grain merchants where she’d spent her previous summer holidays, while trying to find a suitable position in London, until a meeting with a former tutor inspired her to strike out on her own.

“One of my tutors remembered my business plan and said it was a strong piece of work and that I ought to just go for it, so that’s when I decided to launch my own label,” she explains.

“I went and did a short course at the London College of Fashion focusing on starting your own brand. I knew that I would have to give up having an income for a while so this seemed like the best time to go for it.”

Jayne officially launched Tom Lane – named after the lane which runs through her village – last July, but started working on the brand full-time in December 2014.

“I started off with shirts and took a couple of months to do all the pattern cutting and samples and that’s when I decided I wanted to make everything here in Britain,” she says. “That’s a very important part of Tom Lane; there are lots of different manufacturers here in Britain and I found a really good workshop across in Wales. I went to visit and they completely understood what I wanted to achieve with the shirts.”

Socks were the next item added to the label; Jayne designs and sells a variety of boot, shooting and bed socks which are manufactured just over the county border in Leicestershire. Several of her lines are made from alpaca wool, which keeps feet warm and is incredibly hard wearing.

“A lot of people already know about them, or want to try them as alpaca is very warm, but also breathable. They’re not just a winter sock, but can be worn in the summer too. They can be put in the washing machine, although you don’t have to wash them every day,” she says.

“Unlike cashmere they last a long time – we like our stuff to last here at Tom Lane.”

Another new line also proving popular is socks made from yak wool, which are also warm, breathable, soft and strong.

“Dad is out on his feet all day so he’s been testing them out,” says Jayne. “It’s really nice to be able to offer something different. Yak isn’t something that’s readily available in this country but we’ve been working with a knitwear maker who has been out to China where the nomads are self-sufficient thanks to the yak, using it for meat and transport.

“The down was just blowing away in the wind so he brought some back and made it into yarn. It’s the perfect winter sock – warm, soft, resistant to odour and responsibly sourced.”

As well as being available online, Tom Lane products are sold in a number of independent retailers in Cornwall, London and here in Lincolnshire, while Jayne has also been busy showcasing her collections at country and festive fairs.

“The shows have been great for getting the Tom Lane name out there. They’re also good for gauging customer feedback and what people would like to see next – so far we’ve had requests for fingerless gloves and leg warmers, so I’m going to look at taking the knitwear further and maybe doing a small collection.

“It’s very hard doing it all on my own. At the start I thought I would spend a lot of time designing, but that’s not realistic as there’s paperwork and orders to take care of.

“My family has been very supportive helping me, but I have to make time to sit down and design.

“It’s just been amazing – if I look back to where I was last year, to what’s happening now, it’s wonderful how far it has all come in just a year. There are exciting times ahead and I’m looking forward to building the brand and taking it forward.”