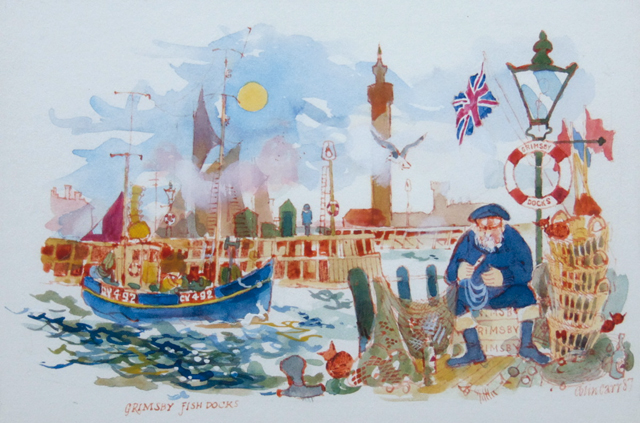 Lincolnshire has never been lacking in talented traditional fine artists and the work of Colin Carr, perhaps more than that of any other local artist, has adorned the walls of many homes across the country for years.
Colin Carr had an enduring love for the county of big skies and his interpretations of market places throughout the Wolds are held in high regard, even by other well respected Lincolnshire artists.

His depictions of a long since departed way of life in towns and villages throughout Lincolnshire were a staple part of his work, as well as the faded seaside glamour of Edwardian coastal resorts and images of Grimsby trawlers.

A student of Grimsby Art School, Carr found his feet whilst working on the docks, painting vignettes for colleagues and friends before a newly founded magazine, Lincolnshire Life appeared in 1961 with Carr becoming art editor in 1965.

When the sister publication This England arrived in 1968, the artist decided to maintain his base in Lincolnshire rather than move to the Cotswolds, where the head office was based.

I was personally invited by This England magazine in 2012 to view the archive of Carr’s pictures held in Cheltenham and subsequently auctioned over 100 of his most unique and individual paintings including Laura: Lark Rise to Candleford. This picture featured in Golding Young & Mawer’s Fine Art sale at The Lincoln Auction Rooms on 22nd April, alongside four of Carr’s more familiar, whimsical images.

Following Colin Carr’s death in 2002, the prices for his work have been steadily rising with the more unique pieces and large format Grimsby townscapes leading the way.