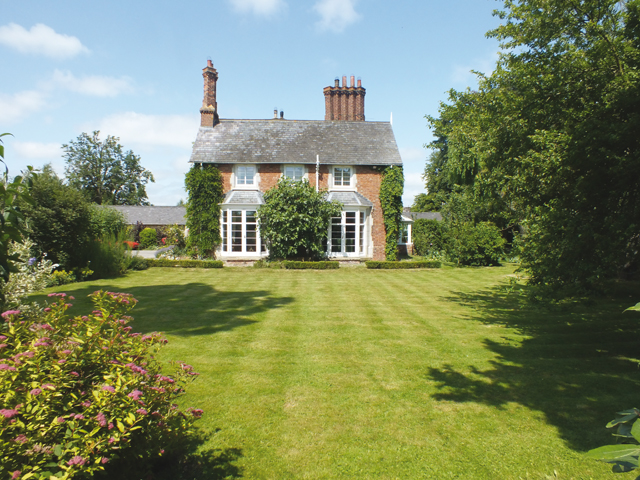 Colourful life in a Victorian rectory

On Claudia Booth’s first visit to The Old Vicarage in Thornton, near Horncastle, she was particularly drawn to the pretty patterned tiles on the hallway floor.
The geometric and encaustic floor tiles added a feeling of warmth to the Victorian building, which had been designed by the architect Mr Fowler between 1845 and 1870 – possibly at the same time as the refurbishment of the church next door. Fowler also designed the vicarage of St Michael’s Church in Louth.

At the time, Claudia and her husband Mike were living in a modern property eight miles away in Tetford where their business Aura-Soma – which gives clients a better understanding of themselves through colour therapy – was based. They had moved to Lincolnshire from Dorset ten years previously, after meeting Vicky Wall and Margaret Cockbain at a Mind, Body and Spirit event in Malvern.

Claudia, a former fashion designer and teacher, was very interested in colour therapy at the time and Mike, who was an art teacher and healer, ran meditation classes. (Claudia and Mike had met a few years previously and both had independently studied comparative religion and had a strong interest in psychology and personal development.) At the event, Vicky and Margaret were selling dual coloured bottles of massage oil and giving consultations based on colour. Claudia immediately asked for a reading.

She said: “That morning I had suggested to friends that I would like to combine flower remedies like Dr Bach’s with crystal energies in water in coloured glass bottles.

“When I explored the exhibition thirty minutes later, it was clear that Vicky had done it far more beautifully than I had imagined. She included, as we do still, natural colours, plant extracts and essential oils and water energised by crystals. The crystal and plant choices are made according to their colour and today we also include crystal essences imported from Switzerland.”

Claudia and Mike invited Vicky and Margaret to their home in Dorset to teach a six-day course and then helped them find and set up a residential training centre at Tetford, near Horncastle known as Dev Aura (meaning ‘House of Light’) in 1986, where they teach colour counselling. From small beginnings, the business grew into a worldwide concern with distributors as far away as Germany, Japan, Brazil and Peru.

The company makes bottles of coloured massage oils with water and plant minerals in the base and essential oils in the top to give 112 different colour combinations. Clients are asked to choose four bottles to which they are most called; the sequence of the colours tells a story and the Aura-Soma consultants help the clients with the ultimate intention of helping with their personal growth and self-acceptance.

When Vicky passed away in 1991, the business was passed to Mike, Claudia and Margaret. Margaret died in her native Australia in 1998.

At this time Mike and Claudia were keen to find a home with more space for their large family. The Old Vicarage is ‘very beautiful’ and was ideal – the couple had five children: Aaron, Jessica, Fraser, Daisy and Lilleth.

Despite the fact that it was empty – it had been bought by a local farmer two years previously but he had never lived in it – the property had obviously been well looked after and needed little work.

The couple bought the house in November 1998 and moved in August the following year, after having a new kitchen installed and replacing some interior doors and two fireplaces which were missing.

The house, which stands in five acres of grounds, has five bedrooms, three formal reception rooms, a library, three bath/shower rooms, a kitchen, laundry room, office, playroom and wine cellar. The couple added two hardwood conservatories to the property over the years – one off the back sitting room and another off the kitchen.

As it is not listed, the house blends many original period features with modern fitments such as the recently installed hardwood double-glazed windows with original stone mullion windows, twisted chimneys, solid oak and pine interior doors, original Victorian fireplaces and stone and mosaic floor tiles.

Their oldest son Aaron sustained a head injury when he was hit by a car in 1988, so with his needs in mind the couple converted and extended an old coach house with stables into a ground floor flat with carer’s accommodation above. Sadly Aaron passed away before the conversion was completed. The three one and two bed luxury apartments have recently been granted planning permission for use as holiday accommodation.

Claudia has particularly enjoyed designing the five acres of private gardens which surround the house. The couple divided the garden into rooms using hedging, created a pond in the front garden and added a Flowform to a pond at the back.

Claudia explained: “If you get water to skim out on a large flat surface, the rays of the sun purify it. The water moves down through the Flowform and swirls in a figure of eight to create very beautiful, rhythmic motions which energises, purifies and cleanses the water.”

The couple have enjoyed many happy times in The Old Vicarage over the last fourteen years. “Christmas is always lovely in the house and we enjoy having barbecues outside in the summer months,” Claudia said. “Lilleth and her husband Guy got married last September in the local church which is just a fence away through a tiny gate. We walked across to the church and had a reception in a marquee in the back garden.”

Mike is still very involved in Aura-Soma and travels the world to teach its principles. Meanwhile at home the business continues to grow – the couple acquired Shire Farm at Hagworthingham, which they have converted and maintain to organic and biodynamic recognised standards. Mike and Guy, who has a degree in viticulture and oenology (growing vines and making wine), planted six south facing acres at the farm with 7,000 organic Seyval Blanc vines which will be grown biodynamically to make into sparkling wine. And they are in the process of applying for a distiller’s licence to produce gin from the grain produced on the farm.

Claudia is also exploring uses for the wool produced by the farm’s herd of large Zwartbles sheep, and the biodynamic spelt grown on the farm is being sold to a growing number of artisan bakers and highly reputed restaurants across the country.

Now, however, with their children having left home, the couple feel the house is too large for them and have decided to place it on the market in order to downsize.