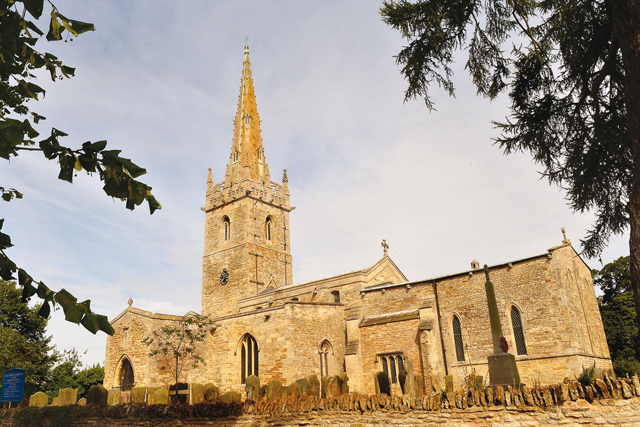 The low-lying area surrounding Aubourn village, nestling in the valley formed by the River Witham southwest of Lincoln wending eastwards to the Wash, is a prime candidate for flooding.
Up until the Second World War, the whole area was allowed to flood during the winter if the river rose too high, not a very promising site for a garden. Yet it is thought there has been a house at the eastern end of the village since the Middle Ages, probably originally wooden, surrounded by a moat.

The name Aubourn derives from ‘Eau born’ or the ‘Stream where the Alders grow’. In 1086 the Domesday Book mentioned a fishery valued at 1,000 eels. Today, two small ponds are perhaps remnants of the original eel stews/fishponds. The wooden church, St Peter’s, paid a tithe of eels to Belvoir Priory. By the thirteenth century, the church was rebuilt in wood and stone, and served the local population until 1862 when nave, porch and tower were demolished, leaving a small chapel. The miniature church (restored 1930) looks like a model from Gulliver’s Lilliput.

The interior features a 1630 fireplace with coat of arms, Meres impaling Nevile, and an intricately carved staircase with striking, grotesque decoration, entwined leathery foliage and serpents, in a Gothic-Viking tradition. From 1709, the Nevile family lived primarily at Wellingore, but returned to reside at Aubourn after the Second World War. In the meantime, for almost two hundred years, Aubourn was leased to the Lamb family. An 1848 survey in the time of tenant William Lamb, an influential early convert to Wesleyan Methodism, shows over three acres of ‘parkland‘ and gardens in front of the house and nearly one-and-a-half acres of orchard. By an 1874 survey, his son, also William Lamb, had undertaken the straightening of the River Witham to make it navigable, with a canal branching off into the hall cartilage, perhaps to bring coal to the house. According to a nineteenth century drawing, there were once two doors in the front elevation of the house. The architect C H Wray, who, at the beginning of the twentieth century built the stables and carriage house, is thought to be responsible for moving the classical Jacobean front door to its present, unusual, asymmetrical position. A 1914 postcard shows a great Cedar of Lebanon obscuring the house. By 1930 this had been felled and replaced by shrubs and a sundial in a circular central bed.

The Neviles returned to Aubourn in 1946. A hedged area north west near the river, originally the kitchen garden, was converted into a rose garden in the 1970s by the present owner Christopher Nevile’s parents, Sir Henry Nevile MP (High Sheriff 1963; Lord Lieutenant 1975) and Lady Jean Nevile. They became avid gardeners, enhancing the restful ambiance of lawns and mature trees by developing shrub borders westwards and creating a dell garden where the land sloped down behind the house, round to stone steps (originally from Ossington Hall, Nottinghamshire) leading to a rose garden where once was a hedged kitchen garden. In 1985 Lady Jean, now a much-admired, knowledgeable planstwoman, made the ‘swimming pool’ garden. On one side a brick pergola shades a walk with intertwining roses, honeysuckle and clematis, on the other, an amazing herbaceous border, basking in full sun, still lovingly tended by Lady Jean. A charming, iron rail fence carved with owls and butterflies was made by Lee at Long Bennington. Beyond a nearby gate (from Moreton Hall), the Neviles excavated an L-shaped lake, mirroring the house, and fed by field–drains, to entice visitors into a circuit walk through the woods. In a clearing, there is now an eleven-ring turf maze modelled from Chartres Cathedral.

Arriving just after the Millennium with their young family, Christopher and Annabelle Nevile were understandably somewhat daunted about the gardens, but soon engaged in their care. Two years ago, Andrew Nidd (who already knew the garden because his in-laws live in the area) took on the mantle of Head Gardener. His first, indeed imperative, project was to tackle the rose garden which was plagued by Phytophthora, a soil-borne water mould that causes die-back. Annabelle’s visit to Cornwall’s ‘Lost Gardens of Heligan’ inspired the re-design: a snaking, child-friendly walk threads through giant prairie grasses. Thanks to Andrew’s knowledgeable expertise dovetailing with Annabelle’s experimental ideas, the area has also been planted up with interesting perennial species that are equally resistant to the pathogen. Meanwhile the south border was transformed into the Peony Garden, Annabelle’s favourite flower. Plans for a purple border are in the pipeline.

Of course Aubourn without roses was inconceivable. Even the Nevile’s new baby daughter was christened Rose! Annabelle told me: “Aubourn has such a particular spirit that when the old Rose Garden died I could not bear the thought of continuing without it.” The solution was to move the drive back to its original 1905 position to free up a considerable area directly in front of the house for a garden of display, rather than discovery. “I can now look out over roses from our bedroom window.” She continued, “I was very keen to choose bush roses with a limited and harmonious palette of colours incorporating old roses and new, all for their scent.” She spent endless hours, poring over catalogues and books, cross-referencing the choices, some sourced from David Austin, some from Pam Tatum at Harpswell, including ‘Gertrude Jekyll’, ‘Bonika’, ‘Tuscany Superb’, ‘Ispahan’, ‘Saint Cecilia’, in amongst ‘Rhapsody in Blue’ and the unusual, shaggy, carnation-like ‘Fimbriata’. The inner circle of beds was to be pale, blush pink, the outer blending artfully darker from blush pink through to purple.

Centreing the rose garden proved challenging; the traditional design, following that of the original has been aligned on the house and not the asymmetrical front door: four quadrants, each divided into three, but with an extra grass path to be able to get close to smell the roses, all enclosed by a beech hedge, making a garden room to provide protection and capture sunlight. Annabelle suggested bringing across the hub of the old garden, and placing the copper cauldron (one of few garden ornaments that I truly lust after!) on top of the old millwheel (from Aubourn Mill) that had been central to the turning circle. The Pièce de la Résistance, this makes the perfect foil for billowing roses.

Ben Hogan, the celebrated golfer, advised: “As you walk down the fairway of life you must smell the roses, for you only get to play one round.” So why not take time out to visit Aubourn Hall Gardens, reinvigorated, to enjoy a sensational, heavenly fragrant rose garden, with the copper centre stage, looking as if it has always been there.