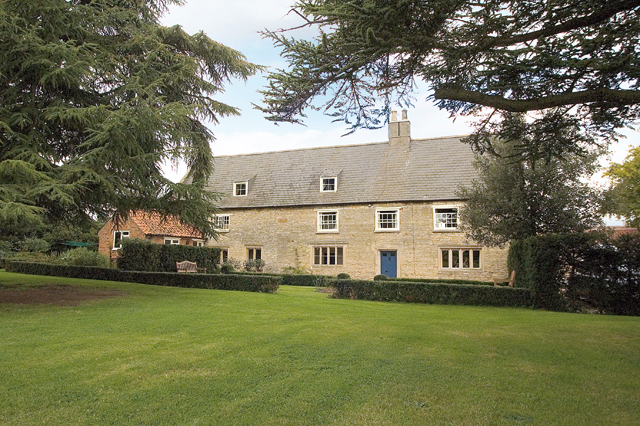 Contemporary living in a Lincolnshire longhouse

When Susannah Joy and her husband Andy walked around the garden at The Cottage at Osbournby, they fell in love with the place.
Susannah, in particular, had always wanted to live in a house with a cedar tree in the garden like the grand country houses, and this garden had two!

“There was so much space, with an acre and a half compared to the postage stamp we had in London,” she recalled. “Then my husband, who is six foot five inches tall, stepped into the kitchen and banged his head on a beam and we almost didn’t buy the house!”

Thankfully, despite the low kitchen ceiling, Susannah and Andy both agreed that The Cottage was the perfect place for them.

The couple had met when Susannah worked for a financial advertising agency and Andy, who worked for an American investment bank, was her client. Andy, who is now a director of an insurance company, then moved to Milan in Italy and the couple had a romantic courtship before Andy proposed. After their wedding in 1996, the couple honeymooned in Italy as well.

But Susannah, who comes from the West Country, was getting tired of living in London. They moved to Saffron Walden in Essex, which was within commuting distance of work, but eventually got priced out.

Susannah said: “There was talk of putting another runway in Stansted and the village was becoming a cut through. I was talking to one of my bosses who lived in Lincolnshire and he said we would probably get more for our money in the county.”

Susannah bought a copy of Country Life and spotted a half-page advert for The Cottage at Osbournby, near Sleaford. The Grade II listed detached stone residence was set at the centre of the village within grounds of 1.4 acres. Better still, the town of Grantham, just eight miles away, offered a fast rail link into London in just over an hour.

Although they fell in love with the house on the viewing day, Susannah admits it was in a poor state of repair. “The kitchen units were free-standing and the sink was on bricks,” she said. “There was a sort-of bathroom and larder downstairs that was the old cow shed with an original floor, and the stairs had been bought at auction and just nailed in place.

“It needed rewiring and only had three bedrooms, but because we were both working in London at the time, we decided it was going to be a long-term renovation project.”

Despite its condition, Susannah and Andy put in an offer which was accepted and they moved into the property in 2000.

Susannah threw herself into county life, taking up rowing at Boston Rowing Club. Although she had been commuting into London for eighteen months, a rowing accident in which she capsized the boat and suffered a prolapsed disc forced her to give up work.

Soon after the couple decided to buy their first dog together, Barney, a Rhodesian Ridgeback (now 12), Susannah found out she was pregnant.

“We were going to take ten years to do the house up gradually and it was going to be a labour of love,” said Susannah. “But being pregnant forced our hand a bit. We lowered the floor in the kitchen and put in new units and turned the downstairs bathroom and larder into a snug, then we installed a new staircase and a new bathroom upstairs where originally there had just been a shower room, and carpeted throughout.”

At that point the house consisted of a kitchen, snug, dining room and sitting room downstairs and three bedrooms and a bathroom upstairs.

Alexander (now 11) was born in December 2003 and two years later in June 2005, the couple had a second child, Emma (now 9). With two children, the three-bedroomed house was adequate, especially as they used the attics, which run the entire length of the house, as storage.

But in 2007, when they discovered Susannah was pregnant for a third time, the couple realised they didn’t have enough bedrooms for their growing family. At that point, they made the decision to convert the attic into three bedrooms using local builders.

With advice from a conservation officer from the council, the house was structurally checked and made sound and then a new roof was installed and the latest thin insulation used to ensure they could keep the roof height.

It took six months to complete the work and now there are three bedrooms in the attic, one with an en-suite shower room and walk-in cupboard for Alexander, and a bedroom each for the two girls, who share a bathroom.

“It was a massive job and I would never want to do it again,” said Susannah, who gave birth to her third child, Georgie (now 8) at home in 2008. “But the builders kept the dust out of the rest of the house by only making the second staircase at the end of the project.”

This staircase features an original wattle and daub wall, which conservation officers were keen to preserve.

Built in 1625, the Grade II listed property is an example of a Lincolnshire longhouse and is believed to have been a Yeoman’s residence. It is understood that land to the rear of the house belonged to Lady Exeter and the house may stand on part of the Burghley Estate.

Susannah said: “The local heritage centre has a feature on the house because it is one of the oldest in the village and there are photographs of a lay preacher who used to give sermons in the grounds.”

The family have enjoyed their time in the village immensely with the children going to the local nursery when they were small, and each one being christened in St Peter and St Paul Church opposite their home. Alexander will soon be attending one of the local grammar schools, as he has just passed his 11-plus exam.

Last year Susannah’s mum Audrey married her husband Peter Hall in the same church and there was a wedding reception for sixty guests in a marquee in the garden. The day coincided with Susannah’s birthday, so in the evening 100 guests partied the night away.

The family has gathered a menagerie of animals over the years with a Rhodesian Ridgeback puppy called Red as well as Barney, two cats called Abi and Fitch, two ponies – Monty and Frank – and a chicken called Mrs Tittle Tattle.

Despite their love of The Cottage, Susannah and Andy, with the blessing of their children, have decided the time is right to sell their home. Susannah has recently taken up horse riding again after thirty years out of the saddle and is keen to move to a house with more land and paddocks in the grounds. They have already found a property five miles away and had their offer accepted.

“My mother-in-law says this is a house that hugs you as soon as you walk in,” said Susannah. “I will be sad to leave it, as I expected to stay here forever, but now is the right time for us to move on.”

The Cottage at High Street, Osbournby, near Sleaford is on the market with Savills, Lincoln, with a guide price of £695,000. For more information contact the estate agents on (01522) 508900.