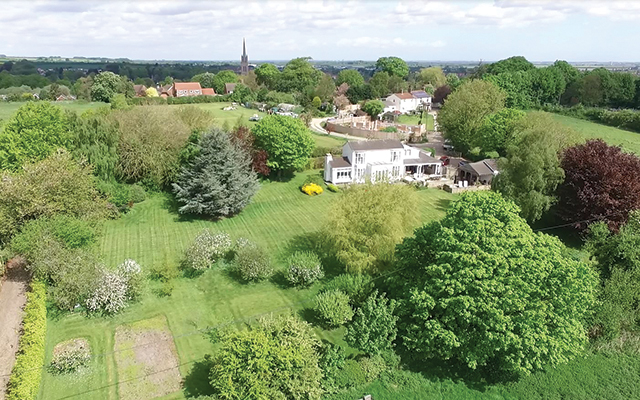 On the market with: Masons, Louth

Julie Sutton and her husband Peter tell Sarah Winstanley that when they were last house hunting, they were surprised to find their new home in a secret, tucked away location.
The couple, who have five now grown-up children between them, were keen to have more space and find a property that would suit their teenage children as well.

Julie, who previously owned the Forbes store in Louth and bought bra shop Pretty Woman in Seaview Street, Cleethorpes five years ago, said: “Even though I have lived in Louth all my life, I didn’t know Julian Bower House existed because it is very private, down an unadopted road but within walking distance of the town centre.

“We fell in love with it because it is a lovely, older property with beautiful grounds in a great location. It is all south facing with amazing views and we love the large windows. We wanted a house where we could walk to the pub yet we love the fact it’s like living in the country.”

She added: “At the time, my son was playing the drums in a group and the seclusion of the property meant no neighbours were disturbed in the pursuit of musical ambition! Needless to say, the drums now languish in his former bedroom and my son has left home to pursue his career as a mechanical engineer.

“When he was a teenager, the house was handy as it was within walking distance of King Edward VI Grammar School and he had his own section of the house, which was very useful for having friends over to stay.”

Julian Bower House is thought to date back to the late 1800s and was previously owned by a former headmaster of the Grammar School. His research indicated that in early times a turf maze or Julian’s Bower used to stand on the grounds of the house, similar to the one which still exists and is a Scheduled Ancient Monument overlooking the River Trent in Alkborough, North Lincolnshire.

The name is believed to be derived from Julus, son of Aeneas of Troy, and the place-name element ‘burgh’ meaning fort or castle. Many mazes or labyrinths in Britain were called Troy and in Scandinavia similar names were used to indicate the city of Troy in popular legend, where the walls of the city were constructed in such a complex and confusing way that enemies who entered would be unable to find a way out.

In Louth, the Julian’s Bower was a place where men would meet, such as at the time of the Lincolnshire Rebellion of 1535. The name was adopted by the house in the last sixty years and there is a mosaic floor-tiled ‘maze’ pattern in the front hallway to reflect this.

Set in an acre of mature grounds, the house has five double bedrooms, a bathroom and two shower rooms. There is a contemporary open-plan kitchen, dining and living room with bi-fold French doors, a split-level decking and stone patio with views of the Wolds, a lounge with two bay windows, feature fireplace and views of grounds and a useful cellar. The gated driveway has parking for several vehicles and there is a modern detached double garage with remote-controlled motorised door. The grounds feature a large lawn on the south side of the house with orchard, kitchen garden, gazebo and timber summer house.

“The house needed a lot of revamping,” said Julie. “It had a certain amount of charm but was very 1970s style inside, with lots of pine cladding. Five years ago we opened it up downstairs, added oak floors and made the most of the views with bi-fold doors in the kitchen and dining area.”

During the renovation works, the couple added an extension and made alterations, creating an open plan kitchen with living/dining space to take advantage of the light and views. In the main reception room, a feature working fireplace was constructed and the original garage was converted into a fifth ground floor bedroom with en suite shower room. The house can be occupied as a main three-bedroom house and separate two-bedroom front wing depending on the needs of the occupiers. A new detached double garage was also built.

“We held our wedding in a marquee in the grounds of the house in September 2010,” said Julie. “The garden is fairly easy maintenance and was landscaped by a professional landscape gardener early in its existence and the results can be seen, as there are beautiful shrubs and trees offering a different aspect throughout the year.

“At the end of the lane, a public footpath runs to Tathwell which is great for walking our Cockapoo, Stanley.”

Now their children have left home, Julie and Peter have decided to downsize and have put their home on the market.

Julie said: “We absolutely love Julian Bower House but we are looking to retirement. We will be staying in Louth but are not sure of our future plans yet. You never know, we might buy a motorhome and go travelling!”