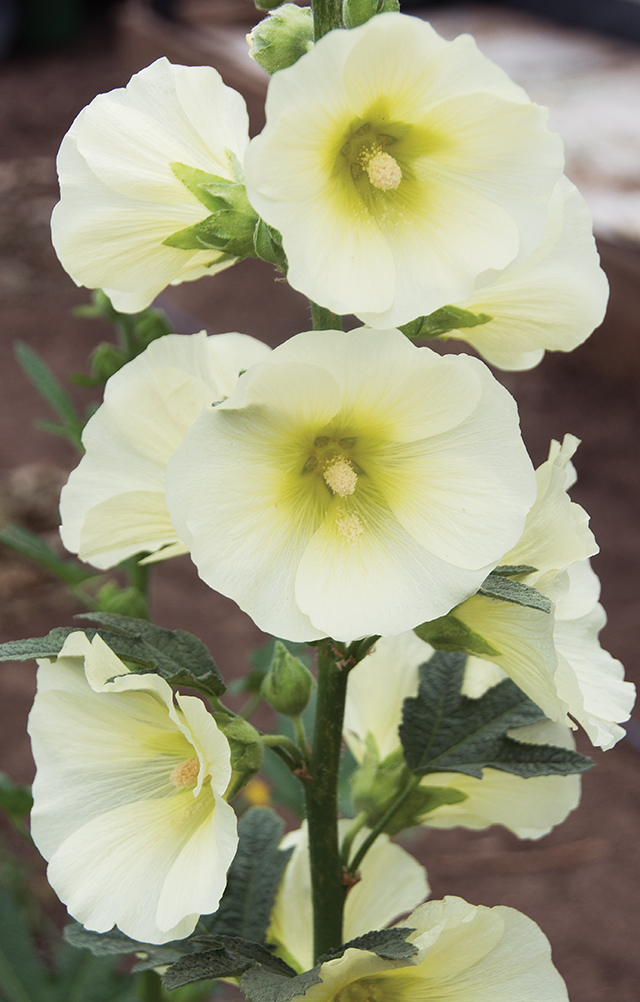 A quiet, country lane on the outskirts of Brant Broughton leads to a remarkable, nationally important plot of land, due to be filmed this month by a BBC Gardeners’ World camera crew. Ten years ago, Jonathan Sheppard, a political lobbyist, and his Newark-born wife Julie, a financial services manager, were working in London when they decided to escape to live in the open breathing-space of the Lincolnshire countryside. Despite the longer commute to their jobs, they have absolutely no regrets.

A chance encounter at the RHS Hampton Court Flower Show had determined this complete lifestyle change. Jonathan grew up in Chesterfield, and, thanks to his gardening grandparents and parents, has always loved plants. He is a Life Member of the Royal Horticultural Society. After enjoying the fabulous show gardens and floral displays, he stopped to talk to the volunteers manning the Plant Heritage stand, curious to know more.

More than 650 National Plant Collections, with about 95,000 plants, are registered with Plant Heritage. This significant charity, founded in 1978 (formerly the National Council for the Conservation of Plants and Gardens) aims to continue overseeing the establishment of well-documented and researched collections of garden plants, and to encourage new collectors to ensure conservation. Access their locations, opening times and details about starting your own collection via their online database: www.plantheritage.org.uk/national-plant-collections

Looking down the missing Genera list, Jonathan spotted noticeable gaps – none more surprising than Alcea rosea, from the Greek Alceos, meaning ‘to cure’, a member of the mallow family used in early medicine. How come these stalwart plants, high summer backbones of every cottage garden border, are now deemed so old-fashioned that no-one wants to collect them? The persuasive conservation advocates threw down a challenge: “Why don’t you have a go?!” Little knowing they were speaking to a man who relishes challenges – one who has run not just one London marathon for charity, but four!

Fast forward to September 2020: having moved into and modernised a bungalow, and developed two acres of surrounding overgrown flat land, enclosed by poplar trees and leylandii cypress, Jonathan achieved national recognition for having established the first Alcea collection, 70 different named types grown totally from seed. He is grateful for advice given by Andy Boyton, the head gardener who cares for the National Collection of Narcissi of Springfields Horticultural Society Ltd in Spalding. Despite countless setbacks, not least the pandemic, Jonathan is now a recognised expert and aims to try his hand at crossing flowers that, aptly in the Victorian ‘Language of Flowers’, symbolise ambition.

My late June visit was not ideal, considering this year’s late spring, recent copious rainfall, and subnormal temperatures. The hollyhocks were yet to flower in all their jewel colours. Luckily, a cultivar with fig-like leaves, supposedly resistant to rust, Alcea ficifolia ‘Yellow-flowered’, was blooming inside the polytunnel, alongside another elegant spike: a recently introduced, well-named cultivar in the Halo series, Alcea ‘Halo Cream’. Both had germinated in a seed cell tray left in the polytunnel. Having had no water for months, the seedlings managed to send their roots through the cell, under some weed matting and into the ground. “The best ones are those that escape. Sometimes those plants that are totally neglected do really well.”

Jonathan appreciates that hollyhocks love growing in a pavement crack. Confessing that they all get rust, an age-old drawback, he is philosophical: “The delivery of the flower is worth the rust.”

The common name stems from early herbals: ‘holyoke’ from Middle English ‘holy’ or ‘blessed’ and the Anglo-Saxon word ‘hoc’ meaning ‘mallow’. Some sources suggest an introduction from Turkey in 1573, though others believe it was earlier, and that they first originated in China. Jonathan was delighted to discover that the celebrated botanist Charles Darwin had also been fascinated by how they came true from seed. The 19th century witnessed a bitter ‘war’ of letters between two rival breeders – one advocating single cultivars, the other more popular and frilly, double varieties. Jonathan concludes: “Fashion is a threat to plants.”

His is a unique, environmentally sustainable and quirky wildflower-garden-meets-plant-laboratory, complete with cold frames, glasshouse (now taken over by Julie) and polytunnel, like arks amongst a breeze-blown sea of grasses and nodding blooms of every hue. To keep weeding to a minimum, he devised a gravel area beside the house where galvanised metal, raised beds, in tasteful shades of cream and pale green, are randomly scattered. These showcase partner planting for prize specimens such as dahlias, and Julie’s gift of a sign, a Gertrude Jekyll saying: ‘Love of gardening is a seed that never dies’.

With unbounded energy during lockdown, Jonathan decided to embark on a second collection: a colourful half-hardy annual, Cosmos bipinnatus, originating in Mexico: a single popular species with 66 cultivars. This too achieved national status remarkably quickly. Use of the heated propagation bed in the polytunnel and old-fashioned paraffin heaters ensured that the frost did not get to the cosmos seedlings, sown slightly earlier than normal to be ready for assessment, at Plant Heritage’s committee meeting in June.

A striking army of purple ‘soldiers’, Allium ‘Ambassador’, drumstick Allium ‘sphaerocephalon’ and sweet pea wigwams lining a grass broad walk lead to the two collections. The leylandii have been pollarded for firewood. Their sculptural stumps stick out like chimney pots above the grow-factory polytunnel. A large stand of willow is coppiced for compost and mulch. Watering, purely with rainwater, remains a back-breaking task. Ever enterprising, Jonathan has installed huge, industrial IBC tanks – Intermediate Bulk Containers: reusable, multi-use industrial-grade containers.

Cosmos, a word for the universe, also suggests harmony and order. As with his hollyhocks, the new collection is grown in a grid system, experimenting both in the ground and in containers in full sunshine. Single specimen labelled bins, with holes for drainage, solve the problem of rabbits, but are quite an investment in compost. Who would have thought I could be excited by black and silver dustbins ‘on parade’? They were full to the brim with attractive fern-like foliage, with budding and daisy-like cosmos bursting with colour.

Hard-pressed to choose, the observant plantsman indicated Cosmos ‘Xsenia’ as his current favourite, with its unusual peach-tinted flowers. Some names, such as the sunray daisy ‘Apollo White’ reflect the form. Others amuse, like ‘Lemonade’, or the ‘Cupcake’ series, and the anemone-looking ‘Pink Socks’. The effervescent, vigorous ‘Fizzy Purple’ is eye-catching with an extra inner row of petals. Despite gloomy, light rain I came away elated, blessed with a generous gift of seedlings, Cosmos ‘Cupcake Blush Pink’ for lasting summer colour, somehow thinking champagne and Mary Berry!

Now with five collections based in Lincolnshire, Plant Heritage are seeking someone to take on a National Collection of Veronica. Interested? Jonathan’s passion for flowers is infectious. He is already planning next year’s planting. “Grow what brings you pleasure. Planting makes you look forward. Gardening gives you a purpose.”