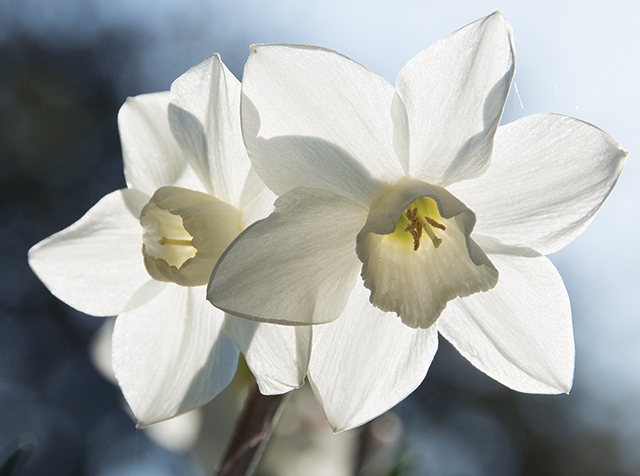 Dancing with the daffodils

Optimists look on St David’s Day as the first day of spring, a day to gladden hearts, even if hijacked by Welsh Rugby supporters with daft, canary-yellow, daffy hats!

Pessimists refuse to celebrate until the sun shines less wanly and longer. Shakespeare waxed lyrical on ‘Daffodils, that come before the swallow dares, and take the winds of March with beauty.’

Searching online when confined indoors by the weather, I found a couple more thought-provoking daffodil quotations. American writer Madeleine L’Engle Camp believed: ‘A daffodil pushing up through the dark earth to the spring, knowing somehow deep in its roots that spring and light and sunshine will come, has more courage and more knowledge of the value of life than any human being I’ve met.’

So be brave; honour daffodils by planting in big clumps for greater impact. American architect Hugh Newell Jacobsen recalled Picasso as saying: ‘No one has to explain a daffodil. Good design is understandable to virtually everybody. You never have to ask why.’

A wealth of varieties
The word ‘daffodil’ stems from medieval Latin: ‘asphodillus’ meaning ‘lily’. By the 1590s, perhaps from Dutch bulb producers of ‘de affodil’, the ‘D’ had merged in.

Daffodils were also called narcissus or jonquil and, in German, ‘Easter bells’. The name ‘Lent-lily’ was not used commonly until 1827. Now, after almost two centuries of experimental hybridisation by nurserymen, and amateur enthusiasts, a wealth and variety of fragrant cultivars exist, separated in 13 distinct classes, in addition to historical varieties.

Narcissus poeticus has white tepals and, rather than a trumpet, a short, light-yellow corona with a narrow red edge. Native to central and southern Europe, it was first mentioned long ago, probably by Virgil, the ancient Roman poet born 70 years before Christ, relating the myth about the Greek hero Narcissus.

Regardless of its apt name, it was not recorded in botanical terms until 1753, by the Swedish botanist Carl Linnaeus in his book Species Plantarum.

Some striking, latter-flowering, long-lasting, miniature daffodils such as ‘Sailboat’, Verve’ and ‘Pueblo’ produce excellent floral displays in borders or in pots grouped together.

Many quality daffodil species will divide and spread themselves around. Lincolnshire villagers have planted swathes along the verges of their roads, and in churchyards, as a welcome to all visitors and passersby. How many thousands of A17 drivers negotiating the A17 Holdingham roundabout at Sleaford have noticed its great golden circle?

In the north, Central Park, Scunthorpe’s premier park, comes to mind as a great open space to exercise with an audience of daffodils nodding their approval! Many an expert’s daffodil garden in the Wolds’ east deserve a visit, as does Springfields Festival Gardens in the south.

As a fenland county famous for its bulb industry, competing with Cornwall, let alone the Netherlands, I should think there isn’t a historic garden or public park without daffodils the colour of sunshine.

Wordsworth’s anniversary
Nationally, all four RHS gardens are marking the 2020 anniversary of William Wordsworth’s birth with a celebration of daffodils. Sharing the same Christian name as Shakespeare, the Cumbrian poet enjoyed an equally successful career, signalled by his apt surname. Coincidentally, both pillars of English literature passed away on St George’s Day, 23rd April, while daffodils were blooming.

Probably the most famous English poem ever written, which for many of us was the first ever committed to memory at school, ‘I wandered lonely as a cloud’ is Wordsworth’s most celebrated. He penned it in 1804 after reading his loving sister Dorothy’s journal.

Her writing conjured up a stormy day, two years earlier, spent walking along Ullswater shore. The daffodils had ‘tossed and reeled and danced, and seemed as if they verily laughed with the wind that blew on them over the lake’. Moved by the memory, her brother wrote several versions over the years.

Wordsworth defined poetry as ‘the spontaneous overflow of powerful feelings: it takes its origin from emotion recollected in tranquillity.’ In the last edition, he elected to enrich the charm simply by changing the word ‘dancing’ to ‘golden’. The last couplet sums up our ‘feel-good factor’ glimpsing spring’s first delightful ‘host of golden daffodils’, that morale-booster that unites all enlightened nature-lovers.

‘And then my heart with pleasure fills,/And dances with the daffodils.’

We can appreciate the depth of his emotions and envisage that lakeland landscape, at the same time trawling our own experience to recall visions of show-stopping beauty.

Long before Wordsworth walked the Cumbrian hills, narcissus appeared in both written and visual arts of antiquity, which were found in graves of Ancient Egypt, and inspired perceptive prose by Muhammad, the prophet and founder of Islam:

“He that has two cakes of bread, let him sell one of them for some flowers of the Narcissus, for bread is food for the body, but Narcissus is food of the soul.”

As a child, did you ever skip around a park with daffodils bobbing in the breeze? You don’t have to be young to feel the urge to caper!

Charity Milestone
This year, a remarkable £10 million in donations has been reached by the marvellous ‘daffodil’ cancer charity, Marie Curie, since their partnership with the National Garden Scheme began – enough to make charity fundraisers and supportive garden owners feel like dancing!

‘Dance then wherever you may be’, Sydney Carter’s famous hymn ‘The Lord of the Dance’ invites us, in the catchy refrain of his well-known Easter hymn.

This praises the dancing pattern in the life and words of Jesus, to a melody adapted from an American Shaker song, ‘Simple Gifts’.

Both Carter and Wordsworth’s words, far from simple, had much in common – an enduring legacy to feed the imagination and spread joy. Likewise, a tied bunch of ‘Pheasant’s Eye’ makes a foolproof, fragrant Easter bouquet.

I wish you and your loved ones a Happy Easter!