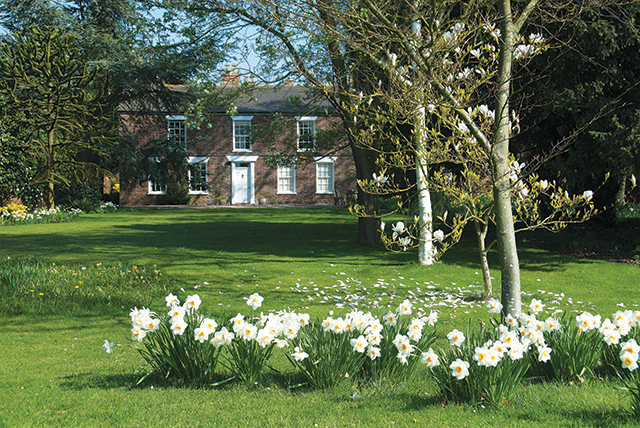 Steffie Shields explores Gill & David Boldy’s Firsby Manor Garden.
In 1834 Thomas Allen, a historian, described Firsby as ‘an obscure place on the north side of the River Limb (sic) between Wainfleet and Spilsby, being five miles distant from each’. The region’s former peat and silty marsh wetlands were transformed by drainage into flat fenland into dark, loamy soil over a heavy clay sub-soil, a boon not only for cereal and vegetable farmers east of the Wolds, but also for serious gardeners. Later, with the coming of the railways, every summer thousands of Victorian holiday-makers heading for the coast from all over England encountered Firsby, the busy junction on the main Great Northern Railway, London to Cleethorpes railway for the Skegness and Spilsby lines.

Since the 1960s station closure, thanks to Beeching’s cuts, the ‘off the beaten track’ rustic peace has returned to the village. Nowadays, on one Monday in mid-April and one Sunday in late May, garden tourists flock to Firsby by road, rather than by rail, ever since Gill and David Boldy decided to open their three-acre Georgian farmhouse garden for the National Gardens Scheme, the so-called ‘yellow-book’ charity.

Gill Boldy kindly invited me to see her daffodil collection when we met at the annual Spring Flower Show, held under the auspices of the Lincolnshire Daffodil Society together with Springfields Horticultural Society, at the Springfields Conference Centre in Spalding. Standing beside amazing, serried ranks of upright and pristine specimen narcissus, Gill was quietly modest about her prize-winning blooms. She confessed to feeling somewhat daunted at the prospect of taking over the chairmanship of the second oldest daffodil society in the country, founded in 1902.

A few days later, on a glorious, late April morning, I drove across to Firsby Manor with anticipation, pleased at the prospect of exploring pastures new and a chance to learn more about the much-loved spring perennial of the Amaryllis family. On first sight, I sensed generations of tender loving care that have gone into nurturing the setting. A Monkey Puzzle tree, its trunk sporting lethally sharp red and lime-green thorns, and a more cuddly blue Atlantic Cedar frame the house in picturesque fashion. The fresh new leaves of one or two feature deciduous trees were just unfurling, including a weeping willow leaning over the pool and a fine Acer pseudoplatanus.

The Boldys arrived over twenty years ago, a perfect spot to bring up a family. The gardens have blossomed year on year and spread into the adjoining woodland. A traditional, more formal yew hedge enclosure entered under a rose pergola offers ‘a garden room’ shelter from east coast winds. A stone path leads to a smart glasshouse at the end of a striking herbaceous border benefitting from the warmth of a long, south-facing brick wall. Here ‘hot’ colours in Gertrude Jekyll style were punctuated with Persian lily spires of deep purple bells, Fritillaria persica. Vermilion tulips in bold clay pots caught my eye just as vivid as the strutting ‘designer’ cockerel with his hens nearby.

Shafts of sunlight lit up delicious views as Gill led me into her charming wood, completely underplanted with forget-me-nots, bluebells, yellow cowslips and bright white, yellow and red bulbs as if smarties liberally sprinkled. I was mesmerised. Gill appeared as easygoing and as natural as her woodland garden, which I suspect needs just as much management as the more formal parts of their garden. In a semi-shaded grassy clearing, we came across a miniature garden to a little wooden children’s summerhouse, amidst clouds of forget-me-nots. A chequer-board of small flowerbeds, each half a metre square, each home to a dozen narcissus flowers of a single variety, part of Gill’s ever-growing daffodil collection.

Further on, yet more daffodils were bedded in groups, clearly labelled in narrow rows in full sun. Some say the name ‘daffodil’ is derived from asphodel, the flowers generally white or yellow, or a combination of both. Sometimes known as ‘Lenten lily’, ‘daffadowndilly’ and jonquil, they trumpet spring’s arrival, though beware, the bulbs are poisonous. Mostly cultivated in the Channel and Scilly Isles, Great Britain and Holland, the genus is officially classified in twelve divisions, totalling about fifty species. Passionate growers and breeders have now produced thousands (or should I say ‘hosts’) of cultivars according to form, size, number of flower heads per stem, and colour. Daffodils are now cream, pale lemon, bright orange and even pink!

The small, natural-looking jonquil ‘Sundisc’ almost as if a rounded, buttery-yellow button, with leaves as fine as blades of grass, is a firm favourite of Gill’s. ‘Segovia’ is a subtly elegant, delicate flower. Sometimes names attract – Narcissus triandrus ‘Tuesday’s Child’ or the relatively new cool, white ‘Lincolnshire Lady’ for instance. I was drawn to ‘Kaydee’, a Cyclamineus daffodil only 20 centimetres high, with snow white, reflexed petals contrasting an unusual bright coral cup with hints of deep pink. We circled round past orchard trees circled with daffodil drifts towards a breathtaking and memorable south view of the house, where all the glistening blooms in the border and naturalised around the magnolia tree echoed the white-painted door and window frames.

Both the indoor Springfields Flower Show and out-of-doors Firsby Manor garden offer unique opportunities to investigate many different, fascinating daffodil cultivars. Make a note of those worth investing in to refresh your own patch, safe in the knowledge that most narcissus are long-lived. Firsby Manor is now well-known and discovered, the very opposite of obscure! No words of mine will do justice to the floral sense of place, perfume and birdsong in this unforgettable garden. However, I hope my photographs speak volumes to tempt you across county on open garden days to experience the enchantment of its dappled light first-hand.

As I left, David kindly gave me a splendid, mixed bunch of special daffodils with a flourish. I came away uplifted with a firm resolve to plant more bulbs for delicate and graceful effect. I will also sprinkle forget-me-not seeds along the paths and under the trees in my garden, in the hope of matching the heavenly atmosphere Gill and David have created. Happy Easter everyone!