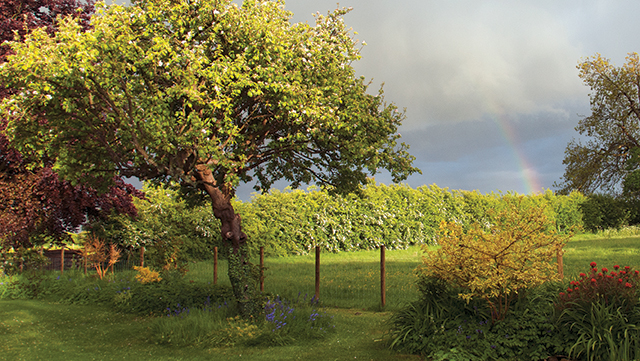 Steffie Shields suggests taking a closer look as gardens and countryside blossom in earnest.
‘Flowery’ May’s a month to sit and muse – or, better still, walk and muse. From 19th May, the two-week Lincolnshire Wolds Walking Festival, organised these last fourteen years by Heritage Lincolnshire and the Lincolnshire Wolds Countryside Service, offers a fantastic incentive to get out and about at last. Cast off your coat layers, may is out!

Step out in the fresh air with your toddlers or teenagers. The only Area of Outstanding Natural Beauty in the East Midlands is worth exploring. (For more information about walks ranging from 1 to 76 miles, and the launch event in Nettleton, see www.woldswalkingfestival.co.uk/walks.) Whether you choose a challenging trek, charging across hilltops, or prefer a gentle amble around a market town, where ‘Ma and Pa Larkin’ might have done their shopping, notice how the countryside warms up and goes into top gear. Take time to pause along the way. Observe those darling buds in gardens great and small.

Hedgerows are dense with tiny white flowers, instead of snowdrifts. Native hawthorn blossom spreads along verges of verdant pastures like tufts of cotton wool, as seen in artist David Hockney’s iconic Wolds paintings. As a beautiful, if gnarled, ‘faerie tree’ in old parks such as Burghley, hawthorn can live to a great age. Look out for small, light red, double flowers of may blossom; Crataegus ‘Paul’s Scarlet’ was introduced in the 1850s, a sport of pink hawthorn originally found in Hertfordshire. Our garden has a stately specimen probably planted by the gate, by a Victorian rector when first developing the orchard near the church. A good deal taller than three red may trees setting off Temple Bruer’s preceptory tower, in full bloom it reminds me of the garden where I grew up.

Recently, I listened intently to John Sales, former head of Gardens and Landscape Parks at the National Trust, launching his memoir at the Garden Museum in London. Despite a long career in horticulture, including as a much-respected RHS Chelsea judge, John has not lost his youthful enthusiasm for gardens. His book Shades of Green is a delightful treasure trove of observations threaded with a positive philosophy honed from nurturing people as much as gardens, encouraging and supporting budding National Trust head gardeners for twenty-five years. A special selection of fifty jewels in the Trust’s crown, it gives readers great insights and a bucket list of garden icons and shrines to visit. I was disappointed not to find Gunby or Belton in the mix. However, among many thought-provoking ideas, including ‘Gardens are a process, a developing eco-system. It doesn’t work to freeze them’ one pearl of wisdom resonated in particular: ‘It’s a miracle. Seeing plants grow is a miraculous thing. It makes you interested in the future.’

My garden photography attempts to freeze-frame a few of those miracles. Come the merry month, evenings are spent exploring my garden, camera in hand, rather than a glass of wine, to ‘drink in’ the last vestiges of sunshine. Is this when flower fairies emerge with their dainty watercolour brushes? No time for reverie. I work fast to catch the all too fleeting rainbow above the hawthorn, until, with one last shaft, as if from an angle-poise lamp burnishing the garden, the setting sun disappears silently and swiftly below the horizon.

Silky hairs are feathering the margin and underneath brand new, light green beech leaves emerging from coppery, nut brown sheaths and gently unpleating in the hedge marking the boundary. Backlit in early morning, or when evening rays, minute silvery wisps as downy and fragile as an infant’s first head of hair will disappear as leaves mature. Insignificant yellowish green flowers (both male, catkin-like, and female with caps) dangle amongst leaves and ripening fruits, easier to spy on an adult beech tree, rather than a dense clipped hedge. Textured prickly green husks soon become dark brown, with shiny triangular beechnuts inside, known as beech mast which, as husks dry out and burst later in the year, will scatter abroad.

I glance up at the silvered trunk of a copper beech tree spreading above my head, non-native Fagus sylvatica purpurea. Young fiery tones in ribbed, unfurled leaves dancing carefree in the breeze, are excitingly emphasised by low sunbeams shining through. This stately tree works well as an eye-catcher on the east corner of our plot, in the last vestiges of evening rays. I regret, rather as one mourns kittens and puppy dogs growing up, how soon copper beech leaves age to sombre dark, purple.

The upright young rowan, Sorbus aucuparia, we planted as a sign of welcome opposite the may-tree by the gate is flowering well, its regular, pinnate leaves easy to photograph against the sky. Later, I return to look again. A single bunch of blossom, lit up like a lightbulb, has captured a sunbeam within.

Another ‘new kid on the block’, planted to become a good companion to the copper beech, a red maple, Acer rubrum, shakes surprising clusters of tiny scarlet flowers to match its red stems, protected by still limp, veined leaves. Back-lit again, it glows as a Tiffany lamp. Hairy oriental poppy buds nearby, as round as doorknobs, swell with shining raindrops nestling amongst bristles. One newly burst reveals a sudden splash of gaudy, orange-red, a single paper thin crimped petal, a fan promising summer around the corner.

One May, I remember admiring Davidia involucrata, for the first time at Doddington Hall east of the iris parterre and had to look it up. I have never encountered another in the many Lincolnshire gardens I have haunted. The common name is handkerchief tree or, sometimes, dove tree or ghost tree. Mid-sized, heart-shaped red to purple leaves yield a spicy, incense fragrance in spring. Named in the mid-nineteenth century for Père David, a French missionary botanist, who discovered it in the deep wilds of China, this beautiful tree has stunning, large, white bracts hanging from its branches like pinched hankies.

Call me old-fashioned, I still love a starched white, cotton handkerchief tucked in my sleeve or handbag. As one prone to tears far too often, it is appropriate, and high time (especially as it takes over ten years to flower) for me to plant a Davidia in our garden. ‘Trees come slowly for our grandchildren’s shade’ the writer gardener John Evelyn (1620–1706) a great advocate of planting trees, tells us. I will be patient. Let’s paraphrase a Chinese proverb: ‘He who plants a garden plants happiness’, in the hope that John Sales would agree: ‘He who cares for, and conserves, gardens shares happiness’.