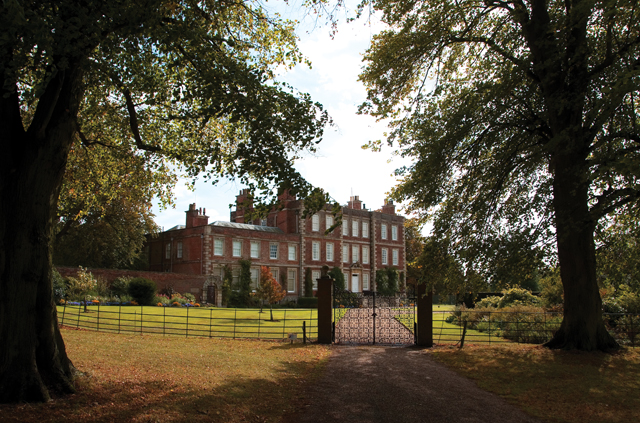 Steffie Shields finds seasonal joy at Gunby Hall
Time again for this traditional refrain to sound and Gunby Hall, near Spilsby, is the perfect place to spur us into a festive mood! Recently exploring the gardens, I followed a gravel path, attractively edged with entwined hazel sticks, through a carpet of veined, dark green ivy under stately trees and winding on effortlessly towards St Peter’s Church, nestling between pleasure ground and park pasture. A young gardener was patiently clipping a perfect, straight evergreen hedge. Lonicera nitida, box honeysuckle, or ‘poor man’s yew’, encloses the isolated churchyard. This dense, small-leaved, bushy and spreading shrub makes ideal, medium-height hedging. Sam Hodgson confided that, after being supported at Gunby on a Lincolnshire County Council Workstep Scheme, he was pleased to be taken on permanently.

There has been a church here since the thirteenth century, the place imbued with Massingberd family history, resting in peace. Turning the corner of the present Victorian build (1870), I was confronted by another reminder of Christmas: a mature holly tree, ablaze with scarlet berries makes a splendid gate guardian. Fearing the worst winter lay ahead, head gardener Clive Ironmonger later reassured me. This tree crops well every year. No matter how hard the season or how hungry, birds leave these ‘holy’ berries well alone. I imagine local ‘flower ladies’ will soon be snipping ‘The Holly and the Ivy’ to decorate the church. Inside, the decorative stained-glass east window, designed by Morris and Co (1906, after the death of William Morris) recalls the Nativity, pre-Raphaelite style with typical Burne- Jones angels.

Nikolaus Pevsner described Gunby Hall as ‘austere and puritanical’, but I admire its dignified simplicity, its mellow, plum red bricks. It must look pretty as a Christmas card when surrounded by snow-blanketed gardens. There have been Massingberds at Gunby since 1640, rising from yeoman farmers to baronetcy. This house dates from 1700, according to the west door keystone, built by the last baronet, Sir William Massingberd, who died twenty years later. The name then descended through the female line. Despite a sympathetic Victorian extension, Gunby is recognised as one of the finest small William and Mary country houses. The small park, now reduced to about forty-five hectares, was laid out in 1730 by a nephew, William Meux Massingberd, with borrowed views to rolling farmland, later, during Henry Massingberd’s ownership, enlarged and enclosed by ‘The Belt’, a narrow tree plantation on the north and west boundaries. The lime tree avenue, along the rising drive, framing the approach was planted in 1889. However the old pigeon cote, complete with nesting boxes and a potence, a revolving ladder to reach the eggs, some of the kitchen garden walls, and the canal ‘South Pond’ may pre-date the house. In this year’s drought, the water level was the lowest Clive has ever seen. Involved in the gardens’ care and development since 1992, in 2010 he was promoted head gardener. Hedges are cut with expert precision, almost pyramidal in shape, “to let light flow down the full face of the slope.” He remembers his toy wheelbarrow and, still a toddler, mixing compost with his father. Soon he had his first vegetable garden, working alongside his grandfather.
“I have never not gardened,” said Clive.

Between 1783 and 1800 the Hall was let to Sir Peter Burrell. An avid cricketer, who married Priscilla Bertie, Baroness Willoughby de Eresby of Grimsthorpe, Burrell commissioned designer Humphry Repton in 1790 for a ‘Red Book’ of improvements for his Kent estate, Langley Park. One wonders if he took an interest in upgrading Gunby’s grounds. In the Regency era Peregrine Langton carried out extensive tree planting. A magnificent, spreading Cedar of Lebanon, the last survivor of five that were set, dates from 1815, Battle of Waterloo time. Sadly, many oaks and elms too have been lost through disease or storm winds. Langton took the name Massingberd on marriage to Henry’s daughter Elizabeth, an amateur artist, who probably designed the charming, pale blue domed rotunda, a perfect spot to draw and paint watercolours of the flower garden.

Part of the gardens’ quirky charm, nothing is square or parallel. Much-loved, harmonious borders spill over with herbaceous variety, texture and colour, and memorably feature either side of a classic, listed brick archway leading to the Pergola and Cordon Apple walk, the most photographed ‘gate hole’ in Lincolnshire, if not England. I stopped for a brief word with Pat Pears, one of a handful of dedicated, much-valued volunteers, busily putting the potager to bed for winter. Occasional working holiday groups help too, with varying degrees of expertise. Clive showed me the old brick apple store, with this season’s abundant harvest neatly ranged in wooden racks in the chill gloom. Reaching the east-sloping vegetable garden, it became clear that, above all, this is where his heart is happiest. Apparently the potato ‘Maris Peer’ was introduced in 1962, the year he was born! Clive rightly takes pride in fruit cages and espaliers, and ordered lines of vegetables, rich products of hard graft labours (that may be bought in the shop). Moss covered pear trees range down the central cross path, bordered with interesting perennials and standard roses, fireworks of dahlias for cutting in one corner, not far from Reverend Joseph Pemberton’s old-fashioned rose collection, the early twentieth-century breeder, who invented the term ‘hybrid musk rose’.

From 1897 Major Stephen Massingberd and his wife Margaret made additions to the Hall and laid out formal yew enclosed gardens to the south. These need constant rejuvenation. The original Irish junipers have been replaced. The lavenders are renewed every five years. A never-ending battle with moles means that verdant bowling lawns, or allées, are challenging to keep finely level. Clive calls them ‘moling alleys’! Stephen left the property to his youngest sister, Diana and her husband Field Marshal Sir Archibald Montgomery, who, in accordance with their mother’s will, took the name Montgomery-Massingberd. Rising to Chief of the Imperial General Staff, the Field Marshal took great interest in the gardens on retirement and was responsible for much of the heritage fruit tree planting (I remember one of my first introductions to heritage came from enjoying reading his nephew, Hugh Montgomery-Massingberd’s articles on historic houses). Rudyard Kipling was a close friend. Hence a few lines of his famous poem ‘The Glory of the Garden’ are appropriately engraved in stone on the rose garden wall.

Our England is a garden, and such gardens are not made
By singing: ‘Oh, how beautiful!’ and sitting in the shade.

So it is hard to believe that this tranquil spot was once threatened by war. Amidst WWII pressures, the Air Ministry sought to demolish Gunby in order to extend the runway at Great Steeping airfield. It was saved at the eleventh hour. In gratitude, the Field Marshal donated the house to the National Trust in 1944, for future generations to enjoy, and built ornamental entrance gates to commemorate the end of the war.

Gunby was close to Tennyson’s heart too:
an English home – gray twilight
On dewy pastures, dewy trees
Softer than sleep – all things in order stored,
A haunt of ancient peace.

Was he remembering apple store or churchyard, I wonder? Little seems to change. Whatever the season, whether spring bulbs and anemones in the wildflower walk, roses in June, autumn’s gay sunflowers, lush apples hanging like baubles, or dark December afternoons along the ‘Ghost Walk’, every visit seems a gift! In the late 1990s Gunby’s Millennium Project focused on the restoration and re-hanging of St Peter’s bells. I imagine these will be ringing out across the park this Christmas giving extra joy to the new tenants of Gunby Hall, their family and friends. Then, above the 1735 coach house and stable court (the Adam brothers’ bell cote brought in 1917 from Hook Place, Hampshire) the clock will strike the arrival of the New Year, her Majesty’s Diamond Jubilee Year, like Gunby Hall, also well worth celebrating.