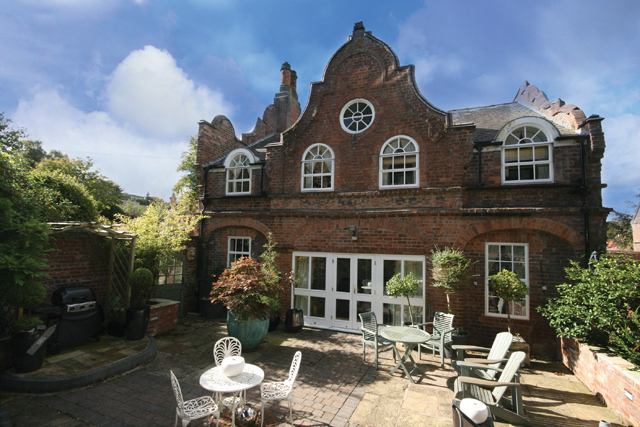 It took Audrey Lidgard less than two days from stepping through the front door of The Coach House at Louth to buying the place.
The stunning Grade II* listed building with its interesting Dutch architecture, formal walled gardens and homely feel was exactly what she had been looking for.

“I bought the house in thirty-six hours,” Mrs Lidgard said. “I came to see it on the Wednesday and I remember walking through the front door and thinking ‘I’m home!’ By the Friday morning, I had bought it.

“It had such a lovely feeling and everybody who visits says the same.”

Mrs Lidgard had previously been living in Holly Manor next to the Brackenborough Hotel, Louth with her husband John. The couple owned and ran the hotel for fifteen years and also the Ashbourne Hotel in Killingholme for five years, until Mr Lidgard passed away.

He left a fine legacy of three sons – Jonathan who lives in Hove, Brighton and is a captain for British Airways; Damian who lives in Halifax, Canada, and is a Doctor of Marine Biology and Ashley who bought both hotels with a partner – and a daughter, Haidee who lives near Dublin, southern Ireland.

When Ashley bought the hotels, Holly Manor was tied to the Brackenborough Hotel so Mrs Lidgard could not stay and found herself looking for a new home.

“The Coach House was ideal for me on my own,” Mrs Lidgard said. “It was the right size and had lovely south facing gardens. My sons thought I was a bit hasty but didn’t think it was the wrong decision, as it’s one of the best properties in this area.”

Built around 1840, The Coach House houses the coaches and horses for the Sycamores next door. It became a private residence in the 1980s, by which time it was derelict.

“Barry Hanson, of Hanson Cakes, and his wife lived in the house first,” Mrs Lidgard said. “The front entrance has an image of a wedding cake in the inner glass door that he wanted to put in his shop, but the council wouldn’t allow it.”

After moving into The Coach House on 1st June 2005, Mrs Lidgard set about decorating and renovating it to suit her taste. Over the next four years she installed a bespoke state-of-the-art kitchen, from Richard Sutton Kitchens of Grimsby, had three new bathrooms fitted, replaced the boiler and had a new stone fireplace built in the thirty-foot lounge.

“The house was in spot-on condition but had been decorated in blue and yellow which didn’t match any of my furniture,” said Mrs Lidgard. “I wanted the walls to be plain so I had all the wallpaper stripped and some walls painted with emulsion. The walls in the lounge and hallway were covered with silk wallpaper and I hung silk curtains to match.

“I chose a cream and gold colour scheme so it wasn’t offensive to anyone.”

Now the house is a mixture of traditional architecture and modern interiors. The entrance hall has etched, Victorian wooden doors leading to a reception hall with ornate staircase to the first floor and an inner hall with a linen cupboard.

The kitchen has a custom-designed range of Alno wood and glass Palisander units by Richard Sutton Kitchens, with black granite work surfaces and a range of appliances including a dishwasher, Gaggenau steam oven and oversized built-in corner fridge. There is also a utility room and boiler room.

A keen gardener, Mrs Lidgard ensured the formal gardens were not overlooked during the renovation programme.

“Initially I could spend all day in the garden,” said Mrs Lidgard. “Now, since my recent hip operation, I find gardening difficult but I enjoy sitting in the courtyard in the mornings.”

Mrs Lidgard had a fountain and two large lions installed in the top garden, a fountain and walls with raised beds in the courtyard and landscaping to the side garden.

The property is very secure – the house is alarmed, there is an intercom on the electric gates, high walls and fences and lights throughout the garden. Mrs Lidgard explained: “I was living on my own and I wanted to be able to drive through the electric gates without having to get out in the dark. I also wanted to see visitors without having to walk up the drive at night.”

Now, after some health difficulties, the couple have decided the time is right to place the house on the market.

“With our current state of health, the gardens are now too much for us to cope with and it’s time to downsize,” said Mrs Lidgard. “We’d like to move to the Cliff Villages area to the south of Lincoln and have seen a property in Navenby that would be ideal. It would mean being nearer to our families and friends and give us more of a social life.”

She added: “I’ve felt very much at home and safe in this house and it’s been a pleasure to invite people to my home.

“My sister Eileen comes to stay quite a bit and says she is going to miss the house, too. But I’ve moved around all my life and I’m quite happy to move again.”