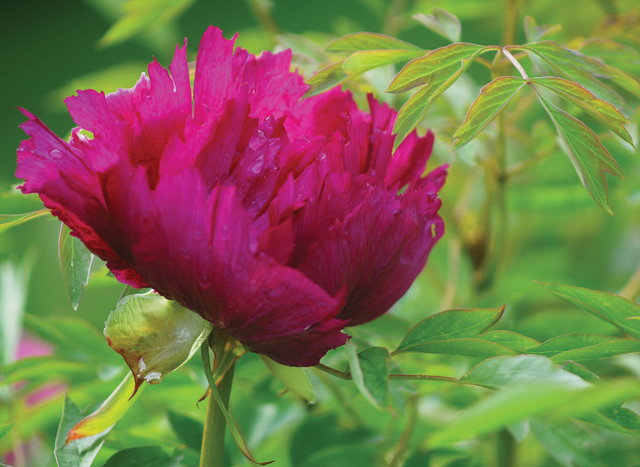 Steffie Shields praises the theatrical qualities of peonies.
If you think of your garden as a stage, where the four seasons provide a different act of a year’s production, sometimes you crave a star act. This month sees the vigorous spring chorus coming together in a riotous, rainbow crescendo in sunshine and in rain, that can only be described (to use a noun or adjective beloved of actors and actresses in the fifties and sixties) as darling buds of May. Apple and orange blossom, tulips, late narcissi, bluebells… the floral excitement builds to a Chelsea climax, before the shears come out to cut some pushy types down to size. Mid-April through to mid-June, a fantastic group of plants stand out from the crowd, before bowing out to much-beloved roses. Both earlier flowering tree peonies (actually medium-sized, deciduous shrubs rather than proper trees) and herbaceous perennial peonies are show-stoppers in colour and in form, and some have special fragrance.

Exotic yet hardy plants that flourish in sun and shade, but suit a southern or western aspect in particular, tree peonies are still found wild in mountain woodlands from Southern Europe to Asia, preferring fertile, neutral to slightly alkaline soil that is well drained and neither too wet or too dry. Named after Paeon, the physician of the Greek gods, they have been nurtured, and loved by the Chinese for at least two thousand years who appreciated their value firstly in medicine, long before art and horticulture. Herbalists use peony medicine, an extract of root to invigorate the blood, clear blood stagnation, and lower blood pressure. The Chinese are famous for breeding the species and their grafting techniques; they hold peony festivals every year. Peonies feature on Chinese porcelain, furniture, wood carving, screens and tapestries. Since their eighth century introduction to Japan, they have similarly inspired Japanese artworks, literature and poetry. It was not until 1789 that our local horticultural star, Sir Joseph Banks, having heard about tree peonies from other travellers, commissioned a Doctor Duncan with the British East India Company to purchase and bring back a tree peony that was then planted at Kew, the first in Northern Europe. In America there has been a great interest in breeding and a Peony Society for over a hundred years, where one was only founded in this country in 2000.

Tree peonies feature in several local heritage gardens open to the public. A pristine Potager was laid out in the 1960s by designer John Fowler with crossing paths to represent the Union Jack on view from the reception rooms of Grimsthorpe Castle. Here the topiary medlar trees look like giant mushroom darning tools. On the east, along the stone wall, you will find a swathe of scented tree peonies, Paeonia delaveyi. When all around is fresh spring green, the fiery, fingered leaves of this shrub emerge like a flaming torch. Their maroon, waxy red flowers make a stylish contrast to the pure white blossom of espalier pear trees. Of course, Colefax and Fowler, his firm, are renowned for luxury, flowery furnishing materials, many inspired by such effective plant combinations.

Also, a couple of dramatic, double-flowered tree peonies ornament the Rose Garden terrace below Belvoir Castle. Each proud, upright bud, standing out against the dark yew hedge back-drop, is as architectural as a temple finial. Eventually, unfurling, they show off their secret treasure: delicate, deep pink frilly blooms the size of dinner plates! A couple of weeks later, it is worth taking a longer walk through the woods along the edge of the escarpment to a romantic clearing, the Duchess Garden, home to a rustic summerhouse, perhaps the finest ‘hermitage’ in the country. The secluded peace, birdsong and a serpentine, jewelled border of later-flowering herbaceous peonies will take your breath away.

I have recently planted the popular Japanese peony, Paeonia lactiflora ‘Bowl of Beauty’ – my mother-in-law’s favourite – two layers of soft carmine pink petals cupped around a large shaggy cream centre, which will undoubtedly lend an essence of Barbara Cartland to my borders. You will find this star in Normanby Hall gardens. Houghton Hall in Norfolk provided one of my top ten garden highs of the 2010 visiting season. Here, in the walled garden, a sensational, long Peony Walk, shaded by a wisteria-laden pergola offers a dazzling display of vibrant magenta, carmine, single ruby red, and white or pink double peonies under emerging ferny, lime green canopies of standard acacia trees. The sight stopped visitors quite literally in their tracks.

That was how it must have been for plant hunter E H Wilson (1876 –1930) who introduced a vast range of Asian species, “…the first time I saw a tree peony, six feet high by six feet wide, covered with over three hundred pink blossoms, I knew I had to have not just one, but a collection.” Kelways nursery, founded in 1851 in the Somerset levels, made their name with these plants, and continue to stock a wide selection. In the Edwardian period Japanese gardens and peonies were all the rage. A ruffled rose–pink peony was named for one of the great French actresses of early film: Paeonia ‘Sarah Bernhardt’. Somehow, frothy, white herbaceous peonies are so feminine; they always make me think of Renoir’s paintings and Cecil Beaton’s black and white photographs of the Queen Mother, bringing, like croquet lawns and cucumber sandwiches, a nostalgic touch of old world charm.

A classic and tough tree peony, known as the Tibetan peony, Paeonia lutea acts as gate-guardian to our patch. As the coppery-tinged leaves unfurl early in the year they appear to clasp rounded, swelling buds like clapping hands. Then a sunshine display of single, large, buttercup, yellow-flowers. No surprise there, peonies belong to the buttercup family, Ranunculaceae. Once the blooms are spent, the seed heads too are intriguing. Later still, their sculptural seedpods warm to bright scarlet as autumn approaches, swelling to bursting-point. They split slowly to reveal large, eye-catching, shiny black seeds, like black gold, a wealth that seeds around happily. But be warned. Patience is a virtue when it comes to growing them on. Some take years to flower. I planted one herbaceous golden peony, Paeonia Mlockoewitshii, commonly known as ‘Molly the Witch’, nine years ago. Each year I watch the leaves appear and strengthen, still waiting for the shy beauty to show her creamy lemon face. Imagine the excitement when she does! Apparently, if you remove any bud that appears in the first two years, you get better flowers. I doubt I have the strength of mind.

Never failing as a talking-point, the flowers seem fleeting, but stay long in the memory. Peonies are long-lived, strong and easy care. An annual encore, adding drama for over fifty years is worth the investment. If they could talk, I swear they would proclaim each May: “All right, Mr. DeMille, I’m ready for my close-up.”