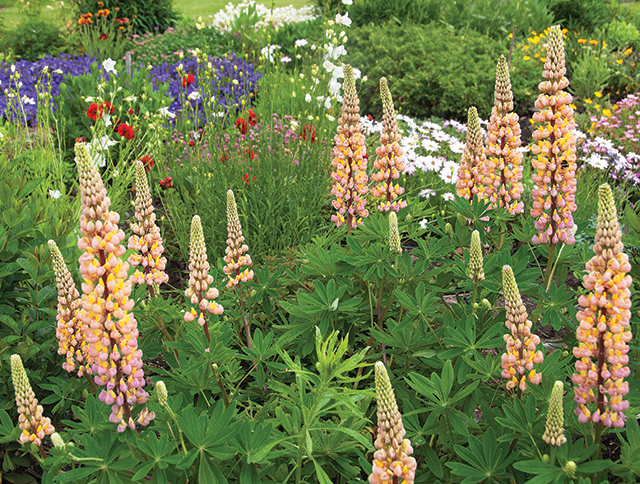 Steffie Shields recommends plants that aim high.
One of the delights of penning magazine articles is the opportunity to both stir and trawl my memory bank. A few easy mouse clicks in search of stimuli, and bingo, galleries of bygone images unfold on screen. I recall, and revel in, the striking gardens I have been fortunate to explore. Thanks to the virtual reality world, I find myself, like Alice, almost back amid carefully-crafted, bright places, seeing the light and sensing the magic. What luxury, to pause and assess once again what makes these botanical, outdoor galleries and studios so extraordinary!

Exotic or surprising plant combinations make a garden memorable, especially when encountering specimens that are giants! Last June, for instance, on a visit to Aberglasney Gardens in Wales, one joyful highlight was the chance to wander in the woods amongst lush leaves of immense Himalayan lilies, Cardiocrinum giganteum, six to eight feet tall, intermingled with white and purple-pink foxgloves.

Over the past centuries, gardeners who are mere mortals have learned not only to grow, but to control and utilise nature. They now exploit and nurture diverse plants to aesthetic effect or flavourful nutrition, especially when weaving half-hardy exotic specimens from overseas in amongst our favourite native flowers and vegetables. Taller plants are often best placed at the back of a border to dramatic and harmonious effect. In 1903 plant collector Ernest Henry Wilson introduced another ornamental lily species to our shores: the bulbous regal lily. Known also as the royal lily or king’s lily, Lilium regale is perhaps more easily available, and easy to grow to six or so feet. The stems may need staking against buffeting winds as the racemes of flowers open, strongly-scented trumpets, pure white with a yellow throat, and purple-tinged on the outside. Once, driving through Kelby, I noticed a platoon of regal lilies standing to attention in a row to screen a farmyard wall – very smart!

In his poem ‘Thyrsis’ (1866), the Victorian poet, Matthew Arnold famously described the view of Oxford from Boar’s Hill as ‘that sweet City with her dreaming spires, she needs not June for beauty’s heightening’. He had rightly observed June as the month when Nature literally lifts off and succeeds in taking us with her! In thrusting themselves upward, certain plants succeed in grabbing our attention and raise our spirits. When all in the garden is at last launched into a multi-coloured, theatrical summer show, those plants with vertical form make a marked contrast in habit to the variable profusion of rounded shrubs and roses, herbaceous clumps and mounds. Lupins add height and character, for example, and should not be confined to cottage gardens, particularly the reliable and gay Russell hybrids, such as bi-coloured Lupinus ‘Tutti-frutti’ which marries in well with cornflowers, iris and poppies. Much appreciated by bumble-bees and butterflies, but one note of caution – lupins are toxic.

Traditional spires of delphiniums and foxgloves succeed in engaging at eye level, often with bell-shaped flowers opening in sequence, one by one, as if constantly ringing chimes for summer pleasure. The former classic, staked with canes to grow straight, add more formality to the June herbaceous border, the latter more informal, with strong, hairy stems unfettered, suggesting wilder gardens, meadows and woodland edges. Just as church spires on a horizon or portico columns on a Palladian house, their architectural, erect and upright flower-spikes, add a touch of class and weighty significance to the scene. Spires of white foxgloves against a back-drop of yew, or amidst spiky green leaves make great companions to charming clusters of climbing roses and clematis.

Just when you think it’s all is over with blue, and spring’s heavenly bluebells long since died down, delphiniums begin to deliver deeper, more intense tones of axure, indigo, sapphire and cerulean. Apparently, in the meaningful language of flowers, hybrid delphiniums indicate ardent attachment. They also symbolise big-heartedness, fun, and lightness, attributes which visitors to open gardens this month will find in plenty at the Moat at Newton, opening for the National Garden Scheme on 25th June, an exemplary garden for tiered planting ideas. Here in contrast to old-fashioned pink roses, look out for white-eyed, purple-blue delphiniums, partnered with Clematis integrifolia in the same hue, but with completely different form and habit – sheer genius.

Campanulas get going towards the end of this month. If they ring your chimes, and you are thinking of starting a collection, there are over 500 varieties to the genus. An easy-to-grow and spread by self-seeding or division, the giant blue bellflower, Campanula latifolia, is a firm favourite that does not require staking. Tall stands have naturalised in several different corners, in both dappled and full shade, in our old orchard garden. Come September, when flowering is over, I simply cut the stems down to ground-level with secateurs, job done. No more maintenance is necessary, other than occasionally splitting or thinning out-sized clumps.

If in London this June, do visit the Chelsea Physic Garden. ‘Dreaming Spires’ of the tropical Echium pininana along the west-facing wall are a magnificent sight. Apparently easy to grow from seed, I somehow doubt this great Echium would survive a Lincolnshire winter, even if protected. For many centuries now, we have imported plants from all over the world, a trade that has enriched our temperate English gardens, from cottage garden to urban backyard, to historic country house parterre. I am sure we will continue to do so. As I write, the 2017 Chelsea Flower Show on the near horizon will inspire new ideas and set the latest trends for gardeners and plant enthusiasts. I wonder if, after the Brexit Poll, this year’s theme colours will be predominantly red, white and blue, or just blue?

In this beautifully, heightened month, all are more concerned about family and work prospects, than garden views. Yet gardens are great places for contemplation, having witnessed flag-waving of very political hue. Their spaces stimulate thought and can help us make the right choices, when later dutifully entering the polling booth. Let’s hope those ‘dreaming spires’ and ‘upwardly-mobile specimens’ flowering this month will enthuse optimism and drive all over the country, with a strong thread to pull together the gaudy, vibrant patchwork borders of our lives.