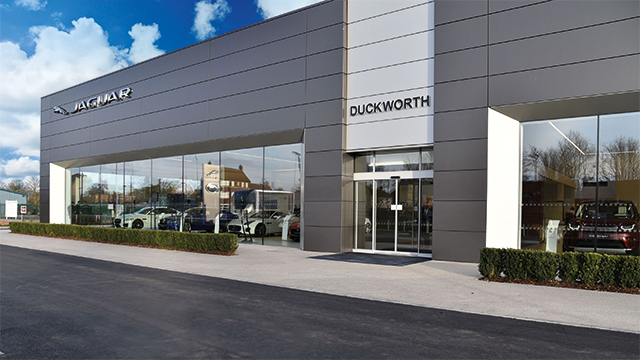 Duckworth brings Jaguar back to Boston

Around 1,000 people joined the management and staff of Martin Duckworth Ltd to celebrate the launch of the fantastic new facility, which provides a remarkable new gateway at the A16 entrance to Boston.
Customers old and new, neighbours, friends, followers on the Duckworth social media pages, and even those who heard it on the Boston grapevine, chose to come along and show their support for the Duckworth family’s investment in Boston and its surrounding area.

Directors from Jaguar Land Rover UK travelled to Boston to be part of the celebrations. The return of Jaguar to Boston proves the faith of the brand in Ben Duckworth and his team.

Managing director Ben Duckworth said: “It was really great to see that so many people wanted to be a part of this amazing new facility. Many had watched the build progress as they had driven down the A16 and were just thrilled to be able to get inside and see if the inside looked as stunning as the outside.

“We had been looking for a new home for Duckworth Land Rover in Boston for a while and Jaguar Land Rover have shown great confidence in Duckworth’s by awarding them the new Jaguar franchise for Boston, something that has been missing for the last twelve years.”

Martin Duckworth, chairman, spoke about the history of the company, which was started by his father James in 1962, moved to Market Rasen in 1980, and was joined by Ben in 2002 before the expansion into Boston in 2008 – when Martin Duckworth Ltd took over the site of the former Parkside Land Rover.

Special guest for the evening was Martin Johnson CBE, a true giant of the game, who speaks with great passion about the Land Rover brand and its associations with English Rugby. As former captain and coach of the England Rugby Union Team and having twice captained the British Lions, he is well positioned to understand the complexities and emotions of the investment of time and effort into achieving success. Scott Dicken, marketing director for Jaguar Land Rover UK had some interesting questions for Martin, who entertained the audience with his responses before mixing with the crowd to view the amazing array of historic and iconic vehicles on display in the workshop.

Andrew Shaw, head of business at the Boston site commented: “I’d like to thank the forward-thinking Duckworth family for their vision, commitment and enthusiasm for the project. We are all thrilled to be the new name for Jaguar in Lincolnshire as well as representing Land Rover.

“The new state of the art facilities; eighteen car showroom, Barista Bar, Coffee Lounge, and wi-fi ensure our customers are at the very heart of our business. The feedback we have had on the new site and the new Jaguar products has been heart-warming; the F-Pace in particular is drawing a lot of interest. It has been fantastic to see so many friendly faces, both existing and potential new customers, and I’m looking forward to introducing all the new products due out of both brands in the coming months and years, including the recently announced Range Rover Velar and Jaguar’s E-Pace and the I-Pace.

“Perhaps most importantly for the community, we have employed twenty new local people, and hope that this number will increase over the coming months.”