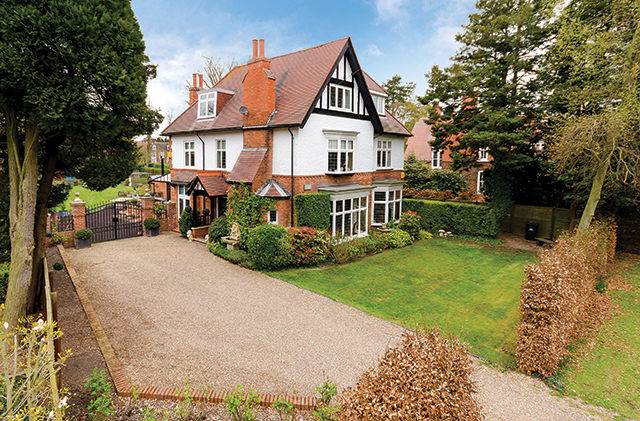 When the Davis family decided to move back to Britain after 14 years living in Perth in Western Australia, they could have settled anywhere.
But Paul and Lorraine, who are originally from Seven Oaks in Kent, shunned the busy and expensive south, choosing the peaceful village of Woodhall Spa in Lincolnshire with its tree lined avenues, good schools and enviable golf courses instead.

Paul, who works in the oil and gas industry, said: “All our family were in Kent still and we were looking for somewhere that was a good place to bring our children up and affordable.

“We did a fact finding tour a year previously, ended up in Lincoln and saw a house for sale on the High Street in Woodhall Spa. So we drove through Horncastle to see the Queen Elizabeth Grammar School and then on to Woodhall Spa.

“Just driving into the village I felt serene – with its tree lined avenues and traditional High Street, it had a nice feel to it. I could see the children growing up there and getting part-time jobs as teenagers and for me, working away from home at the time, it felt like a safe place to leave my wife and children.”

When the family returned to the UK, they rented a house in Woodhall Spa and the children – Olivia (now 24) and twins Harry and Rosie (22) – went to Queen Elizabeth Grammar School.

Then one day in June 2006, an estate agent from Robert Bell and Company told Paul about a ‘rather nice house’ that was about to go on the market.

The Edwardian detached property, Lindsey House on Alverston Avenue, had been empty for a couple of years as its owners had moved away. Although it had been on the market previously, it had been left to languish before the estate agents were approached to sell it again.

“It was empty and run down, the boiler had been condemned and the garden was a jungle but as soon as we stepped through the door, we had a good feeling about it. It was interesting and we saw it as a challenge,” said Paul.

The Davis’ got the keys in October that year but it would be another three months before they could move into their new home as a new heating and plumbing system had to be installed and the house had to be decorated throughout.

They continued to renovate and improve their new home over the next ten years with Lorraine taking on the role of project manager. The house has six bedrooms and four reception rooms over three floors and has retained many of its period features including high ceilings, deep skirting boards, picture rails and period fireplaces.

One of the first projects was to strip out the old kitchen and get Habit Kitchens from Market Stainton, near Market Rasen, to fit a bespoke design. Paul said: “The original kitchen had oak cupboards with laminate work surfaces and a gas stove. In the recess where the oven is now, there was a cupboard that smelt of sooty damp so we pulled it out before the new kitchen was installed.

“It was my wife’s decision to paint the walls a lovely deep blue colour. We used a split colour system in some of the other rooms after being inspired by the décor in the Dower House Hotel in Woodhall Spa.”

All the painted pine doors in the house were dipped and stripped to add character back into the property. Next, the bowing oak floorboards in the hallway were removed and a new red and black tiled floor was laid, and the broken original lead light windows at the front of the house were repaired by a local company.

In the drawing room, a gas fireplace with plastic marble-effect surround was replaced by an iron open fireplace and surround in keeping with the age of the house, and damaged cornicing and ceiling roses were replaced.

The ground floor carpets were taken up to reveal the original pine floorboards underneath.

“The original pine floorboards had so much character and took quite a bit of cleaning, polishing, sanding and staining. But we later decided they were too cold in winter, so we had solid oak flooring fitted,” said Paul.

Next the staircase handrail and caps were stripped and polished by a decorator. Three refurbished radiators from a company in York were installed in the hallway, downstairs toilet and the laundry room, and all the chandeliers in the house were sourced from a company in Saxilby, near Lincoln.

One of the largest bedrooms was turned into a dressing room. Paul said: “My wife employed a carpenter from Louth and with her design and his handy work, they built six bespoke double wardrobes, of which one is mine and she has the other five!”

Just a year ago, the couple decided to create a large pantry at the rear of the house.

“The house had a rear staircase over three floors and it was such a dumping ground for wellie boots and kitchen pots and pans that we couldn’t even get up the stairs,” said Paul. “Last year I had the idea to take the bottom staircase out, seal the back door up and turn the space into a massive walk-in pantry. It is a fantastic space and we can still get to the second and third floors from the top staircase.”

Over the years, the garden jungle has been tamed and is now a relaxing space with floral borders, a herb garden, raised vegetable beds and a fruit cage in which blackberries, blueberries and redcurrants are grown. A wild, overgrown pond was replaced with a formal pond with black iron surround, a patio area full of old tree stumps and paving slabs was tiled with black and red tiles and new gates and pillars to the driveway were installed.

A particular feature is the outside barbecue area which Lorraine created five years ago as a nod to their time in Australia. By lowering the pitch of the garage roof and installing beautiful old church beams into the ceiling, she created an undercover area affectionately called ‘The Outback’ which contains an open pit barbecue, gas griddle, sink and outside toilet, known as the ‘Dunny’.

The family have loved their time in the house. Paul said: “This house works really well with lots of people in it. We have accommodated eighteen friends and family for a 1940s event in the village and have totally lost them in the house, and over the years we have enjoyed garden parties, bonfire nights and Christmases with extended family staying here. It was also a great place for the children to grow up, as they had the whole of the top floor to themselves.”

Now their children have left home, the couple have decided to downsize and have placed their home on the market. Paul said: “Since the children have gone to university, the house has felt a little large for just the two of us. Although we really love our home, we feel it’s time for us to move somewhere a little smaller.”

Lindsey House in Alverston Avenue, Woodhall Spa is on the market with Robert Bell and Company for £700,000. For more information contact the estate agents on (01526) 353333.