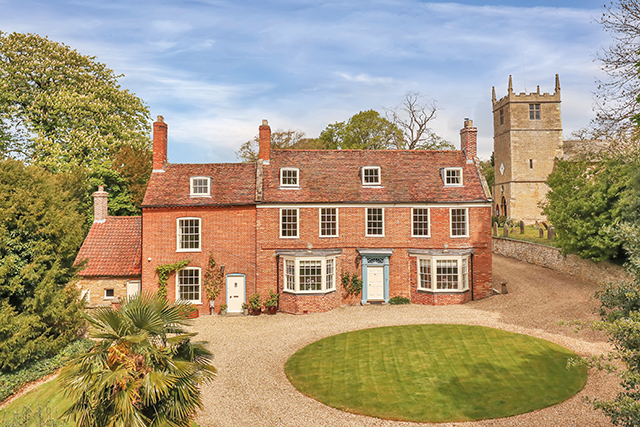 Elegant residence in a most sought after village

The Old Rectory in Burton by Lincoln offers a substantial, period, family home in stunning grounds.
The current owners, Mr and Mrs Peter Hull, have lived in The Old Rectory since December 2014 and first viewed the house on the recommendation of friends. “We had been renting in London after retirement, having spent most of our time working in Manchester and living in Cheshire,” explained Mr Hull. “On a visit to Lincoln the previous September to stay with friends, they suggested that we should view the Old Rectory which was on the market. We liked everything about the house. Its rural location; the large Georgian square rooms and the many period features. In many ways the heart ruled the head and we bought the house a few days later.”

It is not hard to understand the appeal of the house. Approached via a private gate and driveway, the front of the property faces away from Main Street, with St Vincent’s Church next door. The Old Rectory offers complete privacy without the feeling of isolation within this picturesque village.

“The main part of the house was built around 1740 although some features date back to 1640. Alterations were carried out in the Victorian period. The original road ran from Burton Hall, the home of Lord Monson. The Old Rectory faced that road which was the route the Monson family travelled to St Vincent’s Church.”

Mr and Mrs Hull are able to throw further light on the heritage of the house as a former clergyman’s home. “The last vicar who lived in the house was Rev Caulton, whose grave overlooks The Old Rectory. After his retirement the house was vacant and fell into considerable disrepair. In 1971 the house was finally sold and purchased by the son of Rev Caulton. He carried out extensive restorations to the house. Several years later he sold to the family who lived there until 2014.”

When Mr and Mrs Hull moved in it was obvious that some urgent updating of the house was required. “There were three forms of heating, oil, bottled gas and electricity. A new oil fired central heating boiler and twenty-five traditional column radiators were installed and more recently a wood burning stove in the lounge. The en-suite bathroom and family bathroom were modernised with new suites and the kitchen was replaced with a Charles Yorke bespoke oak kitchen. A window was put into the utility room with a new sink unit and the downstairs cloakroom was replaced.”

All the sash windows on the first floor had also been painted shut and the Hulls were fortunate to have been put in contact with a local joiner, Tony Jablonski, who carefully restored and in part rebuilt the windows, which are now fully functional. In addition, a door leading into the main lounge from the front hall, which had been blocked off, was re-opened and restored. Outside a conservatory was removed from the front of the house and at the back of the house the Orangery was repaired and made rainproof. In the first few months The Old Rectory was also connected to the main sewage system.

The house now offers substantial accommodation of approximately 4,000 sq ft over three floors. Modern fixtures and fittings have been sensitively combined with the character and original period features of the property. The rooms are elegantly proportioned, with high ceilings, flooded with natural light, creating versatile family and reception rooms.

The Old Rectory is set in 1.4 acres of mature grounds which include a delightful enclosed walled garden. There are views over parkland to the south as well as a former Coach House, outbuildings and separate paddock to the west of the property.

“Living in The Old Rectory initially was a challenge,” continued Mr Hull, “but as we carried out the essential renovations, we were able to relax and appreciate the privilege of living in such a unique home.

“We have loved the privacy and yet such close proximity to Lincoln, its many amenities and transport links.

“From the very beginning Burton village has been a delight to live in. There is a wonderful community here, based on St Vincent’s Church and the Burton Club. We were made very welcome and are privileged to be part of this community and are saddened that our next move is away from such a unique village.”

The Hull’s have two grown-up children. Their son lives in south London and although their daughter is currently in New Zealand, when she returns it will be to the London area. Their four grandchildren are very important to them and they would like to live closer, to enjoy spending more family time with them.

“We have made happy memories here and are confident that the next owners will appreciate this unique home and location as much as ourselves.”