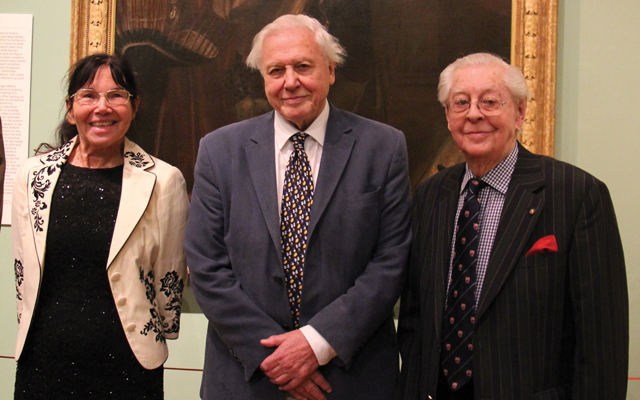 Steffie Shields recommends a visit to the Collection’s impressive exhibition in Lincoln charting Joseph Banks’s pioneering expedition to the Pacific.
Recently opening this major exhibition ‘Joseph Banks: A Great Endeavour’ the distinguished Patron of the Joseph Banks Society, Sir David Attenborough brought Banks to life almost as much as the sensational portrait of Banks by Benjamin West PRA (1772), a historical artist known as ‘the American Raphael’. The inspirational centrepiece of the show, this painting was won back from Australia only after £2 million funding was raised to bring it home to Lincolnshire. West captured the returning explorer showing off a unique, unusual flax cloak, woven on the other side of the world, surrounded by his collective spoils.

The exhibition focuses on Banks and his three-year expedition with James Cook on HM Bark Endeavour (1768–1771), financed with the King’s money together with £10,000 (today £1.5 million at least) provided by the young man from Revesby. Bringing a frisson of eighteenth-century Enlightenment to Lincoln, the exhibition gives the visitor a marvellous opportunity to compare West’s fresh-faced, twenty-nine-year-old collector with a classical bronze bust made some forty years later, by sculptor Anne Seymour Damer (1814) and a striking portrait of the veteran Banks by Sir Thomas Phillips RA (1818).

Sir David spoke, without a note, and hardly a pause for breath, in fulsome praise of Banks’s scientific work of great geo-political significance. Banks introduced a number of plants, including Eucalyptus trees, that we now grow in our gardens and conservatories. Aged only twenty-five, leading a scientific team, he travelled in style with four servants, four professional scientists – including his Swedish librarian, Dr Daniel Solander – and two dogs.

Attenborough emphasized the hard-working, assiduous collector, but also highlighted Banks’s physical bravery, enduring the perilous long voyage – plagued by storms, malnutrition and disease – and in meeting indigenous peoples who were, at times, hostile. Less than half the ship’s company survived. As natural as the world he films and loves, and one of few modern men to have experienced similar exploits, it was a rare privilege to hear him talk animatedly about his Royal Society predecessor, as if he knew Banks personally.

The television icon responsible for bringing the natural world’s glories and dramas into our front rooms wears his knowledge lightly, dropping in stories and facts in a laidback and modest manner, neatly, deflecting questions about his personal endeavours: “My own expeditions have been quite different. Banks was a besotted botanist. Plants lived in his mind for the rest of his life.” Yet, asked if Banks had been an inspiration, Sir David replied, surprisingly but honestly: “No! Now James Cook yes! He was an inspiration!”

Most lads engage with a daring, dashing Lieutenant seaman, captaining a frigate across the high seas to the unknown, more than a privileged boy, schooled at both Eton and Harrow, then Oxford University; his father a Member of Parliament, a millionaire with all the necessary society connections. Sir David’s educational path, in comparison, had been Wyggeston Grammar School for Boys in Leicester and then won a scholarship to Clare College, Cambridge.

Nevertheless, the two energetic naturalists have much in common, separated by the best part of three centuries – a love of useful science uppermost. Both were born in London, both raised in the Midlands. Gardens stimulated their curiosity about the wider world, their observations, seeds sown on fertile ground, later taking them both to the opposite ends of the globe. Sir Joseph first explored elegant, designed gardens at home in Revesby Abbey, near Horncastle, and the marshlands and pools surrounding his father’s country estate, but admitted the lanes of Eton roused his interest in botany. Sir David’s first exploratory forays, aged seven collecting for his ‘museum’, started in the Edwardian gardens of University College, Leicester where his father was principal; gardens that have since been joined together to make Leicester Botanic Garden. The young Attenborough famously sold newts to the Zoology department for 3d each from the lily-pond outside their window!

Both knights of the realm have been feted as celebrities by royalty and society. They have been great supporters of the Royal Botanic Gardens at Kew, housing some ninety per cent of all known plant species, a collection that first flourished thanks to Banks. Over the course of 2012, Sir David Attenborough’s Kingdom of Plants was filmed at Kew. Banks, the avid collector, zealously commissioned scientific research, recording and plant collecting. Passionate about the uses of plants, he helped found the Royal Horticultural Society. He filled every waking moment, penning letters, organising agricultural schemes, sharing tea shrubs with the Indians, bread fruit with the West Indies, introducing merino sheep from Spain to the Australians.

Sir David regards the Endeavour’s first voyage to the uncharted Pacific as unique in the history of mankind. Unlike Columbus or Magellan, this is the first world expedition where we still see the evidence of scientific research of strange flora and fauna, topographical drawings, and actual objects brought back. Curator, Dr Neil Chambers, director of the Banks Project at Nottingham Trent University, has brought together an imaginative sample of Banks’s ‘natural curiosities’ and earned his broad, opening-night smile. Amazingly, the story and full science of the bottle-brush shrub, for instance, has taken 200 years from discovery, to collection, to research, and to publication; and then to assemble all together in one place for the first time since they were collected.

The pictures bring it to life, done ‘on the spot’ by Alexander Buchan, the topographical artist, who died in Tahiti, and Sydney Parkinson, the natural history draughtsman, who died on the way to Cape Town. Sir David found the more primitive pictures by a Polynesian aboriginal even more moving.

Hats off to the Joseph Banks Society trustees, supported by the Heritage Lottery Fund for organising such a show-stopping exhibition. It should attract nationwide interest. An additional activity room will enthuse lively youngsters; including mapping the famous voyage’s route and stopping points across the world. Many adults will be equally entranced by a small robot that, given a latitude and longitude, moves as if by magic, to the exact location on the world map. The society is seven years young, and this exceptional educational endeavour builds on its successful walled garden project in Horncastle, filled with Banksian specimens. Mums and dads, grannies and granddads take note, and this opportunity, to visit both in the holidays.

Banks would have enjoyed Sir David Attenborough’s company. He fluttered in lightly, in an unassuming gentlemanly fashion, to praise “Banks’s huge distinction in promoting science for the benefit of mankind.” Then, like the colourful butterflies embroidered on his tie, he fluttered away, job done, with still more to do, off to film ‘Life’s Story’ in the Kalahari Desert.