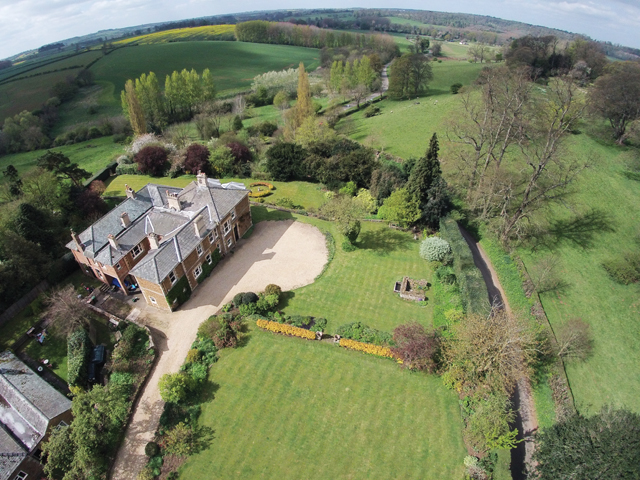 When Jeremy and Serena Bradbeer decided to move out of London and head north to the area around Grantham, a friend mentioned he knew the perfect place for them.
The magnificent Harston House, in the pretty conservation village of Harston on the edge of the Vale of Belvoir and only six miles from the commuter town of Grantham, had only just come onto the market. In fact the brochures were being printed the day the couple viewed the property in November 2003.

As soon as they stepped through the door, Jeremy and Serena fell in love with the house. Serena, who sells vintage china, glass and silverware through www.serenabradbeer.com, said: “It was a cold, grey November day and we walked round the house with poker faces as you do, but when we left we both agreed that we loved the house!

“It’s hard to quantify but despite its size, it felt very comfortable, warm and welcoming.”

The property was much larger than the three-bedroom maisonette they were leaving behind in London, but they knew immediately it would make a great family home. Serena, whose husband headhunts lawyers from his company’s office in London, said: “My husband’s family are in Northumberland and mine are in Hampshire so we wanted somewhere between the two that was quiet and rural but also within commuting distance to London.”

The couple immediately placed an offer on the house which was accepted and by April the following year, the builders had moved in to make a start on a complete makeover of the property.

Two months later, with bare floorboards, two bedrooms, only one working bathroom and a kitchen to live in, the family – the couple have two children, Charles (now 17) and Eliza (15) – moved in. “It was the hottest summer and it was a nightmare!” Serena recalled.

The family lived in their new home while the builders worked around them, rewiring, remodelling the kitchen, updating and installing the four bathrooms and redecorating throughout in a modern country house style.

Serena, who admits the entire house was decorated in ‘Germolene pink’ when they moved in, took on the redecorating project herself. She said: “It was a daunting project to have a blank canvas to work on and at first I was so overwhelmed that I was tempted to paint every room magnolia. Instead I spent hour after hour after hour smearing different coloured paint on every wall for weeks. Now each room is a different but complementary colour and I think it works well.”

The kitchen was simply remodelled with a new run of units around the original 1950s Aga. Serena said: “We had grand plans for the kitchen but have tackled other rooms ahead of it. However, it is still a great room and we often seat eight around the kitchen table for dinner then go to the sitting room next door.”

Growing up, the children used what is now the formal dining room as their playroom. “It must have been the biggest playroom in Lincolnshire,” Serena said. “But it was great because they could have train sets and a snooker table set up and nothing had to be put away at the end of the day.”

The couple had a log burner installed in the large hallway which keeps it cosy in winter. “The Victorians had huge hallways to show they could afford to waste space,” she said. “The hallway is very much the centre of the house giving it a feeling of openness and it’s a terrific asset for parties when it’s really an additional room.”

After two-and-a-half years, the house was finished with the grand drawing room, which had previously been used as a storeroom, being the last to be completed. Serena said: “The drawing room was easy to decorate as the proportions of the room make it work very well and it is formal without being overwhelming. We had new French doors installed to take advantage of the fantastic views and I particularly enjoy using the room in the summer months.”

Another favourite room for Serena is the master bedroom. Serena said: “It’s amazing to wake up every day to uninterrupted views of hills and fields for miles.”

Situated in an idyllic setting with open views across a picturesque rural valley, Harston House has entertaining space on two floors with all the principle reception rooms accessed from the entrance hallway. There is a drawing room opening onto a terrace, a study/playroom and sitting room both with bay windows, a grand twenty-six-foot dining room, kitchen/breakfast room with larder, pantry and a large boot room/utility room. There are also two separate WCs on the ground floor and a wine cellar.

The first floor has a master bedroom with en suite and dressing room and seven further bedrooms, one of which is currently set up as an office, three further bathrooms, a WC, laundry room and box room.

Outside, Harston House is approached by a gravel driveway which is flanked by manicured lawns. Several tiered lawns lead down to a garden with many specimen trees, a pond and a paddock. Also in the grounds is a detached, single storey self-contained three-bedroom cottage which the Bradbeers have totally refurbished, together with a four car garage and a range of outbuildings.

“The gardens are fantastic,” Serena said. “Both previous owners – the Countess of Yarborough and Mrs Gardiner – were keen gardeners and we have inherited a great garden which is kept in check with only a bit of care and attention.”

The house was built from local ironstone in 1877 by the Welby family as a rectory for Harston village and the nearby church. By the mid-1920s, it had become the Belvoir hunting box for the Yarborough family who were based at Brocklesby in North Lincolnshire. The Countess of Yarborough moved into the house in 1927 and at that time the south wing was added, creating a drawing room, main dining room and three double bedrooms above, and doubling the size of the house.

It was sold out of the Yarborough family in 1977 and bought by Mr and Mrs Rob Gardiner. Then in 2003, the Bradbeers became the new owners.

With the house standing on the edge of the village, the family have enjoyed being part of the community and also being involved with the church next door, of which Jeremy is the treasurer. Serena said: “The village is lovely with a strong community spirit. There are only about seventy residents but everyone is very friendly and we generally keep an eye out for each other. Every year we have a churchyard clear up which all the villagers get involved in, whether they are part of the church or not. We also have a village party every other year which has been great fun.”

The couple have also enjoyed numerous parties and family get-togethers in their home. “This is a very easy house to entertain in,” Serena said. “We have large family Christmases with around fourteen people staying and all of them getting a bed. The children have had all their birthday parties here with conjurers through to discos and everything in between!”

Now, however, the couple have decided to put the house on the market. Serena said: “We decided to sell because the children are going to leave home in the next few years and we want to bite the bullet early and downsize. We are looking for a project and would ideally like to build a house or renovate a wreck in this area.

“I have mixed emotions about leaving our home. I’m excited about going somewhere new but incredibly sad to leave a house that holds such happy memories for us.”
Harston House on Main Street, Harston, near Grantham is on the market with Savills Lincoln for £1.45million. For more information phone the estate agents on (01522) 775484.