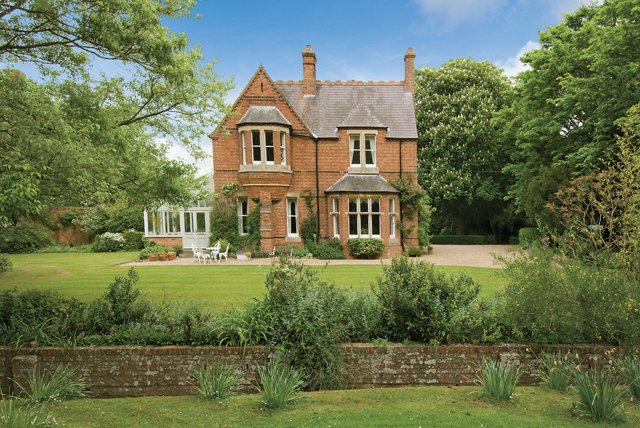 Fantastic for a family…

Nestling next to the church in the village of Hatton, Highfields Rectory has been the treasured family home of the Shaw family for the last forty years.
Janet Shaw’s husband Eric fell in love with the house as soon as he laid eyes on it. To him, it was the perfect family home, offering peace and tranquillity whilst being close enough to the city for daily commutes to the family furnishings business, G.H. Shaw on Lincoln’s High Street.

The couple brought up their four children – Wendy, David, Simon and Timothy – in the house and for years it was filled with the sound of children’s footsteps and laughter as they clambered up the stairs, climbed trees and practised cricket on the lawns.

But as the children grew into adulthood and moved away, the house fell quiet again. After Mr Shaw passed away four years ago, Mrs Shaw lived at the house with her son Timothy, but now she has decided the time is right to put the rectory on the market.

Mrs Shaw said: “I will be sad to leave the house but I’m a bit like ivy clinging to a tree. I think I’ve been here too long!”

Situated on the edge of the Lincolnshire Wolds between Wragby and Baumber, the rectory was built in 1871 and was designed by architect James Fowler, who also designed St James’ Church in Louth and St Stephen’s Church in Hatton.

In 1959, the church put the rectory on the market and it was purchased by Mr and Mrs Stammers who were ‘retired tea planters from the Colonies’. When they decided to sell the house in 1971, Mr and Mrs Shaw bought it.

Mrs Shaw can still remember the day she and her husband first saw the rectory. She said: “I remember my husband walking up the church path for the first time and saying ‘this is where I want to be’, and I followed suit.

“In those days we had a young family and fourteen miles out of Lincoln seemed quite a way but Eric loved the peaceful surroundings and tranquillity of the area and the house just grew on me.”

The rectory was attractive from the outside with mullion stone windows and a corbelled and buttressed bay window, whilst inside its five bedrooms and four reception rooms were brimming with period features such as marble and brick open fireplaces, sash windows and shutters and deep cornicing.

However it did need a little work, so the Shaws installed a new central heating system, new kitchen and bathroom and decorated throughout. Two years later they added a floodlit tennis court and the following year, they modernised the upper floor of the coach house into a flat where they threw tennis parties and birthday parties for the children.

In those early days, Mrs Shaw, a member of the Parochial Church Council of Hatton, would also hold well-attended garden fetes and coffee mornings to raise funds for the church.

Mr Shaw would commute into Lincoln each day to drop the children off at school and continue on to the family business. The company was founded in 1860 when George Horatio Shaw began selling fine furniture in addition to his usual role as a funeral director (this was usual practise in those days!).

Mrs Shaw added: “I’ve so many happy memories of this house. In 1982 Wendy was married in the church to Mark Harrison, who is a farmer from Woodhall Spa, and we had a marquee in the garden. It was a wonderful, but humid, July day and apart from some greenflies getting stuck in the veil, all went to plan!”

Mr Shaw was particularly fond of the garden and although Mrs Shaw now has a little help maintaining it, it is a testament to the couple’s dedication to the place. Well maintained and private, the gardens are brimming with well stocked flower beds and mature trees as well as expanses of neat and tidy lawns. There is a gravel drive lined with mature lime trees, parking for several cars on the drive, under a carport and in the garage.

The floodlit tennis court also has lawned gardens to the side and a gravel path in a copse which leads through to the church.

Continuing the family tradition, three of the Shaw ‘children’ now work in the family business, whilst Simon is an agronomist (a scientist concerned with field-crop production and soil). For the last ten years Mrs Shaw has worked part-time in the shop too.

Sadly Mr Shaw passed away in 2006. A keen sportsman, he was a past president of Lincoln’s Lindum Cricket Club and a member of the Woodhall Spa Golf Club where Mrs Shaw still plays and has lots of friends.

In fact, Mrs Shaw, who also has four grandchildren, is hoping to move to Woodhall Spa once the rectory is sold.

She said: “I’m hoping a family will buy the house because it was a lovely place to bring up children and grandchildren.

“Eric thought we’d live here for just ten years like the previous owners but we settled down and never left! It was where he wanted to be and now I’m hoping another family will decide it’s right for them too.”