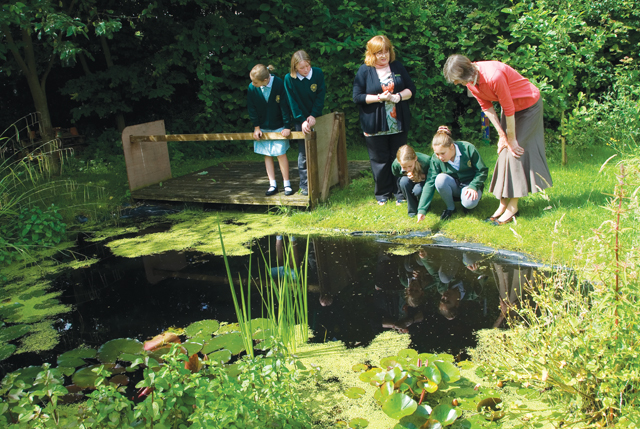 Steffie Shields’ ‘glowing’ praise for volunteers involved in restoring the county’s public parks and gardens
The dust has settled from the two, once in a lifetime, sporting sensations of 2012. The spectacle and overriding, welcoming atmosphere was generated by the cheerful involvement of all manner of volunteers. Why did they rise to the occasion? They wanted to belong; to reap the benefit of a memorable experience to tell their grandchildren; to bask in the proud satisfaction that they were involved in supporting Team GB, a lasting ‘feel good factor’. By stepping up to the voluntary plate, countless numbers helped to realise Seb Coe’s vision of inspiring an entire generation.

This year’s Charles Dickens Bicentenary celebrations coincided with our ‘Great Expectations’ from both Olympians and Paralympians in the Parallel Games (‘para’ stands for parallel not paraplegic). With futuristic sports arenas anchored in a sea of wildflowers, visitors and volunteers came away in awe of ‘natural’ designed prospects; a woven, jewelled kaleidoscope that added to their already heightened emotions and anticipations. Since Her Majesty also played her part perfectly (with her victory-rolling corgis!), it is fitting that the Olympic Park will be renamed Queen Elizabeth Park when it reopens after alteration for the Coronation Diamond Jubilee – a crowning glory in the heart of the newly invigorated East London community. One of the largest urban parks created in Europe for more than 150 years, with acres of pleasing open space planted with native species, enriching local ecology with restored wetland habitats, this urban green wonderland will be enjoyed by millions over the coming years. After the bombings of WWII and deprivation that it has suffered, this investment is long overdue for East London’s wasteland. Yet if Olympics 2012 had not been won by London, where would their green assets be?

Thank goodness an unequalled harvest of medals showered on those able to perform on the night, after several government departments and ‘Wiff Waff’ Mayor Boris drove the ambitious Olympic programme through at a phenomenal financial cost. In contrast, worryingly, there is no direct government agency overseeing and ensuring investment in the key green areas so vital to our urban communities. It’s high time politicians championed parks, which are every bit as significant as sport to health and wellbeing, especially family life. Parks energize youngsters to explore their world, expand their horizons, and connect with nature. Danny Boyle put Shakespeare’s ‘Isles of Wonder’, our romantic, oak-enriched, verdant landscape, in the heart of the Games. Then, with the second opening ceremony, came the maze and Newton’s apple orchard featuring heavily in the dazzling, thought-provoking, apple-chomping display. The athletes’ stories were mesmerizing; they delivered in spades. So can we keep that Olympic flame alight, by passing it to the sector of people who do the digging?

I enjoyed my personal ‘almost medal’ this year: ‘The Glow’, a ‘Highly Commended’ photograph in the 2012 International Garden Photographer of the Year Competition. This recognition, and the pleasure that concentrated half-hour gave me, one early magical, golden October morning, still in slippers and dressing gown, camera in hand, capturing a shaft of ethereal light in my Welby garden, are nothing compared to the warming gratification I have had since, working alongside hands-on volunteers. For instance, a unique three-year project, Heritage at Risk, masterminded for Lincolnshire Heritage Trust by project officer Matthew Godfrey, has attracted over 300 Heritage volunteer stewards, to record the condition of the county’s special buildings, walled gardens and park settings in every parish.

Last March, volunteers and schoolchildren, parents and teachers from several Grantham primary schools marked the Diamond Jubilee. The older pupils helped the younger ones, planting hundreds of snowdrop bulbs among sixty silver birch trees in the new ‘Diamond Grove’ in Queen Elizabeth Park. I will long remember their happy air of determined action and hope. They all looked forward to seeing the tiny bulbs and green shoots flourish into flower, and multiply, and enjoyed the thought that their efforts would stop passing strangers in their tracks for decades.

In June I witnessed a gardening workshop in Lincoln Cathedral cloister, part of an eight-day Church Schools Festival. Volunteer Lincolnshire Gardens Trust (LGT) members, led by ‘eco-warrior’ expert Emma Schofield, taught ten-year-old pupils to make pots with newspaper, plant red, blue and white seeds, and make plant labels by whittling sticks with a potato peeler. One thrilled lad was heard to say, “I definitely want a potato peeler for Christmas!” July found me in Heckington. Thanks to the dedicated work of teaching-assistant, Mrs Pat Mellor working extra hours at weekends, aided by volunteer parents, St Andrews Church of England Primary School had won first place, a shield and a cash prize to invest in their garden in the annual LGT School Grounds Celebration. Year Five pupils proudly showed me around the grounds including a vibrant herbaceous border, vegetable beds and an enchanting wildlife area.

More good news! Grantham’s Wyndham Park, a WWI memorial park, has recently been awarded a Green Flag for the first time. To win, parks must be welcoming, safe and well maintained, with strong involvement from the local community. Judges were influenced by the efforts of Wyndham Park Forum, volunteers working with South Kesteven District Council and by the colourful new Sensory Garden, where the centrepiece surrounding the incredible sculpture ‘Isaac’s Apple’ pays tribute to Newton’s famous discovery of gravity. (Remember that Paralympic Opening Ceremony?) In Lincoln, a regular team of volunteers who support City of Lincoln Council officers in keeping Hartsholme Country Park well maintained has won a Green Flag for the fifth year in a row, while the Arboretum has been awarded this national mark of quality for the eighth time. Now volunteers directed by Linkage Community Trust, an enabling charity which supports learning disabled people, buoyed by the success of the Joseph Banks Memorial Garden in Horncastle, are pulling together in partnership with the City to source funding to upgrade another historic park in Lincoln, Boultham Park. They plan to restore the former stable block/coaching house, converting it into an education centre, with a commercial greenhouse, café and shop. If you live nearby, you will soon witness the changes, and the benefits. So why not lend some time to help the project?

I promise you a more lasting ‘feel good factor’, if you too decide to carry the torch. I am not talking about mentoring at a sports club, laudable though that is. There are other ways of being active:

• Become a ‘Friend’ of a garden, as at Easton Walled Gardens, or join garden organisations that welcome volunteers. You will make new friends, gain skills, well-being and optimistic inner glow as you witness fresh green shoots of re-generation.

• Undertake the art of the possible, in the spirit of those amazing Paralympians. Reach for the stars and the spade and secateurs!