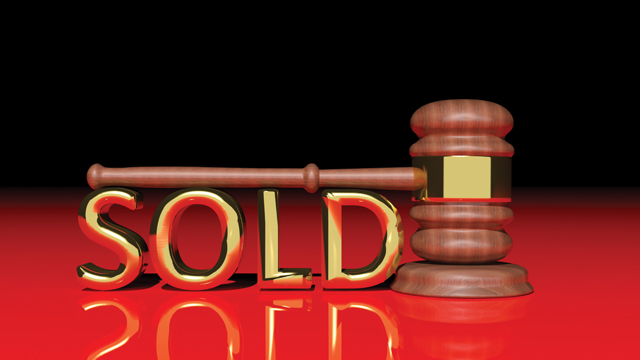 Over £200,000 was achieved during a two-part traditional catalogue sale at the Lincoln and Grantham auction rooms of Golding Young & Mawer.
The first specialist Fine Art auction of the year saw record viewings and buyer registrations to the evening event with the highlight being an oil on board by the artist Samuel John Peploe (1871-1935), of figures in front of a church which sold for £17,000.

The second part of the sale offered a treasure trove of antiques which had been discovered in the shop of well-respected antiques dealer, the late-David Smith. When Mr Smith retired in 2003, he walked away from his shop on St Mary’s Road, Manton, leaving the antiques untouched until his death ten years later.

The sale attracted large numbers of buyers to the auction rooms with over 2,000 bidders registered at the sale online and over the telephones. A record breaking fifty per cent of lots sold to online bidders.

The furniture section of the sale attracted particularly high prices with an early twentieth century oak chest making £1,300 against a pre-sale estimate of £400. A George II mahogany veneered lowboy was keenly fought for by two bidders, finally achieving £1,100 against an estimate of £200 to £400, and a George III mahogany bachelor’s chest of drawers also sold for £1,100.

Among several clocks, a George IV mahogany bracket clock by Purvis of North Audley Street, London, with a silvered dial sold for £1,800.

One of the most interesting items was an eighteenth-century journal, ‘A Private Miscellany by Terra-Filius’, in fifty parts starting from Monday, 18th July 1743 to 30th June 1744, which sold for £480. The handwritten journal, signed by Thos. Cattenden in February 1812, was inscribed with the following: ‘The contents of this book my father wrote for the entertainment of his friends. As he was gone down to the grave before I saw the light of this world whatever he has left for my perusal becomes the more interesting. I have therefore had the single sheets bound together in this volume.’