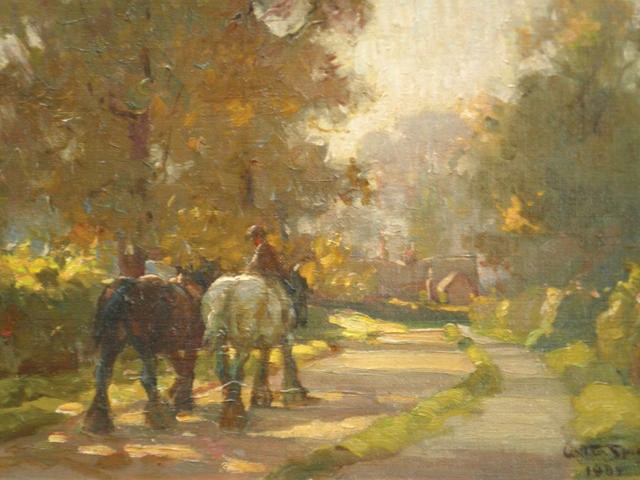 The second evening sale of nineteenth and twentieth century art at the Lincoln auction rooms has been hailed as ‘positive’ with over £60,000 worth of paintings going under the hammer.
The auction, held at Golding Young & Thos. Mawer in September, was well attended with several bids left on the telephone before the sale and many people watching the auction and bidding live, over the Internet.

Auctioneer William Gregory said: “This was a good, positive sale and showed that our Fine Art sales are going from strength to strength. There was a good spread of interest from bidders in the room, over the telephone and on the Internet with good prices achieved for our vendors.”

One of the highlights of the sale was a collection of thirteen works by the Manchester artist Harold Riley (b. 1934) which sold for over £10,000 (including commission). The highest price achieved was £3,000 for Riley’s signed oil on canvas ‘Old lady in cobbled street’ which had a pre-sale estimate of £1,500 to £2,500 and sold to a buyer in the room. Meanwhile, the mixed media ‘Figure Sleeping Rough’, dated 1965, sold for £1,950, and ‘Street scene with figure pushing a pram’, dated 1969, sold to a telephone bidder from Cheshire also for £1,950.

Elsewhere in the sale, an oil on canvas of ‘Tobit restoring sight to his father’ by the Circle of Moses Van Uyterbroeck sold to a buyer from Italy bidding on the Internet for £1,800, and an oil on canvas of the Mousehole, Cornwall, by Joshua Anderson Hague (1850-1916) sold to a telephone bidder for £1,450, well over its £800 to £1,200 estimate.

An oil on canvas of a woodland lane with figures by Robert Gallon (1845-1925) sold for £1,680 to a South Lincolnshire collector, and ‘The Kill’ – an oil on canvas depicting a huntsman, hounds and their quarry – by the nineteenth century artist John Morris sold to a buyer from Nottingham for £1,200.

Three equestrian paintings by Frances Mable Hollams (1877-1963) were bought by an American collector over the Internet for £720 each. The first oil on board depicted ‘Bay horse in stable’, while the other two ‘Bay horse in stable yard’ and ‘Amber two years’ were signed and dated 1946.

A colourful pair of watercolours titled ‘Still life with fruit’ by Arthur Dudley (fl. 1890-1907) sold to a Nottinghamshire collector for £480 and a Harry Rutherford (1903-1985) pencil sketch of a woman in the style of the Northern School sold for £420 to a Lincoln buyer, which was well above its £50 to £80 estimate.