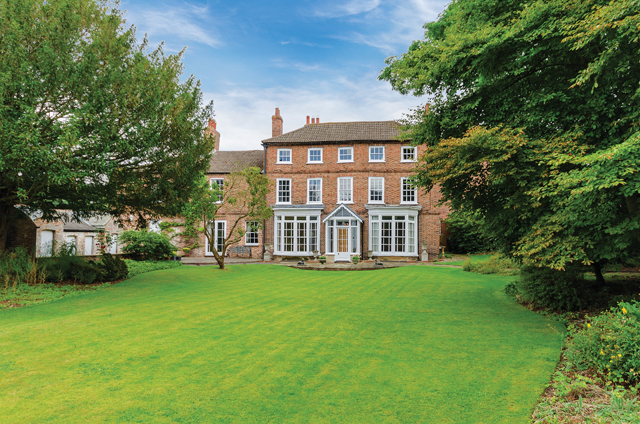 Fine town house in the heart of Horncastle

When Philip Sharpe and his wife Jean sell their lovely home in the centre of the historic market town of Horncastle, it will mark the end of half a century of living in the house.
The couple – who are well-known in the area, as Philip is chairman of the family firm Mortons of Horncastle and Jean is a director – were in their twenties and their first daughter Angela was just a few months old when they bought the Grade II listed house.

Philip said: “Jean and I were married and living in a flat in Horncastle, which we were outgrowing because our first daughter arrived, and we made a list of houses in the town that we wouldn’t mind having if they came up. This was the first one that came on the market so we bought it.

“The house was owned at the time by Nelson Butler who had Butler’s timber yard in Horncastle, which is now run by his son and grandson.

“The day we moved in was a very warm day in July and it was a lot of hard work. I remember sitting out in the garden with a packet of fish and chips and they were the best I’d ever tasted!”

The three storey house was in ‘very respectable condition’ when Philip and Jean moved in, with a large garden which spans the space between East Street and the River Waring.

Philip said: “There were other people living in the adjoining two storey house and when this came up for sale, we felt we wanted control, so we bought that and converted it into two maisonettes which we rented out for many years. Around eight to ten years later, we converted it back into one large house.

“I can’t remember doing any work to the house at the point we moved in but we did enlarge the kitchen, which was a bit small compared to the size of the house, in the early 1970s. We have done necessary maintenance throughout the years which has meant lots of new windows.”

Jean has spent many happy hours in the garden over the years with Philip taking on lawnmowing duties. Philip, who is currently a member of the Horncastle and District Lions Club and a member of the Market Rasen and District 41 Club (he was previously a president of Horncastle Rotary Club and with the Market Rasen Round Table), said: “I push the lawnmower to keep fit and Jean really enjoys being in the garden for an hour most days. It’s never been a show garden; it’s always had quite a natural look to it.

“The house is called The Rookery because if you look at old pictures of Horncastle, there are large trees which had rooks in them. We planted quite a few trees in the garden and in the summer, when the trees are in leaf you feel like you are sitting in a wood. We haven’t got any rooks yet though.”

The nine-bedroom house, which dates back to the mid-eighteenth century and is brimming with original features, sits on a plot of around 0.33 acres in the centre of Horncastle. The main part of the property has two reception rooms, a kitchen breakfast room, conservatory, boiler room and cloakroom to the ground floor with four bedrooms and a bathroom to the first floor. There are two further bedrooms to the second floor.

The northern wing of the house, which could be used as an annexe or rented as self-contained apartments, has two reception rooms, a kitchen and laundry room on the ground floor with three bedrooms, a shower room and toilet to the first floor. There is also a cellar, garage/workshop and walled garden.

When Philip and Jean first bought The Rookery, Philip was working as editor of local newspaper the Horncastle News. His late father Charles Edward Sharpe had purchased the company which owned it, WK Morton and Sons (Horncastle) Ltd when it was being wound up in 1960.

The original company was launched in 1872 when William Kirkham Morton purchased a printing company and set up business in Horncastle. As a ten-year-old child, William had been sent off to sea by his father and after being shipwrecked three times, he decided to go into business instead.

In the late 1950s, Charles Edward Sharpe, an entrepreneur and journalist who owned the Market Rasen Mail, bought the bankrupt remains of the company which included the Horncastle and Woodhall Spa News. The company is now known as Mortons of Horncastle and in 2004, the Sharpes’ daughters, Angela Spencer and Helen Harness, joined the board of directors.

Philip said: “The company was being closed down and solicitor Richard Chatterton was trying to sort it out. My father bought the company which included the Horncastle News and property in Wharf Road, Horncastle. The company is now the biggest employer in the town.

“Pop stepped back from day-to-day work at sixty-five in 1967 but he continued to write the history pages for the newspaper until he died in 1982.”

In fact The Rookery was to play a key part in the firm’s development in the early 1970s when the company was one of the first to move from hot metal letterpress printing to cold offset printing.

Philip said: “At the time the Horncastle News was in Wharf Road and there was a transitional period when we had to get all the hot metal machinery out of Wharf Road and clean it and then install phototypesetting.

“For a few weeks, we set up a complete newspaper production facility and produced the local newspapers from The Rookery. We had all the typesetter’s cold set machinery keyboards in the dining room, the proofreaders in the sitting room and my wife was serving tea through the hatch!”

After fifty years in their home, Philip and Jean have decided the time is right to downsize and so they have placed The Rookery on the market. Philip said: “We have all the memories that people have in fifty years in a house.

“We were looking through a family album at Christmas and one of our grandson’s girlfriends said, ‘The family has changed but the house has stayed the same.’ The house has been a constant factor over the years and has been part of our family for a long time.

“We have very much enjoyed living here and it has been a big decision to sell the house. I’d love to think that whoever buys the house will have a large family, contribute to Horncastle and be fond of the place.”

The Rookery on East Street, Horncastle is Sold Subject to Contract by Robert Bell and Company. For more information contact the estate agents on (01507) 522222.

In search of beauty…

Taking the plunge to swim with nature