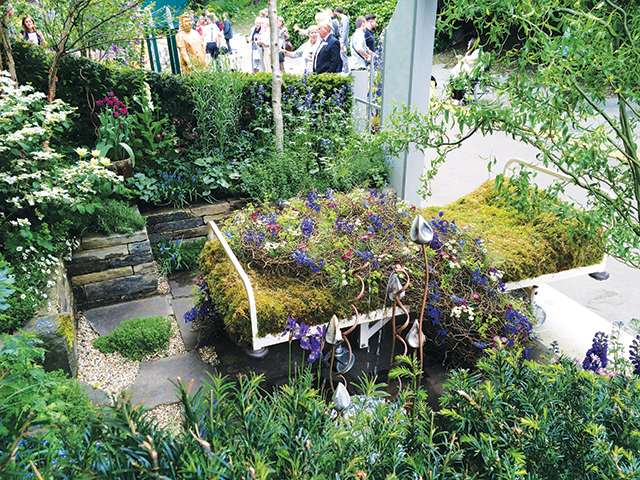 The Gold Medal winning The Garden Bed was a design which triggered many emotions as well as delighted the crowds at Chelsea Flower Show this year.
Stephen Welch, the Lincoln based chartered landscape architect, has featured previously in Lincolnshire Life, in October 2014, when he transformed the garden of the Wesley Memorial Church at Epworth. His first garden at Chelsea in May was in partnership with his longtime friend, Alison Doxey, a florist who works from The Harley Gallery near Worksop.

I was lucky enough to see The Garden Bed in London on Press Day and already it was receiving a lot of attention and admiration for its exquisite melding of floristry and landscape design skills.

“Not only was this our first attempt at a Chelsea show garden,” said Stephen, “but it was also a first for these skills to blend together in one scheme. It did raise some eyebrows but was equally recognised for its innovation.”

I met Stephen in Lincoln last month, several weeks after the show but the rollercoaster of effort and emotions was still evident as we spoke. He explained the background to their project.

“Alison and I have been friends since we were children and have followed each other’s careers. Alison trained as a Master Florist and has won a Silver Medal in the Floral Marquee in the past but it was our fiftieth birthdays which re-prompted an ambition to work collaboratively.

“Last autumn we hadn’t left ourselves much time, two days in fact, to submit the initial online proposal for a 4m x 5m Artisan Garden plot to the RHS (Royal Horticultural Society). The dilemma was how to bring our work together to impact as a greater sum of our separate skills. We began with the idea of a room setting with an open door through which the garden could come inside. The planting would have a traditional feel with twisted hazels and cottage garden flowers.”

Inspiration to expand this theme came from the work Stephen had already completed in the Channel Islands, creating a garden at Les Bourgs hospice on Guernsey, where each room overlooks and has access onto the courtyard and gardens. Patients can be wheeled outside in their beds.

“We furthered the theme by including herbs and medicinal plants, doors, windows, vases and we were lucky to locate an old style hospital bed which would be the focus of the dramatic effect of the design.”

The design was finally confirmed as having won a place in late October so Alison and Stephen made the decision to push on even though at this stage the project was self-funded; a commitment of hundreds of thousands of pounds, which is not for the faint-hearted. They could, however, look at the space they had been allocated which was sloped and tree backed.

To ensure that plants and the build would be scheduled, Frosts Landscape Construction Ltd from Milton Keynes were appointed and Alison’s sister, who is a ceramicist, was commissioned to make the pots. Yew trees were sourced from Holland and an artisan stone waller was found to build the hard landscaping. Many offers of assistance were taken up but the search for a sponsor was finally resolved after a presentation to ASDA supermarkets, who are one of the biggest retailers of healthcare products in the UK.

“I think our timing and theme just happened to be right for their business objectives and I cannot express how wonderfully committed and supportive their team have been. We were given not only sponsorship but also help with marketing and PR.”

The build itself took ten days, although three or four trial versions had previously been undertaken off site. The countdown began on Friday and one of the best pieces of advice Stephen and Alison received from a seasoned exhibitor was to have their planting in place by the following Tuesday. This gives the plants six days in the ground before the judging and they can recover from the handling and any damage will show, which can then be rectified.

Thursday and Friday prior to Chelsea week were quite calm, ready for Alison to begin her floristry on Saturday. The bed was covered by a soft mattress of moss with a rolled back ‘comfort blanket’ flowing arrangement of flowers. Each stem needed to be secured in its own water phial to keep the focal point of the garden fresh for the duration of the show.

When I visited the garden I thought the rolled back blanket also looked like a figure draped across the bed. There was the imagery of the figure melting seamlessly into natural world. Stephen confirmed that the garden had stirred strong and differing emotions in the viewing public.

“We hoped that we had created a garden which people would connect with but after the judges’ visit on the Monday morning we began to realise that it was resonating with people on a very personal level. The audience was respectful, thoughtful and in some cases totally absorbed but then they would come forward to share their experiences of cancer and hospice care.

“They recognised the experience of the hospice movement and that the bed is the centre of treatment and care for a terminally ill patient. The safety and comfort of that humanity wrapping around the patient and their family had been captured by our design.”

On Tuesday morning it was announced that The Garden Bed had been awarded a Gold Medal. Stephen confessed that the rest of the week is still a blur of filming, interviews and minimum twelve-hour days.

“We were overwhelmed by people who had seen one of our TV interviews and specifically come to see the garden. It was the emotional rather than the physical toll which was exhausting but also so rewarding. One lady, who visits the show every year, brought some delphinium petals to scatter in memory of her husband. We were very honoured that this year she chose to place them on the bed. Some people could only stand and look at the garden with tears in their eyes but many recounted how access to a garden had been so important in their own recovery or during care of a loved one.”

Both Stephen and Alison wanted to acknowledge what a tremendous team effort there was behind the project, from suppliers to relatives and friends. Their children, Alison’s husband Phil and Stephen’s sister in London all provided back-up, accommodation and kept them on an even keel.

Post-show the garden has been dismantled and plants and design elements will be distributed to four hospices in Lincolnshire, Nottinghamshire and Yorkshire: Lindsey Lodge in Scunthorpe, St John’s in Doncaster, St Gemma’s in Leeds and Bassetlaw Hospice, Worksop leaving a legacy of the garden in the hospice movement.

I lastly asked if they would be soon preparing for a submission to the scrutiny panel of the RHS for 2017. “This could easily have been the end of mine and Alison’s friendship, such is the pressure but we have always been able to communicate our ideas and frustrations. I have had my practice for twenty years now and I am pleased to say this collaboration has made that friendship even stronger. We will not be submitting a proposal for next year but at the moment we both think 2018 will be on the cards.”

Whatever their theme, I am sure it will be worth the anticipation.

TALKS ON THE GARDEN BED
Stephen and Alison are offering talks around Lincolnshire and the UK with a slideshow to groups and meetings about their experience of creating The Garden Bed. If you would like more information please contact them on: 01522 567484 or visit www.welchdesign.co.uk