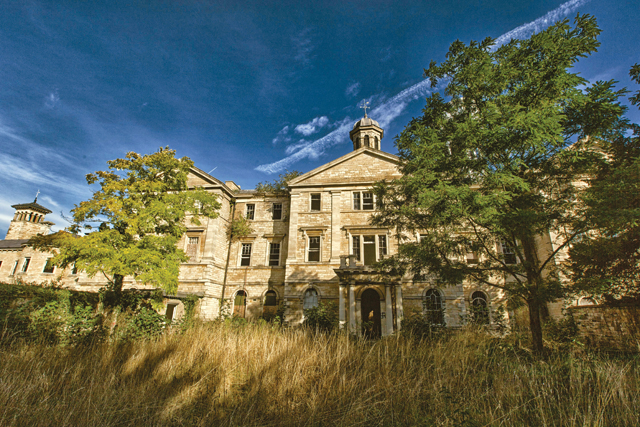 A £40 million development by Mabec developers to renovate a historic hospital site at Bracebridge Heath, south of Lincoln, into 183 luxury homes and apartments, including 77 new build family homes in the grounds of the 18-acre site, is well under way with sales off plan already completed.
Situated in the former St John’s Hospital, two miles from Lincoln, work has already started on the site, soon to be St John’s Village, bringing hundreds of new jobs to the area.

Originally a Victorian hospital built to treat people with mental illnesses and home disadvantaged families, the site has been vacant for around twenty-four years.

The project was a challenge that Mabec – headed by director Mark Elliott – had been preparing to take on for some time.

Mark said: “St John’s is an incredible site bursting with potential. The architecture is stunning and the history of the imposing buildings and surrounding grounds is extremely interesting.

“We are sympathetically renovating the existing property and building individually styled new houses to offer over 183 beautiful homes that will provide a unique living environment just outside of Lincoln.

“This kind of development is what I get really excited about – the potential of the existing site, the heritage of St John’s and being able to create such a special place for people to live in for generations to come. I’m really pleased to be able to bring St John’s back to life.”

St John’s is a limestone faced Grade II listed building and was originally built in 1852. The regeneration element offers sixty-four houses and forty-two apartments, including some that sit inside the shell of the former large theatre to the centre of the site.

Mabec is working with Lincolnshire estate agent, Pygott and Crone, to market St John’s Village over the three- to five-year project.

Tim Downing, senior partner at Pygott and Crone said: “This scheme breathes much-needed new life into the grounds, much to the delight of local residents. Bracebridge Heath is a vibrant community with many local amenities and St John’s is affectionately known by those in the local community.

“The site has a fantastic location – close to central Lincoln with access to major road links around the county and beyond and will offer a simply stunning setting for homeowners that is unlike anywhere else in the county.

“The first phase of the development – ten luxury apartments and seven new build, four-bedroom detached houses – has already been completed and we are already seeing high levels of demand to own a piece of St John’s Village.”

The Mabec team have over fifty years’ experience in property development, the last decade being dedicated to the regeneration of older buildings in the East Midlands. The development of St John’s is possibly one of the largest such regeneration projects in the country at this time.

Designed by architects Hamilton and Thomas Percy, the asylum was built at a cost of around £30,000 in 1852.

ROLLING BACK 162 YEARS OF HISTORY
St John’s, which was built in 1852, has a rich historical background. Used predominantly as a hospital, St John’s was also home to disadvantaged families who lived and worked on site.

Expanded in 1889, at its height the hospital had 944 beds available for patients, almost four times the original size.

Set over 120 acres, the development is possibly one of the largest such regeneration projects in the country at this time.

Empty for more than twenty-four years, developer Mabec is sympathetically renovating the site in line with its original age and architecture.

Many people from surrounding areas worked at the hospital or played in its sports teams and attended the St John’s Social Club.

Cllr Gill Harding-Hubbard, a member of Bracebridge Heath Parish Council, worked at St John’s as a matron maid before becoming a nurse.

She said St John’s gave her some of the best working years of her life: “I’m happy to hear St John’s is being redeveloped. I was there for twenty years between 1969 up until it closed in 1989.

“I was sixteen when I started and St John’s provided me with such happy memories – everyone was so friendly and the hospital itself was completely self-sufficient and contained.

“It has now been empty for so long and it’s been awful seeing it go to rack and ruin. It’s an amazing building that I’m fond of and is an important part of Bracebridge Heath’s history. I can’t wait to see it once the renovation work is complete.”

At least thirty acres of the land were used as a farm, which provided paid employment for many of the male patients. A good number of the female patients were employed in needlework.

Colin Shields, from Sleaford, also used to work at the hospital as a nurse between 1973 and 1981, with a short gap inbetween when he left to continue his training.

He said: “St John’s was a pleasant place to work. The staff were very supportive of one another and the patients. It was a thriving place to work and amazingly self-contained.

“After being left to ruin, now it is almost recognisable again with the regeneration work taking place and I am looking forward to seeing the end result.”

The hospital building is of an Italianate design in ‘blue’ limestone, with dressings of slate, hipped roofs and many stone stacks.

Tim Downing, senior partner at Pygott and Crone, said: “St John’s Village is an incredible building that has a fascinating story and holds a special place in the hearts of the community surrounding it.

“This development is truly unique and by building into the existing architecture, the site will offer a stunning environment to live in and we are already seeing great interest in St John’s Village from people who want to be part of that history.”

Within St John’s there are still many reminders of earlier times, including a Victorian theatre which played films from the period, and expansive recreation grounds that were used by around 1,500 residents and staff.

Mark Elliott, director at Mabec, said: “I feel honoured to be able to bring St John’s back to life, it has such a charismatic heritage and being able to create something out of what had become an abandoned building will generate such a special place for people to live in for generations to come.

“The regeneration element of the build will offer new build houses and apartments, including some that will sit inside the shell of the former large theatre to the centre of the site.”