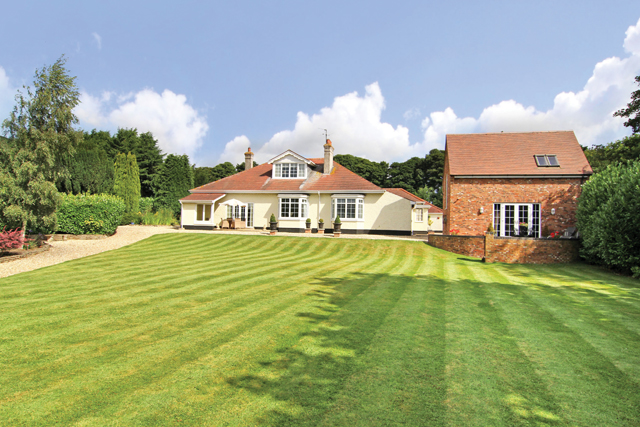 The couple own Spencer Coleman Fine Art Limited, which has premises in Exchequergate, Lincoln, and also in George Mews in the grounds of the George Hotel, in Stamford. The gallery sells international works by artists from Russia, Australia and the UK and also works by local artists. It also sells landscape paintings by Martin, who is known as ‘Spencer’, and figurative paintings and portraits by Karen. The couple also sell their prints through publishers including Artko Ltd.

Their property, Grazeley, in the village of South Elkington, near Louth, is a testament to the ten years they lived there together, combining the traditional period style of a 100-year-old building with clean, modern interiors.

Spencer has owned the property for thirty years, ever since he moved to Lincolnshire from London, attracted by cheaper house prices in the county. After a short time living in Caistor, he found Grazeley, a former parsonage built in 1913 and set in a picturesque Wolds village – parts of which date back to medieval times – in an Area of Outstanding Natural Beauty.

The property had been built for the vicar of the local church and his wife and was later bought by a surgeon, and then by Spencer. He built a chapel-style building with a mezzanine art studio reached by a spiral staircase, and a games room below.

Then in 2004, Karen took her paintings into Spencer’s Lincoln gallery and with a shared interest in art, the couple soon fell in love. When Karen moved into Grazeley, they embarked on a refurbishment programme to modernise the house.

Karen, who was previously an interior designer, said: “Spencer had been focused on his business for many years and so, by the time I moved in, the house was ready for an overhaul. We took out all the different coloured, patterned carpets and replaced them with plain carpets to unify the house; got rid of the swags and tails and replaced them with modern blinds; and decorated the walls in plain wallpaper. Then we introduced colour accents throughout, so that as you walk through the house it has continuity but each room has its own personality.”

The couple also made structural changes to the property starting with a conservatory, which Karen uses as her artist’s studio.

Karen said: “Initially, my studio was a six foot by six foot porch, which was a nightmare to work in, as my canvases are a metre squared. I would paint in the porch and every fifteen minutes would have to walk into the hallway to look at my work and then back into the cold porch again.”

Next they refurbished the guest bedroom and the guest bathroom which “hadn’t been touched since the 1960s and had frilly lace curtains and a glass door” – it now has modern tiles and a walk-in shower. The upstairs master bedroom en-suite was also modernised.

The start of the refurbishment works eight years ago coincided with the opening of a third gallery in London. Karen said: “We kept the gallery for five years but the travelling was too much and we eventually sold it to our young manager, who had started with us as a trainee.”

Once the London gallery was sold two years ago, the couple embarked on a major refurbishment programme of the kitchen, which was originally two large rooms separated by a dividing wall from a previous extension.

Karen said: “I knew exactly what I wanted to achieve and we had a few designers round but none of them twigged what I wanted. In the end, we worked directly with a local builder, Jim Fairburn from Louth, to achieve the exact look for the room.”

When the kitchen was complete, the couple made improvements to the 0.9 acre garden which was overgrown with a laurel hedge bisecting it.

“The back of the house was a forgotten space and I always had a vision of creating a courtyard garden. We had French doors installed in the kitchen, which opens onto the garden, and created reclaimed brick flowerbeds, walls and a herb garden. Then we made half a dozen seating areas around the house so we could enjoy the sun throughout the day,” said Karen.

“Our local gardener, Chris Palmer, was open to our ideas about making the garden more accessible and less overgrown. Now you can see right across the garden to the open countryside beyond.”

Described as ‘deceptively spacious and superbly appointed’ with high ceilings and a light and airy feel, the house has the majority of bedrooms on the ground floor, a master bedroom suite on the first floor, with a dressing room and large bathroom. There is also a dining room, sitting room, drawing room, study, shower room, a fitted kitchen and conservatory, and a separate detached studio building with games room which could be used as an annexe or office. Outside, there is a double garage and tennis courts.

The couple have enjoyed many happy times in the house, including parties with people spilling onto the lawn, and murder mysteries. Karen often borrows a friend’s dog, too, to take it for walks down the lane and in the countryside.

Karen added: “This is a house that has to be seen to be believed. Kirstie Allsopp has a programme, Kirstie’s Best of Both Worlds, and this house is it. It has a village feel in a lovely community surrounded by open countryside with a very short commute into Louth or into the city of Lincoln.”

Now the couple have decided to sell Grazeley so they can be nearer to their gallery in Stamford, while Spencer’s son Jordan and gallery manager Denise Christisson will be running the Lincoln gallery.
Grazeley on Church Lane, South Elkington, near Louth, is on the market with Chesterton Humberts for an asking price of £575,000. For more information, contact the estate agents on (01522) 546444.