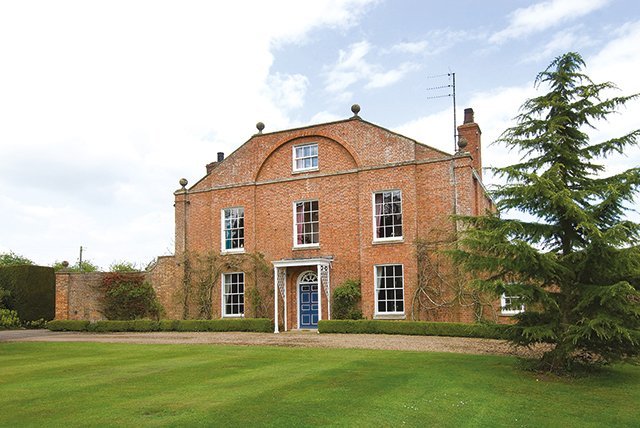 When Bill Atkin hands over the keys to Barley Cliff at East Keal, it will be the end of an era. For the Grade II listed property has been in his family for over sixty years, ever since his parents Frederick and Joy purchased the house from the church in 1946. Then, after his parents retired in 1973, Bill took the house on and has lived there ever since.
Now retired from farming, Mr Atkin and his second wife Cynthia have decided the time is right to put the six-bedroomed house, with its separate two-bedroomed cottage and four acres of land, on the market.

Mr Atkin said: “I will be sad but not sorry to leave the house. I thought it was about time to move out and downsize, after all we don’t need three floors, six bedrooms and four acres of grounds anymore.

“My father considered it was too large to manage in his retirement and I’ve always said I want to be out before it beats me. I don’t want it to be a burden to me or my family, or let it get run down as I get older. I feel it’s better to let it go to someone who wants to have it as, hopefully, a family home.”

The impressive house is mentioned in the Lincolnshire edition of Pevsner’s ‘The Buildings of England’ as a former rectory with a ‘pretty managed brick front’. It was built in 1826 on what Mr Atkin believes was the site of an existing farmhouse. He said: “The story goes that the incoming rector’s new wife considered the old rectory wasn’t good enough and wanted a new one, so she built a new front on the old farmhouse.

“The house was used as the rectory until the church decided to amalgamate the East and West Keal parishes under one rector in 1946. The incoming rector’s wife chose to live at West Keal rectory, probably because the East Keal rectory had suffered somewhat during the war as the army had used the grounds and stayed in the house.

“When the church put East Keal rectory up for sale, my father bought it. You couldn’t get a lawn mower on any piece of grass at the time because it was all nettles and chicken runs, but my father began sorting it out and we’ve been sorting it out ever since.”

Bill was just nine-years-old when he moved to the house with his parents and two sisters and has fond childhood memories of growing up there.

He said: “Barley Cliff is a wonderful place to grow up. My parents were wonderful people and all the village children would visit and we would rampage around, getting muddy in the grounds and climbing trees. I had a superb childhood here and so did my three children.”

After leaving school, Mr Atkin worked on a farm for a year before completing his National Service and then spent two years at the Royal Agricultural College in Cirencester. He then started working at a farming company in Friskney before buying land in East Keal which he then farmed. He married Sheila in 1961 and the couple had three children, Sharon who sadly died aged 24, Kathryn (45) who lives in Cambridge and Sophie (43) who lives in Irby-in-the-Marsh with her husband Simon and daughter Jennifer (13).

In 1973, when the house and gardens became too much for Mr Atkin’s parents, they moved into the adjoining two-bedroomed bungalow at the rear of the main house and Mr Atkin and his family moved into Barley Cliff.

After Mr Atkin’s mother died in 1993 and his father passed away in 1996 aged 98, Mr Atkin inherited the property.

The house has a spacious hallway from which all the principal reception rooms lead, including the drawing room, dining room, snug and breakfast/kitchen with its two pantries, utility room and access to the cellar. There is also a boot room, a conservatory which was added to the property in 1994, and wooden sash windows and working shutters throughout.

The first floor has a bathroom and a shower room, four bedrooms including one with an en-suite and another which features an area of wallpaper retained from the nursery in 1904. The second floor has two further bedrooms.

Mr Atkin said: “The house is very homely and not as large as it looks so it is ideal for family life or entertaining.”

He added: “It stands on the 200 foot contour of the Lincolnshire Wolds. My father would tell visitors from London to get onto the A16 at Peterborough and we are the first house on the right on top of the first hill you come to!

“The position on top of a hill means the house has panoramic views out to the West and South and almost right out to the Wash in the East.”

Having enjoyed such lovely views for the last sixty years it is no wonder that Mr Atkin is loathe to leave East Keal. He said: “My wife and I didn’t wish to leave the area. We looked around; I owned land as a farmer but the powers that be wouldn’t let me build anything.

“Eventually we got permission to have change of use and convert some of the outbuildings, which were once a piggery, garden shed and rubbish store, into a two-bedroomed bungalow.”

And once a new owner is found for Barley Cliff, it will be the start of another new era for this lovely family home.