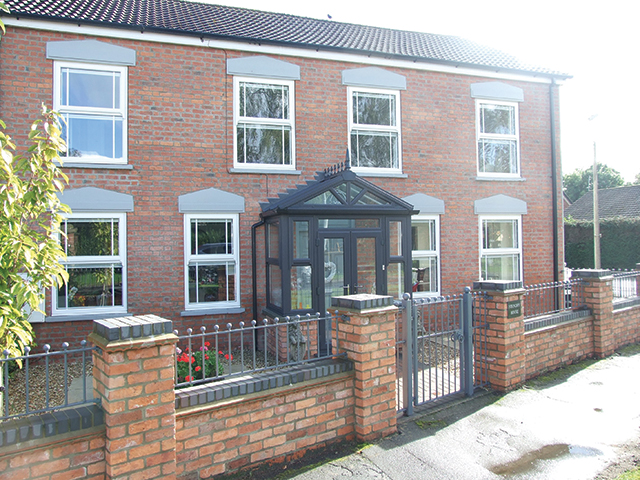 Regular visits to see a friend in a Market Rasen nursing home led Christine and Keith Borst to see the potential of a near derelict Victorian property.
Sitting in the bright, open plan living/dining room of Foundry House, it is hard to imagine the condition this property had been reduced to but a photographic record of the renovation, kept by Chris and Keith, chronicles its transformation.

“The property belonged to Waterloo House nursing home, now our next door neighbours, but had not been lived in for more than twenty years,” explained Keith. “They had used part of the ground floor as a staff room and the rest for storage. We had always thought that it was such a waste to see it deteriorating.”

The house is believed to have been built in 1861 and was called Brooklyn House for many years. Keith’s research has shown that there was a foundry at the end of the adjacent Victoria Street and the property may have been used as an ale house to quench the thirst of the foundry workers.

Externally, there is a compact front garden, edged by a low wall now topped by wrought iron railings made by local blacksmith, Ken Hurst of Thorganby. The façade has the classic symmetry of a Victorian villa with a centrally positioned front door to which Chris and Keith have added a glazed porch.

Initially the property was put up for auction by Platinum Care, the home owners, but it did not sell. Keith and Chris meanwhile had relocated to an estate property in Market Rasen but the couple have previously renovated buildings and wanted a challenge, as well as more individuality from their next home.

“We negotiated with Platinum Care to purchase the house as well as the rear access, garage and outbuildings which make up our corner plot.”

Their house sold quickly, so while the work began Chris and Keith rented nearby and project managed the renovation themselves.

Chris trained as a hairdresser but has always had a passion for interiors and design. She said: “We both knew we wanted a modern interior and I love to visit the Ideal Home Show in London to see new trends and styles. We found local inspiration at Lees Furnishers’ showrooms in Grimsby where they have plenty of contemporary furniture and accessories which we like. Most of the furniture for our open plan spaces has come from Lees.”

The central colour themes throughout the house are white and black with accents of red but there are plenty of rounded surfaces, especially in the kitchen, which soften the features of the interior. Throughout the property Chris has added eye-catching artwork and sculpture, creating a luxurious living space.

The property was already blessed with plenty of windows and removing interior walls allowed natural light to flood through the ground floor. The sitting room was altered from an oblong shape by the repositioning of a wall and installing an interior window to create the large space for the super stylish kitchen. Throughout the ground floor is tiled with underfloor electric heating.

“I was able to design the kitchen myself, with four ovens and hob, and fulfil my dream of a window seat. There is plenty of storage space including under the seat and my favourite half round, three-quarter cupboard which is so versatile and roomy. There is also the convenience of instant boiling water and a water softener which serves the whole property,” said Chris.

Leading from the kitchen towards the back of the house you move into what were the stone-built outbuildings which now house a cloakroom, laundry and Keith’s office. The space between the house and the garage has become a snug with Thermadome triple glazed skylights – a perfect spot to draw the window blinds and hunker down on a winter’s night or relax in early spring sunshine.

“This room is potentially so private it could be a used as a downstairs bedroom, quite independent from the rest of the house,” said Keith. Outside there is a patio and secure rear gates.

The first floor is accessed via a brushed steel and glass staircase and lit by a magnificent white chandelier from Elegant Lighting of Grimsby.

There are three bedrooms (one en-suite) and a family bathroom on this floor. The original doors were stripped of their paint and retained with new ironwork fittings. The light quality is equally impressive on this floor. Chris and Keith have invested in built-in blinds on all the windows, even the snug and garage, which has kept the clean lines and natural light flooding into the property. One of the bedrooms is designed for when their grandchildren stay with bunk beds and playful artwork. Keith has been able to fulfil his ambition of a walk-in shower and in the loft there is the potential for a further bedroom. “It is all boarded out and insulated but that is probably a project for the future,” said Keith.

Certainly the fact that the couple sourced and bought most the materials, project managed and worked on the renovation themselves has meant they more or less kept to their budget of £70,000. The work took about a year to complete beginning in December 2013. They were able to move in the following July and finally complete the renovation by Christmas 2014. With the property back in domestic occupation, Chris and Keith renamed their dream home Foundry House, in honour of its nearby Victorian heritage.

“It was hard work but we loved every moment seeing the transformation and making this our example of a period home with a truly twenty-first-century specification.”