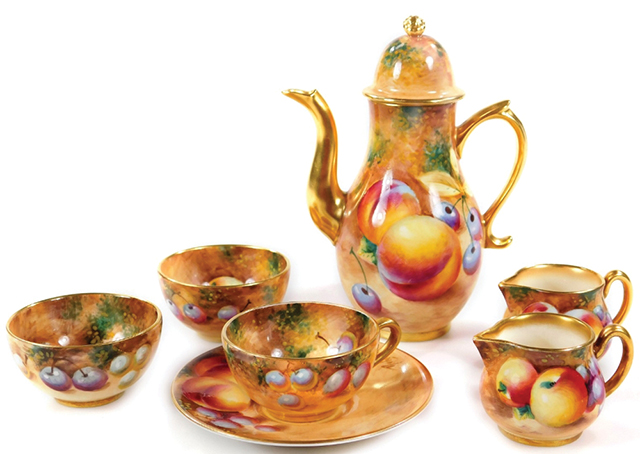 By William Gregory MRICS, Golding Young and Mawer.
The Worcester porcelain factory can be traced back to its inception in 1751, with a Royal Warrant granted in 1788 and Royal Worcester was formed in 1862. What is certain, each facet epitomised British excellence, not just in the world of ceramics but in quality control and standards of craftsmanship and desirability.

The Fruit Painters, assembled in the late 19th century, continued that tradition. They became most numerous in the early 1920s, but worked long after this and are still very much sought after by collectors throughout the world. Distance proves no barrier with big collections in Great Britain, Australia, New Zealand, North America and Europe.

The factory was able to produce a range of the highest quality bone ash porcelain items, complemented by the skilled application of autumnal and summer fruits in an almost chocolate box manner, which appealed for their honest representation of still life design on the finest porcelain in the country.

The names are household: Reginald Austin, Harry Ayrton, William Bagnall, John Freeman, William Bee, Thomas Lockyer, William Ricketts and George Moseley to name but some, all producing in a similar style, creating some of the finest representations on porcelain ever seen. Along with the Stintons and Charles Baldwyn these names were picked for their high levels of attainment at the Worcester factory and have remained standard bearers throughout the 20th century.

John Freeman was born in 1911, close to the porcelain works in Worcester. He became known as ‘the fruit machine’ not just for the high numbers of works he produced from his introduction at the tender age of 14, but for the immense quality of his talent.

Other names were just as prolific: Frank Roberts, born 1857 in the generation above Freeman, was just as talented and just as copious. His work in illustrating fruits and his ability to illustrate gilt and flowers reached an outstanding level.

The sight of the wares: all handpainted and gilt highlighted showing apples, grapes, pears, raspberries and so on – the beauty is the names are different but the quality is the same.
From a range of potpourri vases, to tea sets, bowls, vases and dishes, what you can count on is the quality of the porcelain and the calibre of the illustrator is evident to see.