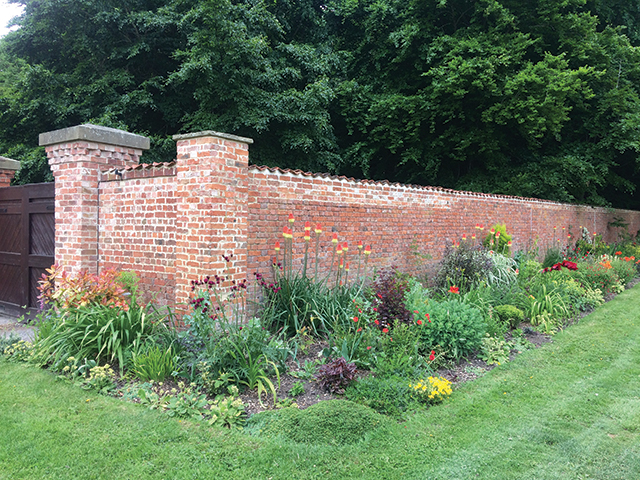 Gardeners for a new generation

A stone’s throw off the busy route from Lincoln to the coast is a magical haven – The Walled Garden at Baumber – where Sonia and David Elton are restoring and innovating in equal measure. Caroline Bingham visited on a gloriously sunny day to see their work so far.
How many times have I passed the sign and not turned in? Shamefully, too many but it is not a mistake I will be making in the future. The Walled Garden at Baumber is located within woodland at the side of the A158, on the opposite side of the road to the Minting turn.

There is the sense you are leaving the bustle of the main road and the 21st century behind as you drive down the track and deeper into the woods. The land and garden were once part of the Stourton Hall estate owned in its heyday by the Livesey family. The fate of the neo-Palladian house was similar to many former grand country houses in Lincolnshire in the middle of the last century, falling into disrepair and eventual demolition in 1955.

Sonia Elton’s grandfather was a tenant farmer on the estate and bought the land he farmed when the estate was broken up. Sonia’s father did the same several years later but further added to his holding in the early ’80s by buying the former head gardener’s cottage and the walled garden when the elderly owners wanted to retire.

Sonia’s career meanwhile, as a theatre designer, had taken her to major venues in the UK and abroad but she returned to Baumber, her birthplace, in the late ’90s, where she met and married professional photographer David. After their parents’ retirement, Sonia’s brother took over the farm, while the garden and cottage despite their condition appealed to Sonia and David.

“The walled garden has always been a magical place for me, since first coming through the gates,” explained Sonia. “It is one of only a few double walled gardens in the UK. The top of the brickwork had begun to deteriorate and the cottage was derelict but we decided to make our home here with our two boys, Henry and Eddy.”

The first task was the restoration of the cottage, which pre-dates the Victorian era, but was added to over many years, including a Victorian extension to the rear. The plan was to keep the external features as close as possible to the original appearance of the buildings but internally to create a contemporary country home. Meanwhile, the challenge of taming the garden began with mowing grass within the slips and clearing masses of brambles and self-sets which had invaded the four-acre space. In 2006, local contractor Nigel Harding was engaged to restore the walls.

“This has been a true labour of love. Nigel has worked on and off for the past decade, removing the top courses, cleaning the brick and rebuilding using lime mortar. He is on the final stretch now but to say this has been a long-term project under-estimates the scale of his achievement.”

Four years ago Sonia and David felt they had cleared the ground sufficiently to hold a charity open day and invite members of the local community to view the space. “There was no garden as such,” said David, “but we had stalls, the walls were clear of ivy and people could walk the slips, along the remains of the Hazel Walk and appreciate the micro climate created within the double skin of brick. The day was an encouraging success.”

Planting began in 2013 with Sonia designing the features and themes for specific locations within the climates of the garden. Sonia has a particular interest in tropical, less hardy varieties whereas her part-time fellow gardener, Hilary Savory, is the expert for perennials. Family and friends have been wonderfully supportive too, with Sonia’s parents and David’s father willing volunteers for weeding duties.

We set off to walk the slips, the space between the inner and outer wall. Sonia explained that the extra expense of this luxury in the nineteenth century was perhaps more about one-upmanship than it was practical gardening. There were distinct sets of nail holes in the walls where the espaliered branches of fruit trees had once been secured. The hazel walk is still mostly intact but Sonia and David have plans to replace the missing trees. Recently coppiced willow twigs were piled ready to be used for weaving or hurdles.

Around the corner, an area of mature trees has established itself within the slip. This has been retained and areas planted with woodland and shade loving species forming a meandering trail. On the other side of the wall are the remains of an old ice house which once served the Hall.

Back in full daylight we enter a lawned area with strikingly planted borders. Sonia’s experience of gardening really began four years ago but her learning curve has been immense.

She said: “I have the design experience to have a vision of what I would like to achieve. I am learning so much as I go along but local gardeners and people who visit are wonderful at not only sharing their knowledge but also sharing their plants. I have made so many new friends. We don’t charge an entrance fee but we plough any money we make from our events and the café back into the garden. I love to source the unusual and the exotic.”

The aim has not been to recreate the former Victorian themes of planting but rather to innovate for contemporary lifestyles in the garden. An excavator was needed to dig a large swimming pond which extends from a shallow beach and graduates to a two-metre depth. The margins are planted with iris, lilies, reeds and pond plants. The water is not stocked with fish but has already attracted an abundance of wildlife such as frogs, newts and jewel coloured dragonflies which were skimming across the water’s surface. There are beach huts painted in pastels where bathers can change.

This is still a family home and one corner of the garden has a wooden climbing frame which the boys seem quite happy to share with visiting children too. As they have grown older, the garden and the woods have become their playground. Sonia told me that she has a bell she rings when she wants to call them home.

The inner, west border is one of the warmest spots. Here there are many semi-hardy varieties such as palms and grasses which are thriving in these conditions. “The garden is quite level and there is about three feet of good loam before you hit the clay which underlies the land.”

There are more shepherd’s huts and hideaways positioned across the garden which are designed to be places of retreat or meditation, quiet spots for reflection for recruits from some of the courses which are now being held at The Walled Garden; these range from Tai Chi to Willow Weaving to Creative Writing. There are plans for a small exhibition of pictures too, tracing the history of the garden and the progression of the restoration.

A white garden has been planted this year and there are plans for a Japanese and bog garden in the near future. Ultimately, the Eltons would like the garden to be a self-sustaining resource which can be enjoyed by the whole community. This summer they have their first wedding within the grounds, which they hope will inspire others to hold their special day within this magical environment.

Along the north wall of the inner garden, a tropical house has been built from recycled materials. It is richly decorated with lanterns and fabrics purchased on their travels. Further along this wall, pieces of architectural salvage have been used to create a faux house exterior where summer planted window boxes and succulents thrive in the hard landscaping. David has also added baker to his portfolio of skills, as creator of the delicious cakes and teas which are offered in the café alongside.

Outside there is a plant stall, stocked with a mix of plants raised by Sonia and more unusual choices. There are gardening basics too. such as compost, tools and sundries for sale too.

“We are at the stage now where visitors come to see the most recent milestone in the journey we are making with the garden,” said David. The travel metaphor is very appropriate as David and Sonia like to take the boys off the beaten track for their holidays too. Visits to Cuba, Vietnam and this year trekking in Northern India not only open eyes to other cultures but extend the plant wish list too.

Further information regarding courses can be found on the website.

Opening times: May to September
Thursdays: 12noon to 4pm, Fridays: 11am to 4pm
Some Sundays and Bank Holidays (see website for details)