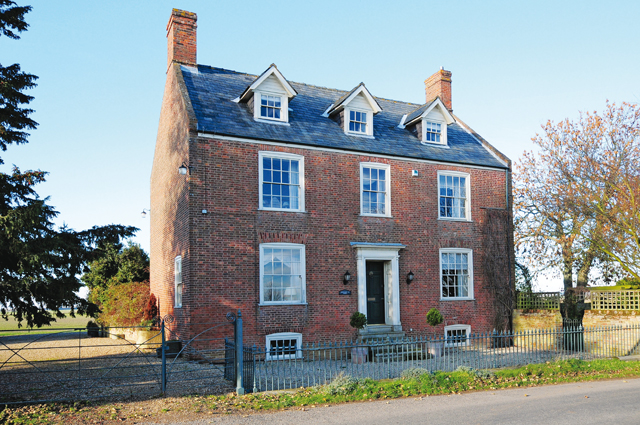 The Grade II listed Pulvertoft Hall at Gedney Broadgate, near Spalding is on the market for the first time in twenty years.
Built in 1720, the hall is a fine example of early Georgian architecture set in over two acres of land with fenland views. Arranged over four floors, the property features recently modernised bathrooms, attics converted into bedroom space and a barn with separate studio office space.

Over several years, the interior of the hall has been tastefully and lovingly restored to put back and enhance its Georgian features.

Now, however, its owners William and Lulu Fletcher have decided to place the house on the market.

William, a farmer who grows leafy salads locally, said: “It is a lovely family home and we have enjoyed many happy times here.”

William’s family have been living in the Long Sutton area for over 150 years. In fact, Pulvertoft Hall was well known to William before he purchased it twenty years ago, as he lived opposite the house on the family farm.

He said: “The hall was owned by the Drings, a farming family in Gedney, and when one of the brothers died it stood empty for ten years. Two years before I bought it, it was being done up by the new owners.

“They had done the roof, the windows, re-wiring and some of the basics, but they had also stripped out many of the Georgian interiors, like the original fireplaces, panelling and shutters. In fact, I wasn’t fully aware of how much had been removed until I bought the house.”

Two years later when William and Lulu married, the couple made Pulvertoft Hall their home and replaced many beautiful original features which had been removed by the previous owners.

Lulu, who has run Lulu Carter Design for over twenty-five years, has specialised in renovating period properties and thus has a large team of professional and brilliant craftsmen who worked on the house.

She said: “In particular we found an early colour scheme for the Hall by scraping back the layers of wallpaper – a beautiful deep green paint finish emerged with a stencil in black which we copied. We dated it to approximately 1810. In addition, we restored the original brass stair runners for the rather spectacular staircase that is now the only staircase in the property.”

For those who appreciate period style, the house is a paradise brimming with original features such as sash windows, wood panelling, six-panel doors, fireplaces and detailed cornicing, most of which were reintroduced by the Fletchers.

Stone steps with carriage lights to each side lead to the imposing panelled front door with a lion’s head brass knocker, which opens into the main hall. The drawing room with its large window overlooking the front of the house is ideal for entertaining and the sitting room is cosy with its dog-grate fire with unique carved wood surround. A large farmhouse style kitchen overlooks the side terrace.

On the first floor, an elegant original staircase with solid wood banister leads to a half-landing, with a tall window overlooking the garden which is flanked by decorative Georgian columns from Buckminster Hall.

William explained: “Buckminster Hall was demolished after the war and my father went to the sale in the 1950s and bought, among other things, some Georgian columns that were inside the house. They had been on the farm for many years until we installed them in the hall.”

The master bedroom has striking wood panelling along one wall incorporating a cast iron period fireplace, with solid wood surround and sash windows with views of open countryside. An equally large guest bedroom could also be used as the master bedroom as it has identical features and layout.

There is a family bathroom on the first floor and a door from the landing leads to a dressing room which has floor to ceiling wardrobes and views of the garden. The third bedroom has an en suite and a small snug and the fourth bedroom has dual aspect windows.

On the second floor, there is a spacious room with a vaulted ceiling, exposed roof beams and a dormer window which would make an ideal playroom or teenage den. There are a further two bedrooms on this floor and another bathroom. Extensive cellars run under the front part of the house, one of which has been converted into a study and another into a wine cellar.

Outside, the property is fronted by original iron railings and approached via a gravelled drive with plenty of parking. There is a walled garden to the side of the house, a separate barn at the rear and the gardens are enclosed on all sides by a brick wall and edged with mature trees and shrubs.

The walled garden is laid to lawn and has a large pergola trained with flowering roses and jasmine; outside the back door of the property, a paved terrace has raised beds stocked with mature shrubs and a sheltered outside seating area.

A brick-built two-storey barn next to the main house has been converted into a very stylish home office and showroom, with glass entrance doors screened by solid wood barn doors. The showroom has stone-flagged floors, exposed roof beams, a fireplace and a wide sash window overlooking the drive.

William said: “The work on the house was ongoing but about ten years ago Lulu converted the barn, for offices for her expanding business. Once again there is a fine example here of decorative painting and trompe l’oeil work, as the ground floor has been stone blocked on the walls and a Stubbs like monkey overlooks a doorway!

“We also restored the Georgian railings at the front of the house, recreated a walled garden and a terrace.”

He added: “The sitting room is a favourite place in the winter months because it is warm with a lovely log fire and in the summer, the drawing room is a very light and airy room with windows on three sides.”

• Pulvertoft Hall at Gedney Broadgate, near Spalding is on the market with Fine and Country Stamford for £599,000. For more information phone the estate agents on (01780) 750200.