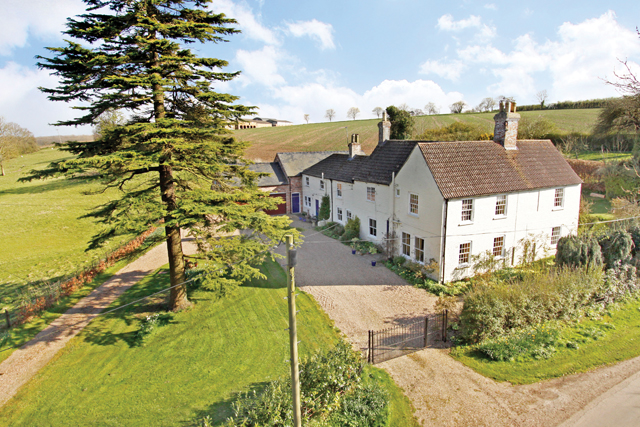 When Nigel Howells and his wife Christine decided to move to Lincolnshire nine years ago, the responsibility of finding a new home fell on Nigel’s shoulders.
As Christine had been poorly for a number of years, Nigel had to do the viewings himself. But stepping through the doors of Claxby Manor in the small hamlet of Claxby St Andrew in the Lincolnshire Wolds, he immediately knew that with a few changes it could be the perfect family home.

Nigel, who was chief executive of East Lindsey District Council from 2006 until he retired due to ill health in 2012, said: “I liked the location in a quiet valley with fields all around but not far from great walks, local beaches and towns. It was an old house in reasonably good condition with large rooms – we both liked old houses – and there was plenty of space for our children and their potentially growing families to visit.”

At the time, the couple lived in Kent, where Nigel ran a primary care trust. Their grown-up daughters Lindsey and Joanna had already left home.

They immediately made an offer on Claxby Manor which was accepted and they moved in March 2006. The Georgian manor house is in an idyllic location, nestled in a valley overlooking open countryside, and just three miles from the market town of Alford in an Area of Outstanding Natural Beauty.

It is believed that the property was originally a farmhouse built in the late Georgian to early Victorian period and that it was linked to the farm buildings up the hill, as a track used to run across the front of the house to the buildings. The house has been extended over the last 200 years and the adjacent coach house was converted in the 1980s.

As soon as they moved in, Nigel and Christine started making the house their own. First they installed new bathrooms and a new traditional-style kitchen from local company, Habit Kitchens.

“Christine did a lot of research on the Internet to find the style of kitchen we liked,” said Nigel. “Lots of companies offered kitchens but we chose one which would source electricians and plumbers to complete the work as well.”

Then they updated the kitchen and bathroom in the adjacent two-bedroomed annexe which is now home to Christine’s mother, Jean Armstrong. The former coach house had been used as a holiday let by the previous owners.

“Jean moved in four or five years ago,” said Nigel. “It means she can be independent with her own front door but there is also an interconnecting door to the main house, so we can be there to support her if she needs us.”

Next they applied for planning permission to build a therapy pool for Christine, to help her mobility; to demolish a double garage and build a larger one in its place and create an orangery.

“The therapy pool needs to be hotter than a normal pool, with a state-of-the-art heat recovery system to aid my wife’s mobility,” Nigel explained. “Since it was built in 2008, she has used it daily.”

When the building work was complete, the couple created a terrace and walled courtyard with fish pond at the back of the house. “It’s south facing and really sheltered and warm out there,” said Nigel.

The gardens feature another wildlife pond and attract lots of creatures, including a heron and rare owl in the summer months. The orchard, which was partly planted before the couple bought the house, gives an abundance of fruit including apples, pears and plums. “We have become adept at preserving fruit now,” said Nigel.

When they bought the house it was painted throughout in a grey colour, so over the years they have redecorated in lighter, neutral tones. Now their favourite room is the orangery.

Nigel said: “We spend a lot of time in there as it is warm, even in the winter months.”

Over the years the house has been a great place to entertain family and friends. “We had my mother-in-law’s 85th birthday here with all the family, and also my brother-in-law’s 60th birthday party,” said Nigel.

He added: “The house is in a great location for walks, as Claxby Chalk Pit, which is a nature reserve run by the Lincolnshire Wildlife Trust, is a two-minute walk away and the house is on the Sustrans Millennium Cycle Route. It is also only a fifteen-minute drive to the quiet beaches of Huttoft, or if we want somewhere noisier we head to Mablethorpe with its beach huts.”

Now, however, the couple have decided to move to Hertfordshire to live closer to Lindsey, her husband Andrew and their fifteen-month-old daughter Megan.

“We want to move nearer to our daughter to be able to help out with Megan,” said Nigel. “It’s currently a three-hour drive which makes it difficult so we’ve reluctantly decided to sell our home and move closer.”

The new owner will certainly be in for a treat as the property has four reception rooms, a breakfast room, kitchen, conservatory, indoor heated swimming pool, four bedrooms and three bath/shower rooms. It has also retained much of its original character including sash windows, panelled doors, period fireplaces and high ceilings.

There is also a two-bedroomed self-contained annexe as well as around 0.62 acres of landscaped gardens with extensive parking and a garage with double electric doors.

Once they have moved, Christine hopes to pursue postgraduate studies, whilst Nigel, who is now the official house cook, intends to continue his interest in cookery as well as pottering in the garden and reading.

“We hope whoever buys the house will have the same love of old houses as we do and that they will make the most of it,” said Nigel.