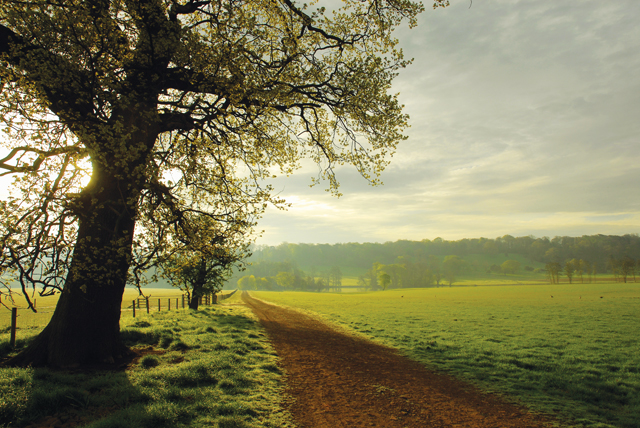 Steffie Shields discusses the relevance of ‘Capability’ Brown (1716–1783) for today’s gardeners, farmers and foresters.
Do you remember how Danny Boyle introduced the 2012 Olympics Opening Ceremony with an oak tree on one verdant hill? He showed the whole world that landscape is at the heart of our national psyche.

Some believe that ‘Capability’ Brown inspired “the only golden moments of landscape”. Considering his approaching tercentenary, the Heritage Lottery Fund (HLF) recently awarded £911,000 to the first ever national Festival celebrating the ’father of landscape architecture’. An unprecedented number of heritage and garden organisations, in partnership with landowners, are busy planning events, concerts and exhibitions throughout the country. The idea is to train volunteers to act as guides for many more to ‘walk the ground’ and enjoy exploring his landscapes, including some private estates not normally open to the public.

People will be surprised to learn how many oak-rich, Brown-improved sites survive with an engaging ‘sense of place’. Here, both on the edges and in the heart of Lincolnshire, his works number Burghley and Grimsthorpe Castle in the south, Belvoir Castle west, Hainton east of Lincoln and Brocklesby in the north. Together, Lincolnshire Gardens Trust and local NADFAS members hope to volunteer to support various open days.

Christened Lancelot Brown in August 1716, his was a modest farming family in Kirkharle, a rural hamlet in Northumberland. Brown was afflicted with asthma. In his day, a career ‘out of doors’ was considered medically advisable, so he trained on the local estate, tackling a range of projects from hedge-laying to drainage works. Ambitious and ‘canny’, aged twenty-three Brown headed south, attracted by an Act of Parliament calling for engineers for Lincolnshire fen navigation schemes. He progressed to Grimsthorpe Castle to supervise hydraulic improvements centred at springs near the old Vaudey Abbey, his rent at Witham on the Hill manor paid for by the Duke of Ancaster. Brown also met his future wife Bridget Wayet, the daughter of a Boston apothecary.

The 1740s saw several years of devastating drought. Brown spent ten years at Stowe in Buckinghamshire as Viscount Cobham’s steward/head gardener with a team of forty men in one of the finest landscape gardens, besides addressing water issues for neighbouring landowners. The following decade saw unprecedented rainfall and increased demand for his services. Brown established an independent professional architectural, engineering and land improvement practice, based in Hammersmith, a centre for market gardens and nurseries on London’s outskirts. The famous nickname stems from being called in to solve problems, survey ‘capabilities’ and suggest estate improvements. Inspired by Vanbrugh, William Kent and, in particular, Stephen Switzer who wrote about ‘mixing the useful and profitable parts of Gard’ning with the Pleasurable’, Brown caused a sea change in the way landowners organised their domains. Clients, facing several years of disruption, were persuaded that serious investment in hydraulic schemes and plantations would bring huge benefits and increased income from grazing and forestry.

The county’s agricultural improvers influenced Brown’s methods. They had long managed organised flooding of water meadows, ‘floating’ irrigation, usually early in the year. By maintaining a constant flow of water, they fertilised fields, reduced the effects of frost and gained both an early growth of grass and a further hay crop later on. Here he was known as ‘Mr Brown Engineer’ undertaking experiments to trial the latest horse or steam engines to pump ‘soft, clear and well-tasting’ water to the house. He directed specialist ‘water men’ or ‘pudlers’ to enlarge fish ponds dating from medieval times, to connect trout streams, canals, catchments and mill leats. Once a year, he advised a contrived rise in the lake level to flush out house drains and ensured that contaminated waste water from offices, laundries and brewhouses drained into lakes and through purifying water meadows. Initial recommendations often included a brewhouse, as at Burghley, to keep labourers healthy. No wonder Brown inspired great loyalty!

Trenching marshland systematically to reclaim land, Brown was not the first, nor the only, improver to create mirrored lakes. His eye for line, scale and variety outclassed all others. Awe-inspiring acres of open water introducing space and shimmering light contrasted with narrow, secluded and tree-lined channels at lake-ends serving as decoys, to attract plentiful wild fowl for both sport and table. His innovative ‘necklace’ of linked lakes at undetectably different levels across the territory eased reservoir management and repair. Cascades controlled flow, disguised changes in level and allowed silt to be deposited. Healthy waters with increased oxygen supply made for better fish stocks. Imagine the mesmerising effect, the gratifying illusion of one continuous ‘river’ at Burghley on the people of eighteenth century Stamford who, every Sunday, were free to walk in the park.

Unequivocal, concise directions survive in memoranda written down by attentive stewards. Burton Constable in East Yorkshire was transformed from: ‘…‘Wilderness’ with swamps, gorse and whin higher than a man on horseback, deep ridge and furrow… Now all is removed and at great Expense.’ Each return visit, every six months or so, to ‘correct every thing that was wrong’ generated further work for the men his business relied on.

‘Three things must be attended to, Space, Cleaness & Shelter.’ Brown preferred to stake out each snaking road, winding path, lake edge, shrubbery or tree plantation. He recycled resources such as wrought-iron gates, stone and building materials, and encouraged planting gorse as fodder and as insulation for underground water pipes.

Surveyed from the front steps of the house or from reception room windows, Brown’s calming expanse of grass and clover lawn, encircled by a discreet brick or stone ha-ha, made one delightful and novel sweep down to the lake, sometimes to the far horizon. Evergreen clover, Trifolium repens, is drought-tolerant, competes well against weeds, providing high-energy palatable fodder. Grazing sheep or deer in the close environs of the house became a common sight, or else mowers kept grass neat by swinging their sharp scythes rhythmically, when still damp from early morning dew, before raking it off. Often the whole household assisted the gather.

Mowing and haymaking for winter fodder for larger numbers of horses became a social event, the teamwork divided between villagers of all ages. As fast as the indefatigable ‘Mr Brown’ was expanding prospects with modern techniques, both the farming economy and livestock health improved. No longer scratching around on common land, cattle, sheep and deer fattened on better pastures, while arable farming continued on the outer fringes of the park.

‘Take away many of the Ash trees out of the Clumps and plant better kinds in their room – such as Oak, Elm, Larch, Beech etc… Cut up several of the tall Ashes abt 6 inches from the Ground & let them spring again.’

Brown designed walled gardens or ‘vegetable manufacturies’, including at Brocklesby, Burghley, and Hainton, and instigated the latest fruit-growing techniques. Focused on every agricultural, arboreal and horticultural capability, Brown never published comprehensive designs, but his perfectionist mantra was likely often, and ubiquitously, repeated: ‘Keep all in view very neat.’

An intelligent, upright and direct man of integrity and wit, Brown proved to be an effective, charismatic leader. Driven to secure better quality of life for all, estate workers included, Brown’s conversation was by some accounts obsessively agricultural. Prime Minister William Pitt, blue-stocking Elizabeth Montagu and Shakespearean actor David Garrick numbered amongst admiring friends. In times of great concern regarding war against France, and later in America, Brown introduced greater security. Everyone found diversion in appreciating harmony and beauty in Nature.

The Hanoverian king, George III, shared his passion for science and farming. An early example of social mobility, Brown rose to unparalleled acclaim in his lifetime, undertaking royal duties from 1764 until his death in 1783, owning a manor estate in Fenstanton, Huntingdonshire, where he lies buried, and also land in Lincolnshire – a self-made millionaire by today’s standards.

‘Capability’ Brown has been called the ‘Shakespeare of Gardening Arts’. As his Tercentenary Festival unfolds, there will be opportunities to examine his surviving veteran trees and artistry in levelling and theatrical scene-setting. Just as Shakespeare’s plays are reinterpreted, long may Brown’s coherent, ‘easy to read’ designs be conserved, revitalised and enjoyed. ‘Capability’ Brown’s still relevant, accessible and sustainable landscapes, if treasured, will continue to play a key role in the well-being of communities and overseas visitors for yet more centuries, masterstrokes in the sporting and cultural life of the country.