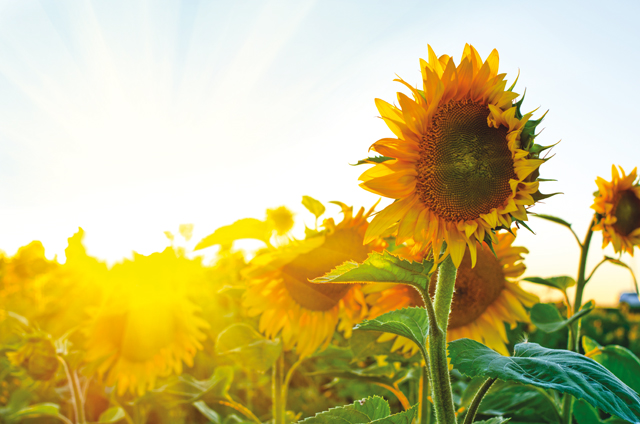 Growing your own sunshine

If there is one flower guaranteed to make us smile, it is the sunflower. This year’s weather – a particularly hard winter, followed by a rainy, damp-squib spring – has caused sunshine to be a bit of an obsession.
We all need out-of-doors quality time, in terms of body, and also soul, chemistry. Helianthus, the correct scientific name, comes from the Greek words ‘Helia’ (sun) and ‘Anthus’ (flower), bright yellow discs with rays of petals. More than sixty varieties of sunflower in the Helianthus genus light up our lives; many are perennial, and dwarf varieties with varying shades of russets, oranges and chocolate browns are increasing in popularity. Wild sunflowers are highly branched with small heads and small seeds. In contrast, the hybrid single-stem domesticated sunflower has large, good-natured seed heads, up to a foot (or 30cms) in diameter. You cannot fail to notice that they respond to and follow the direction of the sun.

The sunflower, native to North America, was used by the American Indians for food. The flowers inspired the Incas to create images of their sun gods. By the early sixteenth century, sailing explorers brought such gold images of the flower, as well as the seeds, back to Europe. Nowadays farmers use sunflowers to feed livestock. Helianthus annuus, originating from the sunshine state of Florida is grown commercially in countries such as France. Would you believe that an artichoke, Helianthus tuberosus, is also a sunflower? Sunflower seeds are versatile, with lots of calcium and eleven other important minerals – excellent in baked goods, cereals and sweets. They are fifty per cent fat, mostly polyunsaturated. There are two kinds of sunflower seeds – black and striped. Cooking oil is made from black seeds; striped seeds make a healthy snack, roasted or raw. Sunflowers are a great food for birds too, so it is well worth saving the seed to attract birds to your garden in winter months. Here in Lincolnshire, you see them grown in fields as a game crop. Since the sunflower is the national flower of Russia, perhaps it is no surprise to read that this vast country grows the most.

Forget sophistication and fashionable garden style, the latest ‘in’ plant or colour hue. Every garden and school ground, every patch where children come to play and explore our world should have an open, sunny corner for sunflowers. One of the most exciting, fastest growing plants – from three to eighteen feet tall, given rich soil – sunflowers can grow eight to twelve feet tall within six months and grow best in full sun in fertile, moist, well-drained soil with a lot of mulch. According to an early American writer, Caroline Gilman (1794–1888), ‘God to his humblest creatures room has given, and space to be… Space for the sunflower, bright with yellow glow, to court the sky.’

1888 is when the celebrated artist Vincent Van Gogh created his famous ‘Sunflowers’, one of the most popular paintings in the National Gallery. He made eleven paintings of sunflowers, but evidently this is the one of which he was most proud. Sunflowers were special emblems of happiness to Van Gogh; significantly at a time when he was at his happiest, experimenting with bright, unmixed colours and trying to impress his hero, Gauguin, in a gesture of friendship. In Dutch literature, the sunflower is a symbol of devotion and loyalty. It seems appropriate, therefore, that in 1986 the tallest sunflower recorded, according to Google, was grown by a Dutchman, reaching 25 feet 5.5 inches tall, or 7.76 metres. However, as of last year, on 4th September 2012, the world’s tallest sunflower was measured and recorded in the Guinness Book of Records as 8.23 metres (27ft) tall, in Kaarst, Germany.

August is when sunflowers really start to show off and demand attention; so much so, they bring out the competitive streak in those who like to grow big things, not just potatoes or pumpkins. Last year, our village pub handed out sunflowers seeds and offered the age-old challenge and a prize for the tallest. Well, my first batch failed to germinate – not a great start. Thankfully, to reach maturity, they require only about ninety to 100 days, so I tried again. By the time they came to flower, they made a gay backdrop to my granddaughter’s August christening celebration, the last happy family occasion which my intrepid ninety-three-year-old mother-in-law was able to attend. In their various stages, flowers remind us of the natural cycle of life and death, and help us begin to make sense of our ever-evolving planet.

On ‘good light’ days last summer, when I progressed around my patch, with camera in hand, looking for both ‘hot’ photographs and ‘cool’ design, I began to study the growth, and enjoy the gradual transformation of my sunflowers, the downy hairiness to the leaves and sepals. They can look stunning backlit, capturing iridescent light. Attractive, sharp yellow, large petals around the edge are individual ray flowers which do not develop into seed. Who knew that their heads actually consist of 1,000 to 2,000 individual flowers joined together by a receptacle base? I did not. No wonder bees love them! It follows that one sunflower head can have up to 2,000 seeds. These are arranged in such a precise pattern, equivalent to one of nature’s best mathematical phenomenons, called the Fibonacci spiral, Fibonacci series or sequence. This arrangement forming the optimal packing of the seeds, some spiralling right, some spiralling left, is frankly awesome.

So I recommend giving away some packets of happiness in your Christmas stockings, and remember to sow some sunflower seeds next spring, especially if your garden is anything like mine. August can be an interim, drab period which needs a striking visual lift of yellow and gold against blue skies. Plan ahead and, whatever the weather, grow your own sunshine!