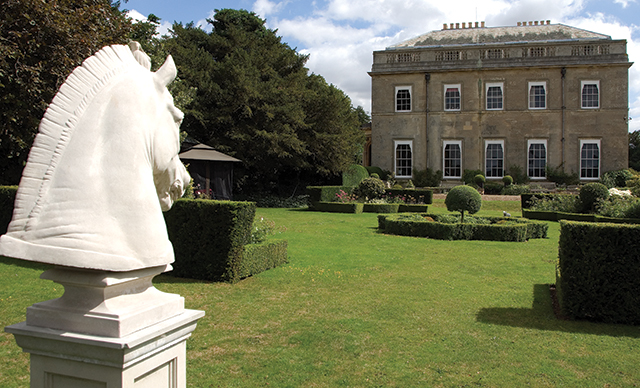 Steffie Shields meets a dedicated gardener tending heritage gardens updated with Bunny Guinness’s designs for the twenty-first century
Hackthorn Hall is tucked away in forty hectares of parkland, north of Lincoln, a mile from Ermine Street, since 1613, a corner of Cracroft family history. I had agreed to meet Keith Donner, Hackthorn’s Head Gardener, at the stables courtyard near the church. Early, for once, I had time to admire a couple of wall planters, cascading with a rainbow assortment of annuals, like floral wall tapestries. Soon Keith came towards me, proffering another rainbow, an armful of five-foot gladioli that Dame Edna would lust after – lime green, coral, red-tinged yellow and bright purple. What a welcome!

We headed first in the direction of the nerve centre, the nineteenth-century walled kitchen garden that slopes south almost a quarter of a mile east, linked to the Hall by ‘The Lady Walk‘, winding through dappled woods. Often sacrificing leisure time after work, he happily devotes long, solitary hours here. Rather than directing a team, as his Victorian predecessors, this Dunholme born and bred, Riseholme College apprentice-trained gardener single-handedly sows and grows a plethora of tasty produce for William and Maggie Cracroft-Eley’s family and visitors. But, his love of flowers, apparent from the first hello, also provides a feast for the eyes.

Stepping into the one-acre walled garden, I was confronted with another world, a great, dazzling swathe of vibrant flowers, bathed in early morning sunshine, edged by clouds of blue lavender. The place is alive with insects, bumble bees, butterflies and even the odd humming bird moth flitting around. Keith enjoys a cutting garden, and an absorption in growing chrysanthemums for what he calls “pure interest”. He derives great satisfaction at being able to provide the household with cut flowers every month of the year. Goodness knows how he manages to find the time, let alone the patience, to de-bud rows of chrysanthemums, tie in sweet peas, stake armies of dahlias and dead-head them, let alone candy-coloured zinnias, and golden rudbeckias. The dahlias are started off in pots in a cold greenhouse in March, before planting outside in June so as to prolong the season. He is not afraid to resurrect old-fashioned drought tolerant, hardy perennials, such as fragrant pinks, including Dianthus ‘Mrs Simkins’, and sources his supply mostly from Sutton’s Seeds, with odd specialist specimens from Sarah Raven, the famous cut-flower queen. New to me, a pale lavender blue lace flower, Didiscus caeruleus is apparently long-lasting and excellent for cutting. He also harvests the lavender, Lavandula x intermedia grossa to make Hackthorn lavender bags to sell on open garden days.

Of course, provisioning the family with fresh fruit and vegetables is the priority, some not so common, cape gooseberries, ‘turks turban’ squashes, and an unusual dark, purple climbing French bean ‘Blauhilde’ with pretty pink flowers. One quarter of the three-walled garden (the bottom of the garden is unusually open to the view), is taken up with a platoon of apple trees planted thirty years ago: Golden Delicious, Sunset, Bramley and Idared, a bright red, sweet apple with good keeping qualities. A wide variety of fruit trees, some old, espalier pears and cherries are neatly tied in to the original Victorian network of steel wires, seldom seen these days, latticing the rustic brick walls. Exotic fans of peach and spreading brown turkey fig brave outside elements on the north wall; with yet more peaches, apricots, melons and tomatoes growing in a tall glasshouse (1970’s) nearby.

Two older glasshouses, with curved ‘beaver-tail’ glass panes, have been carefully restored. The first, built in 1867 by a Nottingham firm, is home to a singular, memorable presence. At one time the gnarled, grape-vine, used to yield a 500 bunch harvest. Far too much work for one man, it was cut back considerably a while ago and now provides 250-300 bunches, nurtured carefully by being pruned back in early spring, then given a healthy 1000 gallon dose of water, always kept damp and syringed twice daily. The largest privately owned veteran vine, now an impressive thirty-three inches in diameter, is thought to be second only in age to the celebrated Hampton Court ‘Black Hamburgh’ vine planted in 1768 by royal gardener ‘Capability’ Brown. Was it just coincidence, exactly one hundred years later, when Head Gardener Mr William Popple planted the exact same variety in his brand new vine house? Remarkably, in its 143 years lifetime to date, this vine has been cared for by only six men – Mr Popple, Mr Clarke, and Mr Richards, Donald Moore with over fifty years service, then Simon Bowen, followed six years ago by Keith Donner. Hackthorn Hall gardens must have a contentment factor, obviously a great place to work!

Later we explored the setting for the elegant Georgian country house dating from the last decade of the eighteenth century. Architect James Lewis (1750/51–1820) designed the Yorkshire stone villa for his father-in-law John Cracroft, typically overlooking a panorama of parkland beyond a small lake. Keith has to balance his time between gardens, looking after the lawns and borders, tending new designs introduced by Bunny Guinness since 2000. Her most recent addition, a formal sunken garden with four quince trees, box-edged paths and urns, is focused on a walled seat surrounding an impressive lead cistern embellished with clear initials I & C, dated 1788. The serpentine pattern of intertwined box hedging on the terrace above is perfection. The length of the church walk by the house flower border, precision cutting takes one full day. The line is continued in the west garden, this time, in a pleached avenue of hornbeam enclosing a modern sculpture. A traditional great stone lion, guards the terrace walk overlooking this garden, sheltered by shrubs and featuring a charming rustic summerhouse (probably Victorian, perfect for tea and Edwardian croquet and tennis parties). Bunny Guinness has echoed the patterned wood cladding in a parterre structured with clipped mophead Holm oak trees and box hedges, softened with roses, Hydrangea ‘Annabelle’, lavender and echinacea, and under planted with alliums. A stone horse head sculpture creates the vista to the park.

I came away uplifted. The much-loved gardens permeate with a sense of history, conserved and re-invigorated by Bunny’s ideas, and tended by Keith’s patient, professionalism. Although using every modern tool and convenience, he reaps a thankfully plentiful, rich harvest by keeping an eighteenth and nineteenth century craft alive: ‘mixing the useful and profitable parts of Gard’ning with the Pleasurable’. Almost everywhere you walk in the gardens and the park, St Michael’s Church, (built by Charles Mainwaring and a peal of six bells added at the Millennium), in the heart of the landscape, is somewhere in view. Somehow this upright reminder of paradise seems almost superfluous, though, of course, the perfect place for a wedding – Hackthorn’s little bit of heaven.

See www.hackthorn-estate.com for information on Garden Open Days and for wedding receptions, private parties and events.