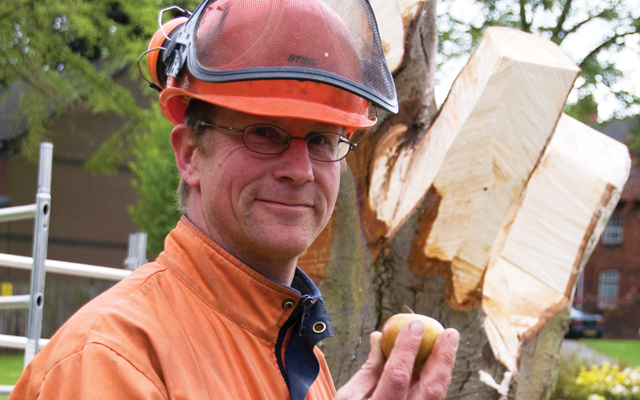 He who loves trees…

Steffie Shields meets a sculptor extraordinaire who is embellishing Lincolnshire landscapes.
Nigel Sardeson carves his name with pride, leaving his mark, not with a penknife, but with a chainsaw. Wood lends itself naturally to spontaneous artistic exploitation and may be whittled or chiselled, depending on density and quality, a patient, peaceful chore. Wielding a chainsaw to make decorative art is, however, a brave, noisy, dusty and quite drastic business.

Coming from Heckington farming roots, Nigel had little inclination towards agriculture, but loved outdoor life and was handy with a chainsaw. When the 1987 hurricane tore through southern England, toppling thousands of trees like matchsticks, Nigel phoned the National Trust looking for a job in forestry. “Come right away,” he was told, in the days before health and safety certificates. An eighteen month contract followed, a baptism of fire, clearing up devastation in iconic historic landscapes including Scotney Castle, Rudyard Kipling’s home at Batemans, Ightham Mote, Knole Park and Sissinghurst. He has been involved with forestry and conservation ever since.

While forester-in-charge at Cliveden in Buckinghamshire, motivated by an open day especially for children, Nigel decided to turn his forestry skills to carving creatures with his chainsaw out of odds of timber, and hid the animals in the woods to amuse the little ones. A commission from the Rothschild family followed at Waddesdon Manor, he transformed a fallen cedar into three life-size sculptures, a bear, a lion lying down and an elephant’s head looming out from a laurel bush. Moving back to Lincolnshire in 2001 to take up his current job as Trees and Woodlands Officer for Lincolnshire County Council, Nigel is settled in Potterhanworth with his wife Tina, and their children Toby and Tilly. Besides adding features to local horizons, the last three summers, he was delighted to be selected to participate in the prestigious Sculptree Event at Westonbirt Arboretum, in Gloucestershire; a week-long event, involving twelve of the country’s leading tree sculptors. Their artworks were then auctioned off to the highest bidder to raise money for the charity Tree Aid. This year he won a similar competition in the Isle of Wight.

As Honorary Chairman of the Lincolnshire Tree Awareness Group (TAG) Nigel recently collaborated in local naturalist Jane Ostler’s fascinating book, ‘40 Special Trees of Lincolnshire’ (2009). He is, however, never happier than when challenged by commissioning head teachers, given free rein or ideas from school children to create something for their playgrounds, he turns his mind’s eye to conjuring dragons, curly coated pigs, a family of gorillas, or sea serpents for children to climb all over. In discussing ideas with the nursery class at Fosse Way School, North Hykeham, they clamoured for a dragon or a dinosaur. He responded with ‘Komodo’, a suitably smooth komodo dragon, the world’s largest living lizard, with no dangerous, sharp points, but nonetheless suitably scary. Utilising twisty elm limbs from another school Nigel used their irregularities, crafting a ‘Liquorice Bench’ around a tree, as if made of bendy liquorice sleepers. A ‘Dragon’, made from three lengths of oak for Boston West Primary School, curls in a thirty-foot loop to seat a whole class! His latest creation there, in the middle of a new raised-bed vegetable garden, an eye-catching, upright ‘Pole of Plenty’ celebrates the wealth of plants and creatures in a garden.

Assuming he would be a farmer like his father, Nigel never studied art and is self-taught. His mother Sandra, realised from the time her four-year-old son was drawing Christmas cards, he had an ability to picture objects in three dimensions. Now he puts this gift to good use, part-time, a change from his mostly desk-bound, day job. Very often ideas come from sourcing the tree, where texture, shape and grain suggest a form, a touch-paper to his fertile imagination. He crafted a life-size oak ‘Gorilla’ for Elsham Hall in North Lincolnshire, emphasising the massiveness of the gorilla’s back and shoulders, with one hand palm-up as a seat. Two of his curvaceous female torsos, bought from Hall Farm’s sculpture exhibition, also feature in the walled gardens.
Over recent years the Lincolnshire Waterways Partnership commissioned several pieces for the ‘Tennyson Trail’ along the River Witham cycle path. One, hewn from sweet chestnut ‘River Pillar’ is engraved with a line from Tennyson’s poem ‘The Brook’: “For men may come and men may go, but I go on for ever”. Nigel’s largest commission to date recycled old lock gates at the Black Sluice, Boston. He took an adze and tungsten cutters to the tropical greenheart timbers that were riddled with nails and buried under barnacles and weed. His brother Mark acted as mate, plying the sander for long hours over the gates lying horizontal on the ground in Mark’s farm shed. Carving the dense wood was difficult, very hard on Nigel’s knees, and frustrating because it was impossible to stand back and judge progress from a distance. He hoped for the best until a fifty-ton crane finally lifted the huge, heavy gates into place, when he was relieved to see the shallow relief was effective. This 1930s-style graphic design is without doubt a triumph, paying powerful tribute to countless hard-labouring fen men who, during seventeenth and eighteenth century improvements, before mechanisation, changed Lincolnshire’s landscapes forever with wheelbarrow and spade.

Tree sculpture is more than meets the eye. Organising transportation and solving engineering problems to support a structure in place are all part of the equation. Developing his chainsaw technique over time, Nigel now makes more use of chisels and sanding for refinement, ever anxious not to lose the movement in the wood. Recognising when to leave well alone is critical. Pablo Picasso once said: “Sculpture is the art of the intelligence.” Nigel believes that if you concentrate on the detail you lose ‘the whole’; he wants others to enjoy seeing the thinking involved in creating a work. On the durability score, elm, oak, yew and cedar do well. Other woods require treatment to assure longevity as was the case concerning a diseased horse chestnut tree due for felling, that was to be the centrepiece of a new Sensory Garden in Wyndham Park, Grantham. Every visitor voices the question: how did he do it? I have witnessed young and old holding up a hand and looking from it to the sculpture and back again, trying to figure out just how he conceived the idea, let alone executed it. He took eight days to carve the shape, modelled on his own hand, together with the five continents of the world outlined on a giant apple, carved from a chunk of elm wood. Once again, his brother Mark was there to assist lifting the apple firmly into place before securing it with hidden bolts. The finished work conveys simply and effectively how Grantham’s local hero Isaac Newton discovered gravity. ’Isaac’s Apple’ is an appropriate tour de force.

The proverb “He who plants trees loves others besides himself” surely holds true for he who sculpts trees. Just as veteran trees are often pleasingly sculptural, especially as skeletal silhouettes in winter, so Nigel’s creative versatility has added much to our enjoyment of local views. I would not be surprised if some folks set out to follow a ‘Sardeson Trail’ across the county… it would be well worth the walk.