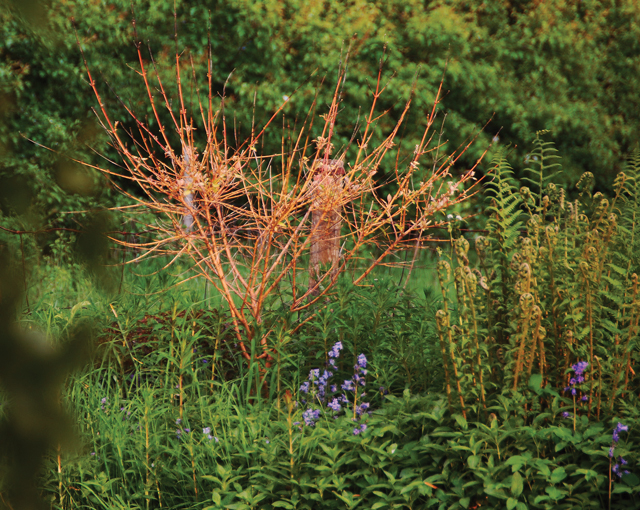 Steffie Shields focuses on Cornus, a splendid genus of shrubs and small trees for year-round interest.
Forgive me being ‘corny’, but I simply love Cornus! Every plant has its own unique story; cornus was once called the ‘whipple tree’ in Chaucer’s ‘Canterbury Tales’. Now more commonly known as dogwood, some say the term was actually derived from the Early English word ‘dagwood’ because its narrow, very hard wood was good for making daggers and arrows. Cornus is a good all-rounder, a deciduous shrub or small tree that earns its keep in every season of the year, and requires little attention other than the odd prune. Strong new growth and fresh coloured stems result from an annual spring coppice (pruning almost down to ground level). I am beginning to gather quite a varied collection in my garden, and so have been amused to find its place in our cultural history.

Courting in Victorian times was markedly different to the way it is for twenty-first-century texters. Hopeful swains would present their chosen unmarried woman with a sprig of cornus as a sign of affection. (Funnily enough, around about Valentine’s Day is not a bad time to tackle cornus ‘coppicing’.) If the lady in question returned it, she was not interested, and the advance was spurned, end of story. If she kept it, however, this was a clear sign that the man’s amorous attention was discreetly welcomed.

Long before the age of the lens, plant names stemmed from common usage and close observation, interpreting the nature that was all around in terms of human experience, including relationships and little games of the heart. The slow-growing Chinese dogwood, Cornus kousa, for instance, has a habit of forming a heart-shaped silhouette between pairs of leaves; particularly as it begins its subtle journey from summer green, gradually changing, to autumnal russet, red and orange shades, and bringing warmth to the October garden. The flowers are small and insignificant, but this is compensated from late May to early July by four striking ovate flower-like bracts that colour up from pink to creamy white – a real feature for six weeks – followed by small, deep pink, strawberry-like fruits. Cornus kousa copes with sun or partial shade and does not need hard pruning in spring like many standard varieties, supposedly preferring neutral to acid soil. The one I planted near the gate is tolerating my limestone. Its leaves and bracts may be smaller than the norm, but it still looks fabulous backlit by rays of the low setting sun and glows like a beacon of fire.

In August I came across a veteran Cornus mas (the cornelian cherry tree first introduced from eastern Europe in the sixteenth century) visiting Castle Ashby garden and arboretum in Northamptonshire. Thanks to images on the internet, I now realise this tree has ornamental acid yellow flowers in early spring; all the more striking because they appear on bare branches, similar to forsythia but even earlier, before the leaves appear. In addition the fruits are edible. It must be relatively rare in this neck of the woods as it has only just crossed my radar. I think I must add it to my ‘wish-list’, and visualise it under-planted with blue-flowering spring bulbs such as scillas or Chionodoxa luciliae. The Siberian Cornus alba ‘Spaethii’, like many more common dogwoods, has flowers but not the more striking flowering bracts. Nevertheless, with lime yellow edged variegated leaves it takes on a painterly appearance as if coloured with strokes of a paintbrush.

Apparently the RHS Rosemoor garden in Devon has one of the National Collections of Cornus (dogwoods). Nearer, and worth a visit, the Bluebell Nursery in South Derbyshire is an award-winning, traditional working nursery and woodland, specialising in rare and unusual trees, shrubs and conifers They have an improved variety of Cornus kousa called China Girl. Of course gardens such as Anglesey Abbey and Hodso ck Priory are famous for their winter snowdrop walks, where the vibrant red and plum coppiced stems of cornus vie with willow for attention, particularly the popular orange-red Cornus ‘Midwinter Fire’. I prefer the more subtle yellowy to lime-green hues of the stems of Cornus stolonifera, sometimes called the ‘golden twig dogwood’.

I adore dappled light on dappled leaves, particularly in this season of mists and autumn colour. Some folks are wary of variegated shrubs, nervous of making their garden look like a supermarket car park boundary or municipal park. The solution is to not place too many varieties together – just allow one variegated shrub its place to shine.

With a soft and natural habit, variegated dogwood is ideal for an informal or country garden and will bring a shady corner to life, preferably against a contrasting evergreen backdrop such as yew or laurel. Cornus controversa variegata is another one that often takes years to grow. Its eye-catching light green foliage, broadly margined with cream, turns yellow as the autumn temperatures drop. Owing to its unusual tiered habit of growth and small, cream flowers in flat clusters, this cornus has acquired the common name of wedding cake tree. You see, you cannot escape the romance of the genus!