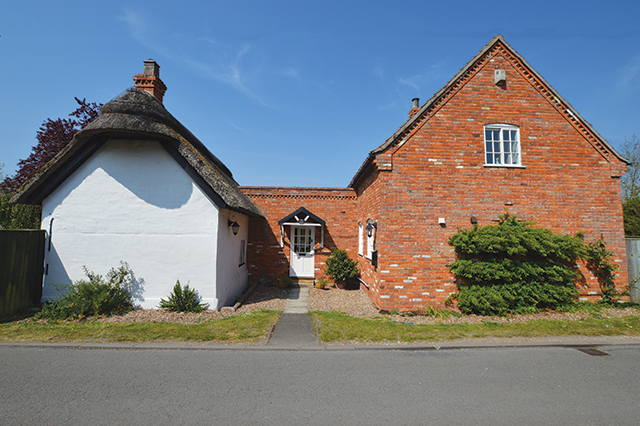 Rose Cottage offers a unique opportunity to purchase a property steeped in county connections which offers both spacious accommodation as well as the potential to continue a successful bed and breakfast business.
The current owners have lived at Rose Cottage for over thirteen years. It was a property they were smitten with after the first viewing and despite looking elsewhere, were drawn back to, eventually securing its purchase in May 2004. Thoughtfully extended over the past decade and more, the house is now an exceptional family home over two floors, with four en-suite bedrooms, three sitting rooms as well as further spacious accommodation and private gardens.

The Grade II listed building which dates from 1604 retains many original features including exposed oak floorboards and beams. Although the property needed some TLC in parts, the fabric of the building was sound. The front wall is brick while the remaining walls are built of traditional Lincolnshire mud and stud, complete with a Norfolk Reed thatched roof. More recent extensions were completed in reclaimed brick under a pantile roof.

Research that the current owner has conducted about the bricks which make up the front wall has led her to believe that they were made at Tattershall Castle. She attended a talk at the Castle where it was mentioned that the bricks were a unique size and mix. When she returned home she found the bricks at Rose Cottage to be the same and had a very romantic idea of the bricks floating up the river from the brickworks at the Castle in the dead of night on a boat and then the builder scratching his head to think what he could use to build the remainder.She also discovered that a second identical property was constructed where the dining room/kitchen is now sited. The base stones were found near to the current rear fence. Keen to continue the ethos of recycling building materials, a new use was found for these in the construction of the new Cairn Garden at Kirkby on Bain School where the owner was a Governor and the couple’s son was a pupil.

Rose Cottage’s location once positioned it on the edge of the Brocklesby Estate possibly as a foreman’s cottage. It was owned by the Fenn family and locally known as ‘Auntie’s Cottage’. The owners have supplied the black and white image taken in the early twentieth century. Could it perhaps be Auntie in the picture? At the time nine people lived in the one up, one down cottage; two adults and seven children in the tiny ground floor room with a wooden ladder to access the upper room.

In the late 1980s then owner John Popkin renovated the cottage extending it to include a staircase and bathroom.The new staircase was built using the old roof timbers when the property was restored to Norfolk Reed thatch. The main body of the house was also built at this time again using reclaimed recycled materials from the local piggeries. This reclaimed brick carries the Horncastle brickworks stamp which is rare to find these days. The wood over the fireplace in the second sitting room came from the wharf at the end of the lane. Here you can still see the rope marks where it was once used to support the barges along the canal and river Bain.

Rose Cottage has certainly provided the ideal family home they were looking for. With the birth of their son imminent it was a case of rolling up their sleeves to complete the cosmetic improvements which were initially needed. Once their family was complete they began to consider the further minor renovations which would make the bed and breakfast accommodation a reality.

The improvements have been completed to a high specification throughout. The kitchen/dining room has fitted Murdoch Troon units as well as a Belfast sink and range cooker. Each bedroom has its own en-suite bathroom offering very comfortable accommodation for guests as well as sitting rooms which can be dedicated to B&B visitors. The new Courtyard Room was constructed approximately ten years ago and although it was intended to be an extension to the family living room it was opted to became a second guest room due to popular demand. Today, it would also make a superb ‘Granny Annexe’ offering privacy yet all the amenities of the family home.

It was a challenging time, with renovations happening while a toddler also began to find his feet. The whole house seemed to be having a make-over but there are also fond memories.The major kitchen renovations were a particular challenge especially when the school requested egg sandwiches for the school Christmas party. Taking along tomatoes or crisps would have been ideal but using a board on top of a fridge under the canopy outside, the sandwiches were delivered. Now favourite aspects of the house include snuggling up in front of the log burner on a cold winter’s evening and using the reception and sitting rooms for family parties and chatting with guests over a glass of wine.

Outside the mature landscaped, south facing gardens show no trace of their overgrown state a decade or more ago and the courtyard canopy means this space can be enjoyed all year round, offering cool shade in the summer and protection from the elements in the winter. There is also a detached garage/workshop.

Kirkby on Bain is one of the county’s most attractive villages, within easy driving distance of Horncastle and Woodhall Spa. There is a nursery and primary school close by and village pub The Ebrington Arms is a must for guests and locals alike. This is a vibrant and friendly community rooted within exceptional countryside.

Above all, Rose Cottage has been a very happy house. The cottage offers a calm relaxing space, as do the private gardens. The kitchen especially always seems to be the hub where people collect. Family as well as the many guests find it a warm, welcoming place with something always going on. Many of the guests come back year after year and Rose Cottage has been awarded a Trip Advisor Certificate of Excellence. The family have enjoyed watching their son grow up in this safe and charming home and they have loved sharing it with visitors to the county. It will now be up to the new owners how they choose to use this versatile home and business opportunity.