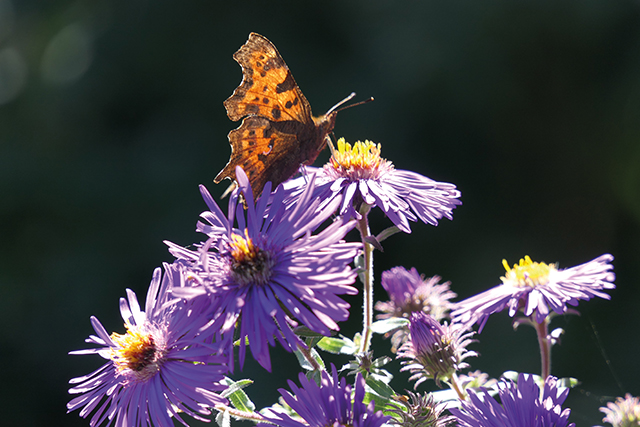 Steffie Shields finds inspiration for an August palette from a hillside garden in Woolsthorpe.
Fascinating gardens and designed park landscapes can conjure up the furthest corners of our world. While today there are mounting concerns about global warming and pollution affecting our seas and plant-life across all continents, it is also worth recalling an equally powerful passion for plants which originally gave rise to heroic bravery from those few men eager to explore the distant wilds of the planet. It is this fourth sense that I love… the human history linked to scientific exploration and the spread of gardening skills to nurture Mother Nature’s treasure trove.

Hard to believe, for instance, the total number of species that now enrich our island are due to one father, royal gardener John Tradescant the Elder (c. 1570s –1638) together with his son John Tradescant the Younger. Thanks to their life-long efforts and dedication, they are associated with 750 plants and trees! Besides of course the North American herbaceous perennial Tradescantia commonly known as ‘Spiderwort’ or ‘Trinity flower’, the tri-petalled blue flowers popular for borders, the Tradescants introduced Liriodendron tulipifera or tulip tree, black walnut, mulberry, Michaelmas Daisies, passion flower, wisteria (from Russia), cyclamen, and hellebores. It seems appropriate that the church of St Mary-at-Lambeth, (de-consecrated) near the River Thames, should now house the Garden Museum. Outside in the churchyard a replica of the original weathered monument, decorated with intricate carvings of exotic trees, foreign scenes and creatures marks the final resting place of members of the intrepid collectors of the Tradescant family.

The great age of plant hunters was in the 18th and 19th centuries until the outbreak of the First World War. Some say their drive was to both find and name new plants for posterity, or to have a plant named after them. Somehow, I doubt it. Over long periods, sometimes years, away from loved ones and home, they braved perilous sea journeys and river crossings, horrendous disease, aggressive natives or bandits in far-off, dangerous terrains and virtually unknown territories. How and why were gardeners and nurserymen trained as horticulturalists so keen to risk their lives to recognise and record new species, and to collect seeds, bulbs or rarely-seen specimens, and who trained them in the first place?

Fiona Davison, librarian of the Royal Horticultural Society’s Lindley Library, has written an engaging book to answer many of these queries: The Hidden Horticulturists. In 2012, whilst working at the library, Fiona discovered an unusual book of handwritten, copperplate notes dating back to 1822. This contained entries carefully penned by young gardeners to show off their education in support of their application to be received into the Society’s garden which had been established at Chiswick.

Fiona brings to life the highlights and some remarkable stories of the young, working-class men who also played a central role in the history of British horticulture. The trail took her from the Royal Society’s garden at Chiswick to Bolivia and uncovered tales of fraud, scandal and madness – and, of course, a large number of fabulous plants and gardens. I was intrigued to read that some of her tales relate to young gardeners from Lincolnshire.

One John Collinson, for instance, followed in the footsteps of his father who was gardener to General Manners at Bloxholm Hall, a fine mid-17th century house in the Artisan Mannerist style, before setting up as a market gardener in Dorrington. After an apprenticeship at Gainsborough, young John had served four years in the Duke of Portland’s garden at Welbeck, before being admitted to the prestigious RHS Chiswick garden in March 1825. The young Joseph Paxton (1803-1865) followed a year later. Paxton is known to have worked to create a small park at Moortown House, in West Lindsey. Thanks to his specialist training at Chiswick he went on to be described as ‘the greatest gardener of his time’. Meanwhile, another Collinson brother, George, went to work at Stubton Hall after Chiswick; a third, as garden fashions were changing and spreading, set himself up at Scopwick as a ‘cottage gardener’.
With a huge helping of curiosity, determination, and ‘Endeavour’, one of the greatest botanists was Lincolnshire’s famous son Sir Joseph Banks (1743-1820) whose Bicentenary will be celebrated in 2020. In 1770 Joseph Banks and Daniel Solander arrived at Botany Bay with Captain James Cook. They collected specimens of eucalyptus trees. Hence these trees are found in the Dawber Garden in the middle of Lincoln City, which was created (in the 1990s) as a salute to Banks’s explorations.

Fiona writes: ‘Banks’s original vision for George III’s great garden at Kew was as “a great exchange house” of scientifically and economically valuable plants. As founder president of the Royal Horticultural Society, Banks saw huge potential for plant life to assist the developing world and appreciated a growing need for trained horticulturalists. He recognised the value of experimenting with exotics and exploiting foreign food sources such as bread fruit and tea and materials.

Today several specialist collectors and nurserymen still travel widely to source unusual specimens and seeds for their collections. Bleddyn and Sue Wynn-Jones, of Crûg Farm Plants in North Wales, for example, recognised as Britain’s leading plant hunters, are determined to address ethical aspects by building up relationships with local botanists. “Most Vietnamese botanists only know their tropical flora,” says Bleddyn. “We are interested in hardy temperate plants in the mountains in the north, so we can help them with new material.” Specialist nurserymen, Ann and Bob Armstrong at Fotherby source plants from Crûg Farm Plants.

A single garden visit, a single leaf or flower, or unusual tree bark that stops us in our tracks can summon up a different era. When first embarking on a garden visit, preferably with no previous information, I have no idea what I might find around every corner or turn of the path. Plant hunters of old must have felt similar, if much stronger, frissons of anticipation and then the odd, exciting revelatory moment of magic, or thrill. The difference – worlds apart – is that most of my explorations are within reasonably safe confines, and relatively bearable and mostly balmy temperatures, surveying our county parks and gardens.

However, now that I have enjoyed reading Fiona’s unusual history of these early, little-known horticulturalists, it will trigger an awareness of unusual specimens. I will enjoy photographing and thinking about their remarkable legacy with gratitude, for they have educated our imaginations by enriching all our local landscapes and gardens, great and small. I do recommend her celebration of the unsung heroes of horticulture who continue to influence how we garden today. Their achievements reflect a golden moment in British gardening. Over 100 years since the men set off on their travels, the RHS calls on horticulturists to start their own plant-finding missions, and through its bursary scheme encourages plant-hunting in the field to continue today.

Fiona Davison will be speaking about her research and new book The Hidden Horticulturists on Saturday 16th November, 2pm, at the Bailgate Methodist Church, Lincoln, as keynote speaker at the Lincolnshire Gardens Trust AGM. Book online at www.lincolnshiregardenstrust.org