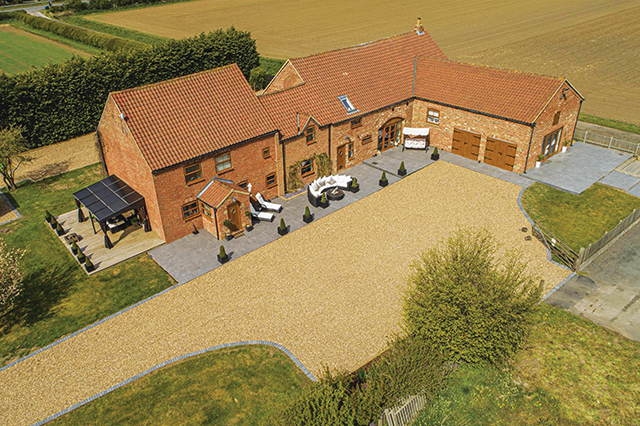 Manor Farm is an idyllic barn conversion in a peaceful rural setting which has been lovingly modernised and refurbished to the highest standard.

Ideally situated just outside the popular village location of Saxilby, Manor Farm is a stunning 400-year-old barn conversion ideal for family life in a pretty and peaceful setting with outstanding views.

Home to the Hallam family for the past six years, John and his wife Paris moved to this stylish five bedroom property with their three children from their previous home in Sudbrooke.

The couple went in search of a perfect contemporary home in a peaceful location which would not only provide somewhere to entertain family and friends, but also with enough space to launch their bespoke luxury spa business, Pure Spa, in a relaxed setting and Manor Farm proved more than ideal.

“The main reason for purchasing Manor Farm, which is so calm, quiet and peaceful, was to open a relaxing spa where beauty, hair and massage/spa treatments were all accessible under one roof in a tranquil environment,” explains Paris Hallam. “We were also looking for somewhere which was ideal for entertaining, as well as providing general relaxation space for our family. We immediately knew this house was for us, not only to accommodate our business plans, but also for us as a family in general.”

Having recently undergone an extensive range of modernisation and refurbishment to the highest of standards, updated improvements include a full smart heating scheme installed using Honeywell evohome controls, with underfloor heating and smart lighting.

A perfect blend of tradition and modern convenience, with many striking original features retained, all main rooms benefit from oak features offering unique character alongside many high-quality modern fixtures and fittings throughout.

“We’re lucky that John works with a company that uses the highest quality artisan trades and craftsmen, who have been used to modernise the property,” explains Paris. “The first work undertaken by us was to overhaul the heating and light systems, which have been future-proofed to be easily switched to the ever developing sustainability future. The heating can be easily swapped over to biomass, ground source heat pumps or solar thermal.”

With a fascinating history dating back 400 years, the property, which featured on a map of the famous Tom Otter murder/ghost story, was originally home to the families who worked on the farm and although originally there were many other parts of the building, some have been demolished over the years.

“Many original features have been retained, including stonework, beams, a pulley hoist and the bottle well which runs under the spa/annexe,” says Paris. “One of the beams in the property has been dated back to the same period when Lincoln Cathedral was built and there is also an old wash house building currently used as an extension of the spa as an aesthetics room.”

While keeping as many of the original features as possible, the interior incorporates the highest quality materials such as replacing pine woodwork with solid oak.

The original gull wing staircase which ascends from the handsome hallway has been refurbished using solid oak treads and laminated glass, providing a stylish open entrance linking both the east barn conversion and the west original farm house side.

The east barn conversion also has a massive brick inglenook wood/coal burner in the spacious lounge, which also has the original sack hoist still in position.

This open plan, luxurious house offers easy living with two large reception rooms, both with Amtico floors and underfloor heating, and four bedrooms upstairs, all with ensuites, and two bedrooms downstairs which share a large bathroom, with a further bedroom in the annexe.

John and Paris have many fond memories of parties, get-togethers and sharing special occasions with friends and family at Manor Farm.

“The house has the most wonderful calm feeling,” says Paris. “Sitting in the main lounge in the evenings with the huge fireplace and log burner on with a glass of wine is so relaxing. Every Christmas we put up a 16ft tree in the main lounge which has a double height ceiling flooded with natural light, thanks to the fully double-glazed wood effect windows.

“The lounge, which was the main part of the original barn, is undoubtedly our favourite place and the room we spend most of our time in. The views of the fields are beautiful from here and there are windows or doors on three sides. The room is warm in the winter and cool in the summer and with no immediate neighbours, it’s perfect for switching off and enjoying some quiet time.”

With multiple seating and eating areas inside and out, John and Paris have enjoyed hosting numerous parties over the years.

“We have held a lot of big birthdays for our children, relatives and ourselves during the past six years. Prior to lockdown, we hosted a large Christmas family gathering for John’s mum, two brothers and their families around one large table which was simply magical!”

Outside, a sweeping private driveway provides access via a five-bar gate which leads to the generous grounds space and immaculate gardens, which feature various patio and decked entertainment areas boasting field views, two bay stable block and tack room, and large lawned areas with a mixture of mature fruit trees flooded by sunshine throughout the day. “We have a sit on lawnmower and the farmer cuts the hedges for us once a year,” says Paris.

The grounds and well-presented gardens of 1.08 acres also contain an old period brick built wash house which has been converted into an independent office providing a peaceful home working experience.

The annexe, which was originally a four-car garage with an office, features a large main room, kitchen, treatment room and shower, and is currently used as a hair and beauty spa, but has been cleverly designed so that it could easily be converted into a two-bedroom annexe with open plan living area.

“We have successfully raised rare white peacocks while living here, which are a beautiful feature for clients visiting the spa as they are very tame, and we also have three white oriental cats.”

Although the stables and tack room are currently used as a workshop and materials storage area, as well as housing the all-important ride-on lawnmower, this could be used for horses in the future.

During the week John divides his time between travelling to London where he works with a construction company undertaking super prime high end residential properties, and working in his home office on lengthy conference calls, while Paris works in and manages the spa.

Weekends are spent with family activities and the couple have made many friends locally too.

“Saxilby is a village full of friendly people and lots of amenities. We have great pubs and handy retail shops, as well as three takeaways and an amazing village hall with lots of group activities. Our favourite place to visit is Doddington Hall with its farm shop and restaurant. The schooling is very good in the village too. It’s a great place for families.”

Since the couple’s two youngest children, Canen and Karis, have moved out of the family home to follow their careers after university, John and Paris now share this large property with oldest son Kai, who will also soon be moving to his own place.

“With our spa client base having grown rapidly over the years, we’re now on the move to somewhere where we can expand our spa business,” says Paris. “We will miss the views, beauty and tranquillity.

“We have enjoyed a wonderful six years at Manor Farm and we will take some precious memories with us, but we hope the new owners will enjoy living there as much as we have.”